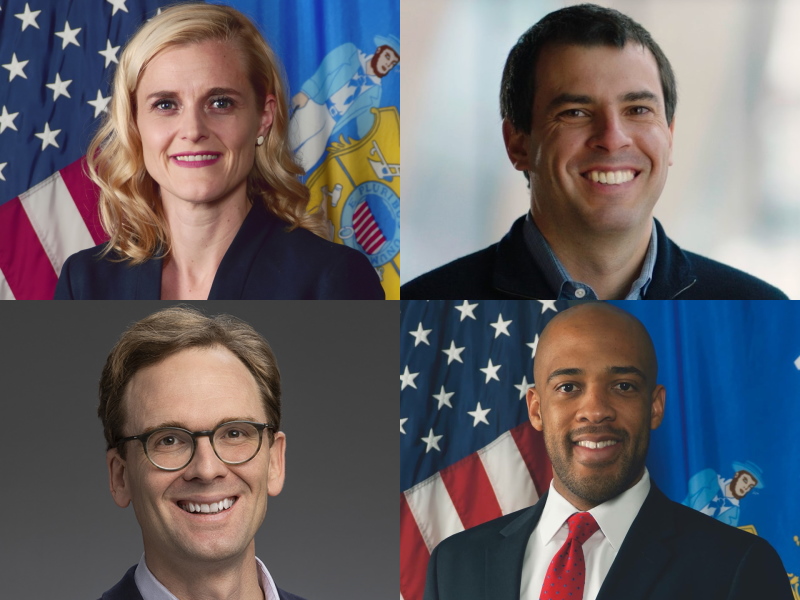 The Democratic primary for U.S. Senator started very early: it was back in October that Outagamie County Executive Tom Nelson, the former majority leader of the Wisconsin Assembly, announced he would run for the seat now held by Republican Ron Johnson. That was more than two years before the November 2022 election, signaling how important this race is. Experts expect it to be one of the top targets for Democrats in the country.

With that in mind Lasry dropped a bomb in early April, announcing he had raised more than $1 million in the first quarter of 2021, just 43 days after announcing his candidacy. It was a warning to all the other candidates that Lasry, whose father is one of the richest people on the planet, will be able to raise tons of money for this campaign.

Lasry finished the first quarter of 2021 with $1,086,812 in contributions. By comparison Nelson raised just $263,000 in the first quarter, and Godlewski, who has just entered the campaign, has nothing to announce at this point.

Lasry has also announced a long list of endorsements from about a dozen Milwaukee political officials, many of them African American, including Milwaukee County Executive David Crowley and Common Council President Cavalier Johnson. The message to Barnes is that Lasry has sewn up the power structure in the Lt. Governor’s home base.

Yet Democratic observers I talked to think there is still a good chance that Barnes will enter the race. And they rate Barnes, should he decide to run, as the front runner for the Democratic nomination.

“If Barnes gets in, all the cards get reshuffled,” says longtime Democratic politico Evan Zeppos, “because he brings a base of Milwaukee supporters, appeal to African American voters and more statewide name recognition than any of the others.”

Get a daily rundown of the top stories on Urban Milwaukee
And he likely takes votes from Lasry, Zeppos notes, and “Lasry must have a strong Milwaukee base to be competitive.” Barnes might also take away some of those endorsements from Lasry, as some officials decide to switch or stay neutral.

If Barnes stays out, Lasry still faces a formidable opponent in Godlewski, who also won a statewide position in 2018, though State Treasurer is a lower-profile office than Lt Governor. But Godlewski is under consideration for funding from Emily’s List, which has targeted this as a key race. She also has a wealthy husband, so is likely to be well-financed in this race.

And money will be a huge factor in this race. “If you think you’ve seen a lot of spending in past elections, prepare to be dumbfounded,” says Democratic consultant Joe Zepecki. “This will be by far the most expensive campaign in state history.”

Lasry’s access to wealthy donors certainly helps him. But it also hurts. More than 50% of the $1 million he raised came from the New York area, the campaign concedes, which reinforces the idea that Lasry lacks deep roots in Wisconsin. (73% of the money raised by Nelson was from Wisconsin.) “Alex is a great guy, but I’m not sure Wisconsin is ready to support a transplanted New Yorker as its senator,” Zeppos says.

Nor will his donations from various NBA officials. It’s a reminder that Lasry’s father benefitted from a taxpayer subsidy of hundreds of millions for the Milwaukee Bucks’ new arena, something which surveys show voters typically oppose. Opponents of Alec Lasry might also note he was fresh out of New York University with his masters in business administration when he was handed a job as the team’s Vice President of Strategy & Operations.

Assuming Barnes doesn’t run, Lasry will have a base in Milwaukee, Godlewski in Madison and Nelson in the Fox Valley. That leaves western and northern Wisconsin up for grabs and it remains to be seen if Lasry, whose message so far has been Milwaukee-centric, can appeal to those voters. Godlewski, who is already barnstorming the state, has a secret weapon: the job of State Treasurer has few duties, which should leave her lots of time for campaigning over the next 18 months of the primary election.

There’s not likely to be that much difference between the candidates on the issues. Nelson, who was a Democratic delegate for Vermont Sen. Bernie Sanders in 2020, echoes many of the economic and social messages that Sanders raised in his presidential bids. But all three candidates are mostly hammering away at Ron Johnson, whose extremist conservative views leave plenty to attack.

But what if Johnson doesn’t run? His campaign took in $545,337 in the first quarter of 2021 and ended March with $1 million cash on hand. No one in either party has any idea what Johnson will do.

But some Democrats don’t believe it will matter if Johnson bows out. As one insider noted, “every single Republican who is liable to run was right with Johnson on issues like contesting the presidential election and opposing Covid safeguards.”

There is another Democratic candidate, Dr. Gillian Battino, but she has little name recognition and has raised little money. Also exploring a run is Steven Olikara, founder of Millennial Action Project, the largest nonpartisan organization of young lawmakers in the U.S. That might change the campaign, adding a fresh face with potential appeal for younger voters.

Whoever wins the primary, they should have plenty of funding for the general election. Odds are it will be a high-profile, nationalized, red-versus-blue race, where the money will be pouring in from both parties.