By Isiah Holmes, Wisconsin Examiner - Apr 15th, 2021 03:59 pm
Get a daily rundown of the top stories on Urban Milwaukee 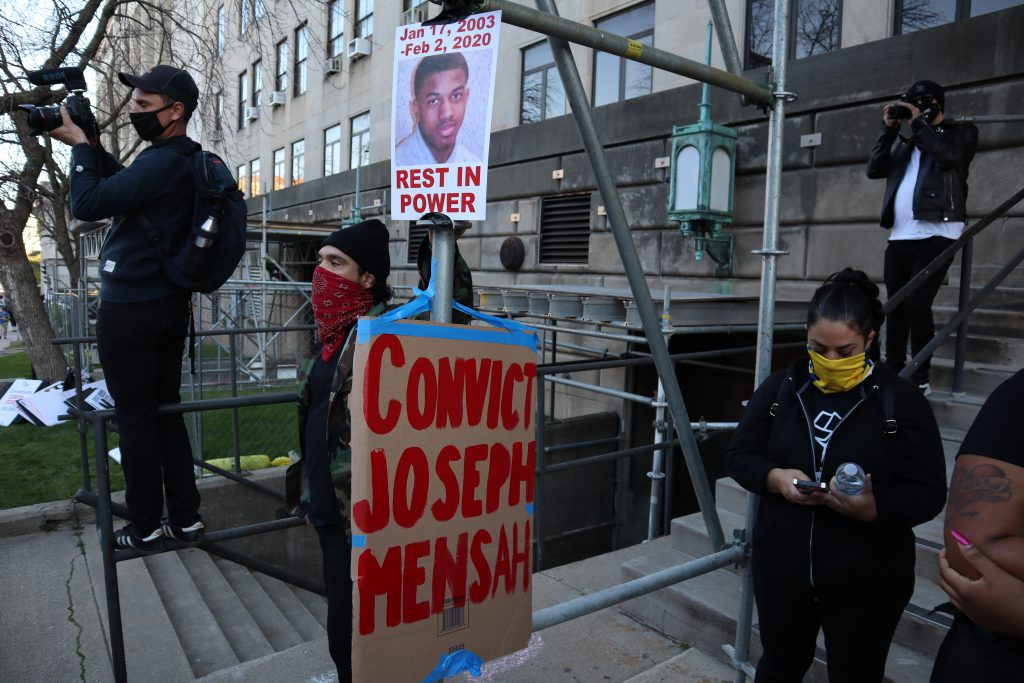 Protesters gather outside of the Milwaukee Safety Building waiting for the Cole family to come out with DA Chisholm’s decision. Photo by Isiah Holmes/Wisconsin Examiner.

On April 8, Wisconsin Examiner reported on documents indicating that the Milwaukee District Attorney’s announcement of a decision in the shooting of 17-year-old Alvin Cole by a former Wauwatosa officer was delayed due to the ongoing unrest in Kenosha. The records, obtained through Freedom of Information Act requests with the U.S. Marshals Service, also suggested that law enforcement anticipated a clearance in the case more than a month in advance.

Milwaukee County District Attorney John Chisholm has responded to the finds, and shed light on the decisions that were made during those tense days. “The fact is that I never tell them [law enforcement] that there’s going to be a date for a clearance,” Chisholm told Wisconsin Examiner. “What I do is I give them a decision date, so they can interpret that however they want. And in fairness, there was no secret here as to what the likely outcome was going to be. And there was no secret for the attorneys representing the family or anybody involved. Because we had spent so much time just exhaustively going through all of the different facts.”

Cole was shot in February 2020. Six months later the shooting of 29-year-old Jacob Blake triggered days of unrest in Kenosha. “We had started the process of what we always do, which is gathering all of the information and then allowing the family’s attorneys to see what we have,” said Chisholm. “And it was right around that time, right around mid-March that the public health emergency was declared. And then that really disrupted the normal process, substantially.”

By June, when the district attorney was preparing to sit down with Cole’s family, George Floyd was killed. Kenosha would follow just a few months later. “None of my decisions are predicated on making it easier for anybody,” said Chisholm.“ But what they are … It’s just a practical acknowledgment that I do have to factor in whatever dynamics might be in place so that people can be properly prepared to keep the situation safe and under control. That’s just an obligation I would have, in any case — to put some thought and some level of communication and coordination in place so that there’s adequate resources available to respond to a problem. Just to protect life and property, under any potential scenario.”

“I don’t tell people ahead of time,” what the decision in an officer-involved incident is going to be, he said. Due to the process of evaluating and potentially issuing charges in a case, attorneys and law enforcement may be able to “read into” what may come next. “But it’s not done explicitly,” said Chisholm. “Any of the information that’s communicated is done just so that people can balance a lot of things.”

“It wasn’t just Kenosha,” he added. “At the same time you were preparing for general elections, primary elections. … Doing so in a pandemic context was potentially going to require additional National Guard resources for polling sites to keep them safe and accessible. There were a period of different considerations going into the timing of it. Not the least of which is the public’s right to actually hear what the decision is and having the press have access to me under these circumstances, has to be factored in as well.”