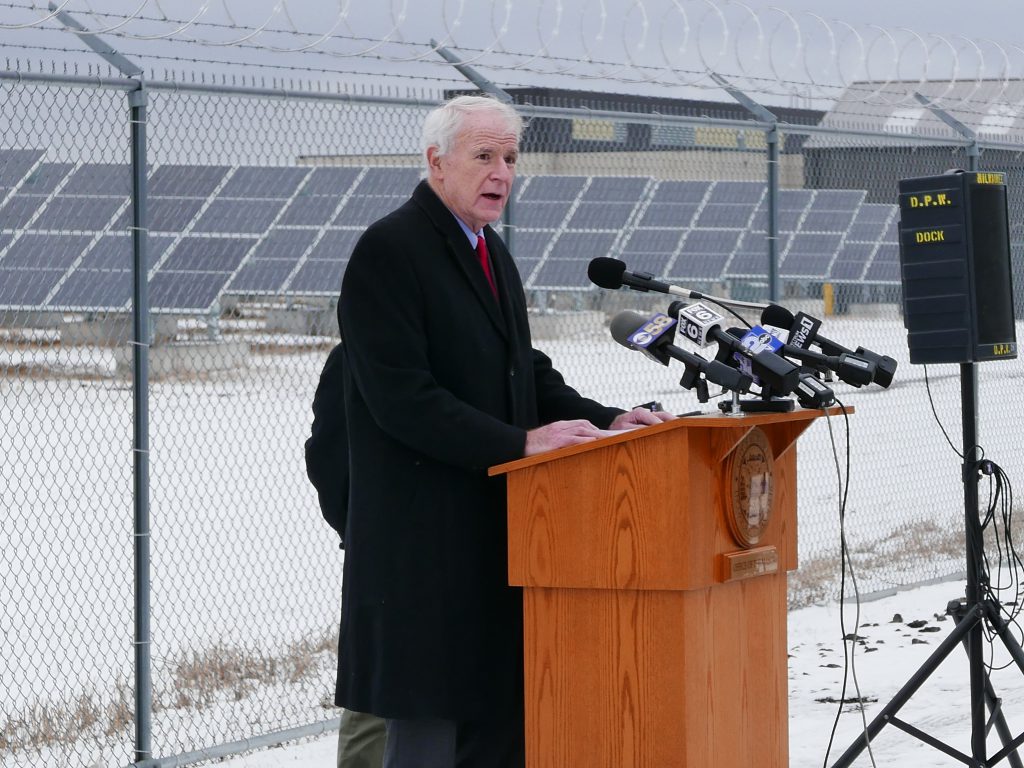 Mayor Tom Barrett speaks at the opening of a new solar installation at 1600 E. College Ave. Photo by Graham Kilmer.

The new array is the result of a partnership between the City of Milwaukee and We Energies.

The utility company built the solar installation on top of a former landfill at 1600 E. College Ave. that is owned by the Redevelopment Authority of the City of Milwaukee, on the southeastern edge of Milwaukee Mitchell International Airport.

The new installation has more than 7,000 solar panels producing 2.25 megawatts of electricity, which is enough to power approximately 500 homes.

“This really is an amazing step forward for us,” Mayor Tom Barrett said at a press conference outside of the new solar installation Tuesday. His administration has committed to having 25% of the city’s energy generation come from renewable sources by 2025.

“You don’t need a weatherman to know which way the wind is blowing,” said Barrett, waxing Dylan-esque. “And clearly the trend is moving faster and faster toward renewable resources and that’s good for us.”

We Energies funded the development of the installation as part of its Solar Now program and will have ownership of the electricity generated, feeding it into the power grid. The city will claim renewable energy certificates for the site, which are often purchased by corporations attempting to achieve sustainability goals.

The utility company is also making annual payments of $90,000 to the city for the site, which Barrett said would be used to fund additional sustainability efforts. This year the funding will go toward developing a climate and equity plan for the city.

Get a daily rundown of the top stories on Urban Milwaukee
The new array is in Ald. Scott Spiker’s district. He said the project represented “progress on the battle against climate change.”

It’s not only the largest solar project in the city’s history, but accomplishes this using land that can not be developed for another use, because the landfill is unstable and continues to settle. The new site is also just south of the 128th Air Refueling Wing of the Wisconsin National Guard, which will tap into the power source in the event of a failure in the energy grid.

Tom Metcalfe, president of We Energies, said the new solar site is “part of Wisconsin’s clean energy future.” It’s also part of the energy utility’s investment in renewables as it gradually moves away from fossil fuel generated energy.

Recently the company partnered with Harley-Davidson, installing 8,000 panels on top of its Pilgrim Road Powertrain Operations facility in Menomonee Falls. It has invested in a number of other solar energy and renewable energy storage projects around the state and has committed to reducing its carbon footprint by 40% from 2005 levels by 2030. 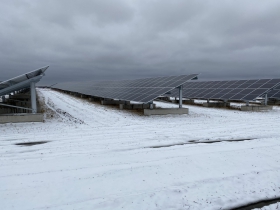 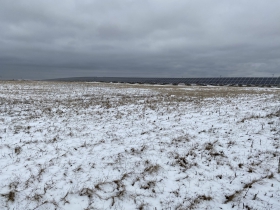 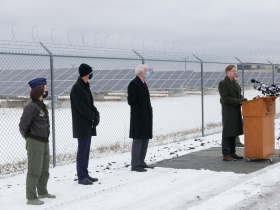