Why Marquette Will Endure

Whatever its troubles, university is mission-centered, with good leadership. 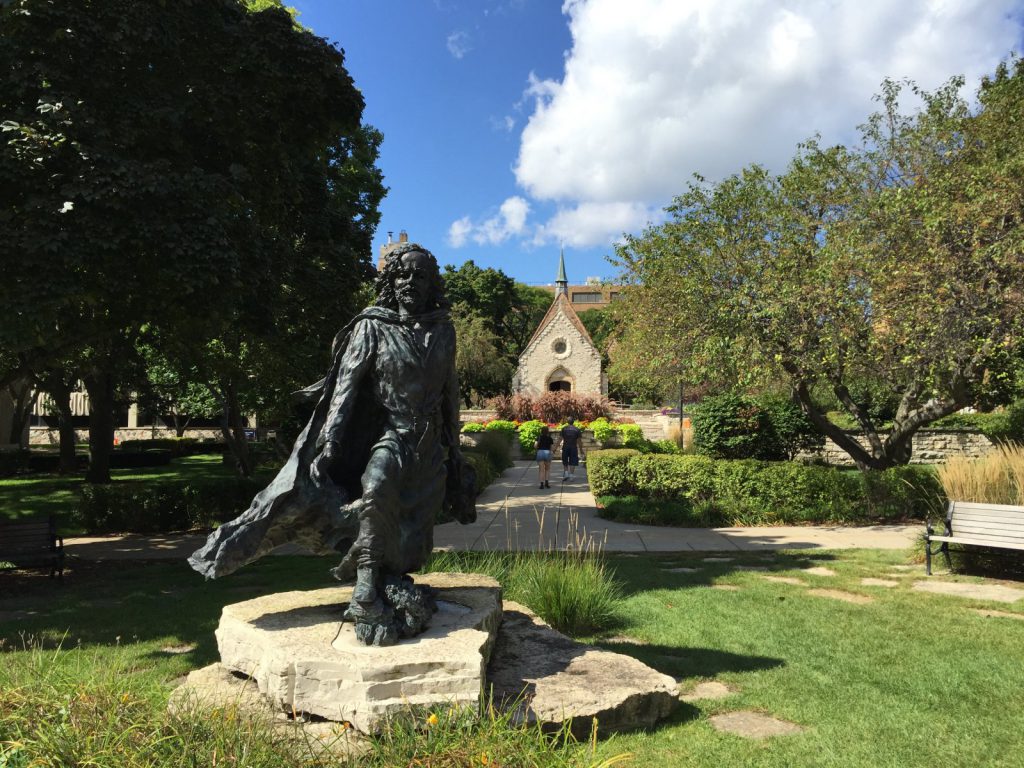 Father Marquette Statue on the campus of Marquette University. Photo by Dave Reid.

Marquette University is one of Milwaukee’s most critical institutions. The importance of what happens there goes well beyond the campus and transcends the current problems reported by Urban Milwaukee.

In hard and complex times, as our country has sadly learned, strong leadership is critical. Many years ago, an extraordinary teacher and mentor provided me with some basic lessons that have stuck over many decades. Each of them relates to the challenges faced by Marquette and any other institutions.

The first is the need for clarity, even when the picture is very complex and confusing. And, conversely, to understand that ambiguity is the enemy of action and destroys trust. In situations like the current one, we need clarity about what the problems are; what the realistic choices are; what the criteria for making those choices are; who decides; and how we communicate change to all of those who are affected. A tall order.

The second lesson he taught me was the responsibility to act on what you believe. Just thinking doesn’t cut it. You have to do something. That is to say, “It’s not academic.”

Universities are among the hardest organizations to lead. Unlike a corporation, government agency, or a non-profit, they lack a clear hierarchy. They consist of fiefdoms in the form of schools and departments. They are often led by people whose identification with that school or department is stronger than to the larger institution. And by people who lack what you would call an organizational perspective. As a result, universities are siloed. And silos make decision-making and getting everyone pulling in the same direction very difficult.

Universities also tend to have larger numbers of narcissists and passive-aggressive people than do other kinds of organizations, and to tolerate their behaviors. As a result, they are vulnerable to having decisions and actions undermined. They also value consensus over commitment, which means that every person in the room has a veto over any proposed action.

And academic life tends not to be action oriented. And sometimes, despite their advanced degrees, very smart people don’t fully grasp the challenges in running a large and complex institution. They tend to think of the leader as some sort of process consultant.

One result of these dynamics is that the efforts of hard-working, thoughtful and creative faculty and staff members often get buried in ambiguity and defeatism. Another result is that problem-solving gets sidetracked by blaming and blame avoidance.

My teacher and mentor also made another point that has enormous value for anyone trying to understand how to act in the current situation. It is to put yourself in the place of the leader and try to understand the choices and pressures he or she faces. That principle has particular resonance for a university in the midst of a pandemic, for a university confronting the challenges of long-term trends in higher education, and for a Jesuit university whose very identity is tied to a set of moral and ethical values.

In recent decades, a pernicious norm, hardly limited to the university, of “let’s shoot down the leader.” has gained increasing traction in our society.  The tendencies to judge people by the worst thing they have ever done or their biggest mistake, and to respond to anything good they have done with, “But what about….?” are now pretty normal in our culture.

Putting yourself in the leader’s place makes it harder for professors and others to criticize “a lack of transparency” and “a lack of shared governance,” whatever that means. Putting yourself in the leader’s place is a form of empathy. There is a theme that has emerged during the pandemic that has particular relevance to this situation and to these dynamics. It is a theme about a two-way street, one of which is “empathic leadership”, and the other what you might call “empathic followership.”

Everyone, regardless of their position or rank, is experiencing multiple feelings that all come under the heading of what one authority David Kessler defines as grief. But with the stages of grief all muddled together.  It is the leader’s role and responsibility to acknowledge these feelings, and that they affect everyone involved, faculty, students, staff, parents and others. But – and it is a big “but” – it is everyone’s responsibility to understand that leaders are far from immune to these same feelings, and that they are also subjected to pressures that are unique to their positions.

The reality in the present situation is that decisions have to be made, that there are competing interests, that there are often not shared values, that there is great uncertainty with respect to the immediate future, and that the clock is ticking. The leader is the one person who has to find a way to navigate the thicket of competing interests of trustees, schools, departments, students, parents and donors, all within a framework of Jesuit values.

What Marquette’s constituents and communities should appreciate and value is something that often goes unnoticed and unstated. The key to finding, and then acting on the best possible solutions to this crisis can be reduced to a single word: trust.

And this is Marquette’s great good fortune. Its President is as honorable and trustworthy a person as you are going to find running any major institution. As one Milwaukee philanthropist has said, “In this business, you’re always trying to figure out what someone’s angle is. And, usually, you can find it. But you can’t with Mike Lovell because he doesn’t have an angle. He just wants to do what’s right.”

It would be a grave mistake to underestimate the importance of the quality of trust, trustworthiness, and seeking to do the right thing. Especially in a Jesuit institution whose fundamentals, in addition to the value of learning, are peace, love, justice and inclusion. Here again, the need for empathic leadership and followership are core ingredients to long-term success.

On the leaders’ parts (plural), it means focusing on clarity in understanding the choices that are available, on real and active listening, and on effectively communicating decisions and the “whys” of change to diverse groups. None of that is ever easy, and some of it is counter-intuitive. For example, we know that the only effective way to communicate change is via front-line supervisors and not by top leaders; that it is pointless to try to communicate “values” as opposed to concrete decisions; and that the most effective way to communicate is face-to-face. Figuring out how to do those things in this environment is not easy, but they are the basics.

When, at some point in the not-too-distant future, we look at this horrible year in the rear-view mirror, a number of things are going to be clear. One will be that, in an environment of enormous uncertainty and limited knowledge, everyone made mistakes. Not to minimize those mistakes, they will have been made by leaders who were faced with really hard decisions. Not by those with the luxury of lobbing grenades from the sidelines. Many of these decisions unfortunately were between “bad” and “worse” because those were the realistic options. They will not have been between good and evil.

These leaders’ decisions will reflect an acceptance of difficult choices made in a less-than-zero sum environment. They are decisions made – of necessity – in small groups with usually imperfect information and projections, and not in “town halls” or by faculty groups that have many positive qualities, but also have trouble deciding what courses to include in their curriculum.

Marquette, and the broader community, should be thankful that, in a period of profound crisis, it has a trustworthy leader who is driven by the right moral, ethical and educational values. And, looking back, the most important measure of success in dealing with this crisis will be that everyone – across disciplines and ranks – should be able to say that we were all pulling in the same direction, toward a better future.