By Rich Kremer, Wisconsin Public Radio - Sep 10th, 2019 10:41 am
Get a daily rundown of the top stories on Urban Milwaukee 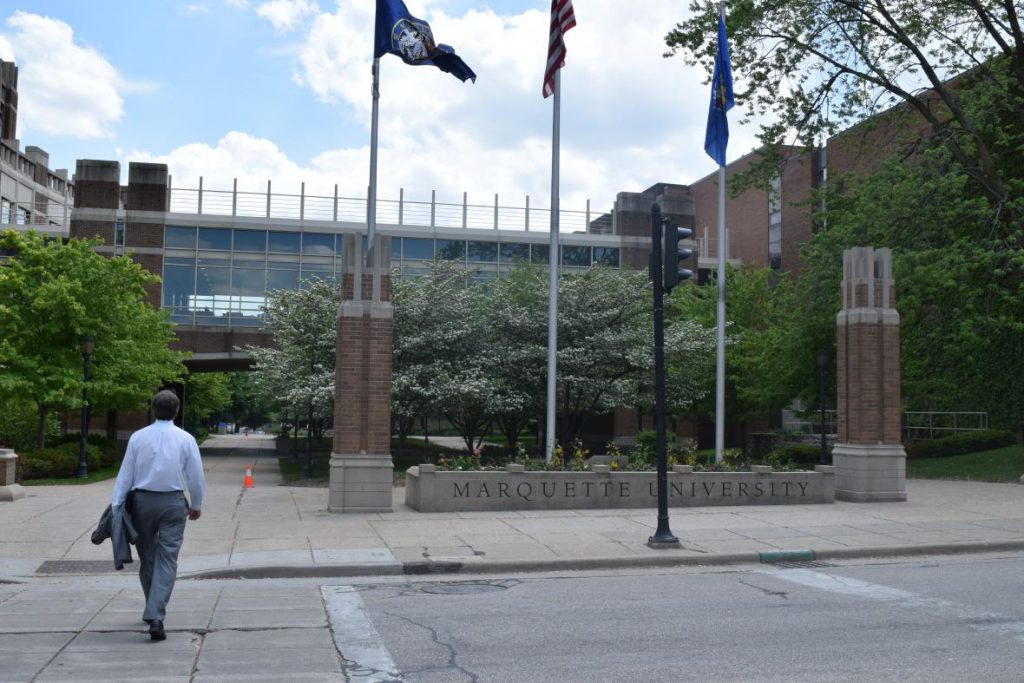 An expected decline of between 15 and 20 percent of college-age students by 2026 has prompted Marquette University to lay off two dozen employees and keep 49 current and future vacancies open.

In a campus-wide letter sent Thursday, Marquette President Michael Lovell wrote that “turbulence in higher education is affecting Marquette” and university leadership worked over the summer on ways to manage costs and become more efficient.

“The goal was to determine proactive solutions to remain financially strong, realizing we cannot continue to increase tuition at our recent pace because the burden is too great for our students and their families,” Lovell  said.

Last November the Marquette University Board of Trustees raised annual tuition to $43,350 from the $41,290 charged during the 2018-2019 academic year. Costs for graduate and professional programs also increased.

Lovell’s Thursday announcement also said that the Marquette University Police Department has been reorganized, its Graduate School and Graduate School of Management are being combined as are the campus’s Center for Engagement and Inclusion, the LGBTQ+ Resource Center and other offices for activities and Greek life.

The layoffs, vacancies and restructuring are meant to protect the university from a significant decline in the number of college-age students over the next seven years. In August, Lovell wrote another letter to the campus citing figures from economist Nathan Grawe of Carleton College in Minnesota that predict enrollment at Midwest universities will decline between 15 percent and 20 percent by 2026.

In an interview with WPR, Grawe said that during the Great Recession, post-secondary institutions saw an increase in enrollments but that wave has leveled off as the economy has improved.

“If you look at Wisconsin, you see that since about 2008 there’s been a fairly steady decline in students from about 71,000 to about 66,000 graduating,” said Grawe.

He added that the Great Recession also saw what he calls “a dramatic reduction” in the nation’s fertility rate which will hit higher education over the next decade.

“So, as an administrator who’s planning for the future, you see fewer enrollments in the present and you look forward and see a continuation of declining enrollments in the future that creates in many institutions the need to think about, ‘OK, how do we respond to this changing environment?” Grawe said.

Sumana Chattopadhyay, an associate professor of digital media at Marquette and a member of the University Academic Senate, told WPR the layoffs and reorganization have caused some anxieties but students and faculty members have been told about the need for preventative actions.

“The university is currently doing pretty well,” Chattopadhyay said. “It’s not in a crisis. But if we don’t do anything in the face of the 15 to 25 percent decline in the class size that’s going to happen because of fewer college-age students, then we would suffer some major setbacks in the future if we don’t plan ahead.”

Chattopadhyay said universities are already becoming more competitive in how they recruit students. She said other Jesuit schools and institutions in Illinois are offering financial aid incentives to students who have committed to attending Marquette in exchange for transferring.

“Even after May 1, they have tried to get our students by giving them hefty discounts or other kinds of things,” Chattopadhyay said.

In 2016, the National Association for College Admission Counseling created a code of conduct for recruiting students. It says universities should “not knowingly offer financial aid packages to students committed to attend other institutions, unless the students initiate such inquiries.”

Grawe said that many private institutions have increased the amount of financial aid incentives to remain competitive among their peers.

“Just recently we crossed the 50 percent line so that, on average, private institutions are only collecting less than 50 cents on the dollar of their sticker price,” said Grawe. “So, that means you can increase your tuition but if you’re having to simultaneously be increasing your aid and then some your net tuition revenue is flat or in some cases even declining.”

Current and projected declines in enrollment are not unique to private schools, though they stand to suffer more, said Grawe. According to Marquette President Lovell, 70 percent of the university’s revenue comes from tuition.

In 2017, University of Wisconsin System President Ray Cross announced a plan to merge the state’s two-year colleges with its four-year universities to address declining enrollment. The restructuring plan also eliminated UW-Colleges and Extension and moved its services including WPR to other places within the system. At the time, system administrators said enrollment at some of the two-year campuses had declined by 32 percent.