Biden won state with less than a majority, the 14th such result for Wisconsin, the nation’s leader. 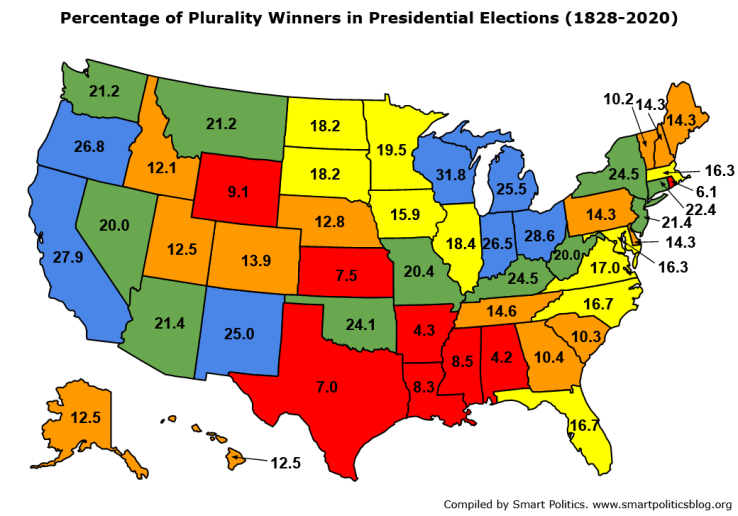 Wisconsin may not quite have the resume as the nation’s all-time presidential bellwether, but it does lead the country by one competitive measure.

With a presidential nominee scoring a plurality win in the state for the sixth time in eight cycles, Wisconsin maintains the country’s highest rate of backing plurality winners in U.S. presidential election history.

Wisconsin has now cast its Electoral College votes for a plurality winner in 14 of 44 cycles since statehood, or 31.8 percent of the time.

The remaining eight plurality winning nominees in Wisconsin are:

Clinton’s 1996 showing is the only plurality win in the state by a sitting president.

Wisconsin is one of four states with a plurality winner in the 2020 election.

In 2016, with a much stronger third party footprint on the electorate, 14 states did not see a nominee win a majority of the vote: Arizona, Colorado, Florida, Maine, Michigan, Minnesota, Nevada, New Hampshire, New Mexico, North Carolina, Pennsylvania, Utah, Virginia, and Wisconsin.

One thought on “Smart Politics: Wisconsin Is America’s Plurality King”