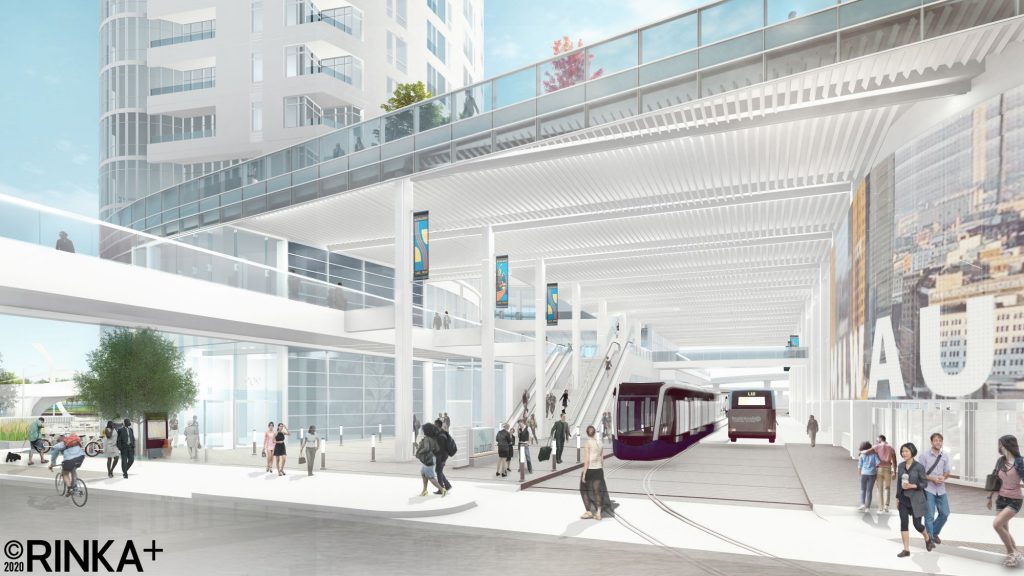 Milwaukee’s tallest and most expensive apartment building ever, the 44-story The Couture is scheduled for a groundbreaking by February 1st and completion of construction by August 2023.

That’s according to Department of City Development representative Lori Lutzka and details in a new contract, set to be signed by the city and Barrett Lo Visionary Development.

Lutzka presented a revised city funding agreement to the Common Council’s Zoning, Neighborhoods & Development Committee on Tuesday morning. Without asking any questions, the committee unanimously endorsed the proposal. The full council is scheduled to consider the proposal on December 15th.

The development, located at 909 E. Michigan St., will include more than 300 high-end apartments, approximately 900 parking stalls, 50,000 square feet of commercial space and a public transit concourse for The Hop and East-West bus rapid transit line in its base.

“This was the last approval needed to complete the capital stack and move the project towards closing and groundbreaking,” said Lutzka. The project was first proposed in 2012, but faced a number of legal and financial challenges to get to this point.

The city, through a tax incremental financing district, will provide Barrett Lo Visionary Development with $19.5 million in grants to advance the project. It approved the financial obligation in 2017.

The funds, to be repaid by future property tax revenue from the development, are largely devoted to financing the transit concourse and public amenities in the three-story base ($17.5 million in costs) and relocating a city-owned sewer that bisects the property ($1.5 million).

The funds would be provided on a reimbursement basis.

In exchange, Barrett Lo will enter into a minimum assessed value agreement with the city. The agreement is intended to ensure that the value of the property is high enough to pay back the public funds used to support its construction.

Should Barrett Lo, or a successor, not make the required payments the city would be able to levy a special assessment against the property. The city could foreclose on the building for unpaid property taxes.

Because it is accepting over $1 million in TIF funds, Barrett Lo, architecture firm RINKA and general contractor J.H. Findorff & Son Inc. will also need to meet hiring and professional services benchmarks. At least 40% of the project’s construction work hours must be completed by unemployed or underemployed city residents. At least 25% of the project’s contracts, by value, must go to certified small businesses owned by minorities or members of other disadvantaged communities.

Barrett Lo and Findorff will also need to meet a number of benchmarks to allow the city to place The Hop extension into service by June 30th, 2022.

The developer is required to deliver the space necessary for the streetcar outside of the transit concourse by April 1st, 2022. The streetcar track will loop through the building’s base, with Barrett Lo required to turn over the transit concourse by May 1st. It must provide accessible connections to the area’s public sidewalks by June 30th so the city can make its July 31st deadline to submit reimbursement requests for its $14.2 million federal grant backing the streetcar.

The city will ultimately own the transit concourse as a condominium unit. And Milwaukee County will have a lease with the city to use the space for its rapid transit line.

The Couture TIF district, which also includes the adjacent 833 East office building, will also provide up to $31 million to support the construction of The Hop. As of year-end 2019, $28.8 million has already been spent and much of the streetcar’s lakefront extension was completed. Additional expenses include TIF administration ($500,000), workforce training ($400,000), repaving a portion of N. Astor St. ($150,000) and “additional public infrastructure work” related to the project for the Department of Public Works ($500,000). The last portion was set aside in 2017 after the previously undocumented sewer was discovered.

The building’s total cost is estimated at $185 million in the financing agreement. A county report gives the cost as $188 million. It was approved in 2017 as a $122 million project. Both the city and county will enter into development agreements with the developer.

Filings with the county show the developer plans to close on a $103.5 million loan for the apartments and commercial space with JLL Capital Real Estate. A portion of the parking garage, to be set aside as a separate condominium, will be financed with a $13.9 million loan from Old National Bank.

Renderings of the project depict bridges or skywalks connecting the building to the north, east and south, including a potential new lakefront park. But none of those skywalks, or adjacent projects, are currently funded. The agreement requires Barrett Lo to enter into airspace leases for the connections if built.

The city will rebuild the intersection of N. Lincoln Memorial Dr. and E. Michigan St. as part of the Lakefront Gateway project and the building’s development. The intersections southeast of the development site were rebuilt as park of reconfiguring the freeway ramps.

As Urban Milwaukee reported in 2017, a second tower is planned for the two-acre site. The latest city agreement makes no mention of the tower, but designs filed with the city in 2017 maintained a space for the future tower’s foundation.

Barrett Lo acquired the property, and the former Downtown Transit Center, from Milwaukee County for $500,000. If a public transit use is not maintained in the property, the county would need to pay $6.7 million to the Federal Transit Administration for the removal of the former bus layover facility. 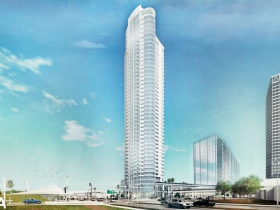 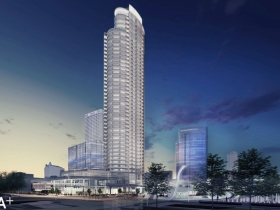 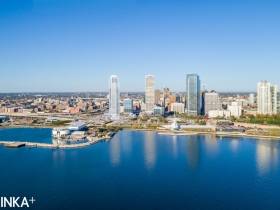 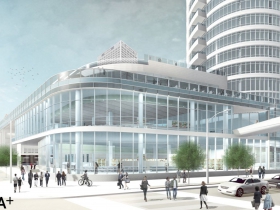 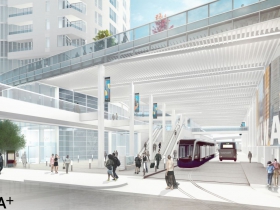 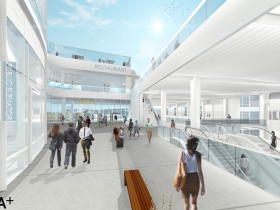