The Loveliness of Lakeshore State Park 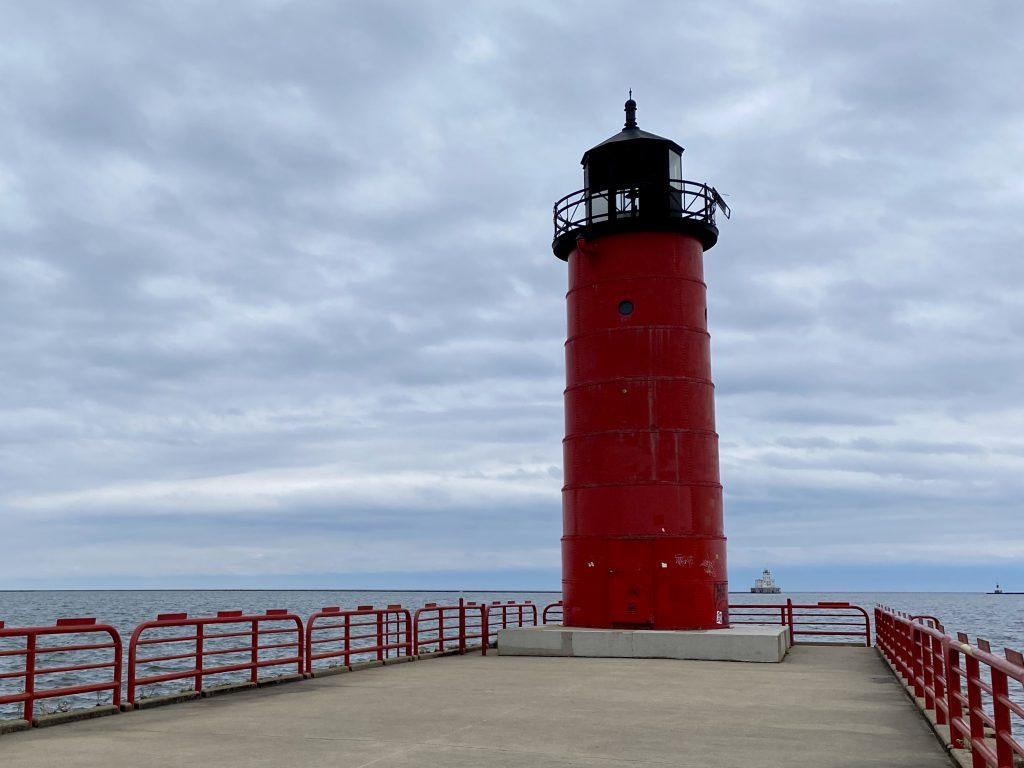 Start your walk at the lighthouse. Photo by Cari Taylor-Carlson.

Distance: 1.5 miles
Start: At the end of Erie Street in the Historic Third Ward by the red lighthouse

In 1997, in Milwaukee Walks Again, I wrote that Lakeshore State Park, then known as Harbor Island or Summerfest Island, was familiar only to fishermen who came to drop a line into Lake Michigan at the place where Erie Street dead ends. The island was dedicated for “public use and enjoyment” by Milwaukee Mayor John Norquist on October 9, 1991, and soon after, a pebble path for walkers was established around the perimeter of the island.

Thank you John Norquist! You couldn’t have known then, that 16 years later, the Wisconsin Department of Natural Resources would fund Lakeshore State Park, and instead of a rough pebble trail, a paved path would encircle the island, actually a peninsula, bringing bikers, bird watchers, dog walkers, moms with strollers, and everyone else who appreciates a paved level walkway that offers endless vistas of Milwaukee’s skyline and Lake Michigan.

This 22-acre park, Wisconsin’s only urban state park, sits on limestone bedrock removed from the deep tunnel project in the 1980s. Its history goes back much further. Once upon a time, what we know as Walker’s Point to the south, the Third Ward to the east, downtown Milwaukee to the north, and the entirety of this park, consisted of marsh, wetland and Lake Michigan.

As you enter the park from Erie Street, note the red entrance light tower constructed in 1907. This light, which can be seen by boaters as far away as 12 miles, flashes every four seconds. To the right, as you enter the park, a hillside obscures Summerfest’s biggest stage, also built on that deep tunnel limestone fill and known for years as the Marcus Amphitheater. In 2017, new sponsors renamed it American Family Amphitheater.

Inside the park, follow the paved trail. It will lead you around the perimeter, a lovely walk anytime of the year. The interior has been tastefully landscaped with undulating areas of prairie alongside open spaces covered with well-tended Kentucky bluegrass. The grass provides a monochromatic contrast to the colors of the constantly evolving prairie. For the botanically inclined, close to the beginning, you will find a display showing flowers and grasses viewed from the trail through the seasons, as “New Blooms, In Their Prime, and Season Endings.”

Along the way, a few strategically located picnic tables and benches provide respite. Not too many, as they would clutter this aesthetically designed landscape. At the north end, a pedestrian bridge leads to Discovery World and the southern fringe of Downtown. Also, at the north end of the park, several boat slips provide a haven, up to four nights, for boaters who come to Milwaukee for a brief visit.

Get a daily rundown of the top stories on Urban Milwaukee
Continue south on the path and you will come to the Fishing Pier, built on what is known as Quiet Water Basin. The Basin’s shallow water attracts many fish species making it a popular site for fishermen. If the pier is crowded, there are two other places to drop a line, the large stone blocks on the west side, and below the Pedestrian Bridge. From any of these sites, you might snare a Lake Trout, a Large Mouth Bass, or with luck, a Coho Salmon for your dinner.

Further down the path is a pebble beach, not ideal for sun bathing, but it does give kids place to dip their toes. Swimming, however, is strictly off limits; there is no lifeguard.

Everywhere you look as you traverse the island there will be a view: the rocks piled by the lake, the prairie, the graceful arc of the Hoan Bridge, the downtown skyline, the lake, and the intimate sightings of ducks, geese, and gulls, along the shore of the Quiet Water Basin. This is a walk to savor, a place to slow down where you can sit at a picnic table, rest on a bench, or sprawl on a rock by the lake on a steamy summer day. In colder weather its still a wonderful walk. Leave your timepiece in a pocket. Lose yourself. If time is of essence, look south and west to the Allen Bradley clock tower. The park is almost always cool on hot days, often windy and never boring. It’s an island of unending delights. 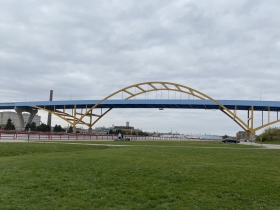 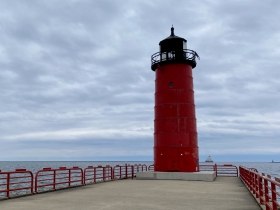 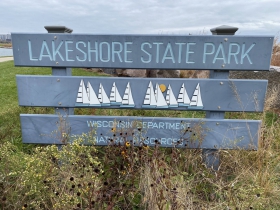 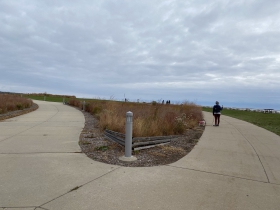 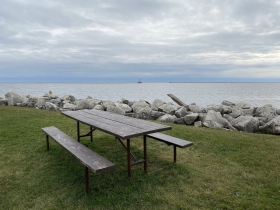 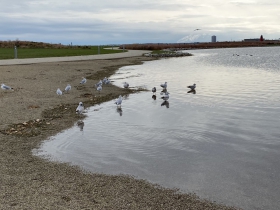 One thought on “Milwaukee Walks: The Loveliness of Lakeshore State Park”