By Isiah Holmes, Wisconsin Examiner - Nov 23rd, 2020 05:09 pm
Get a daily rundown of the top stories on Urban Milwaukee 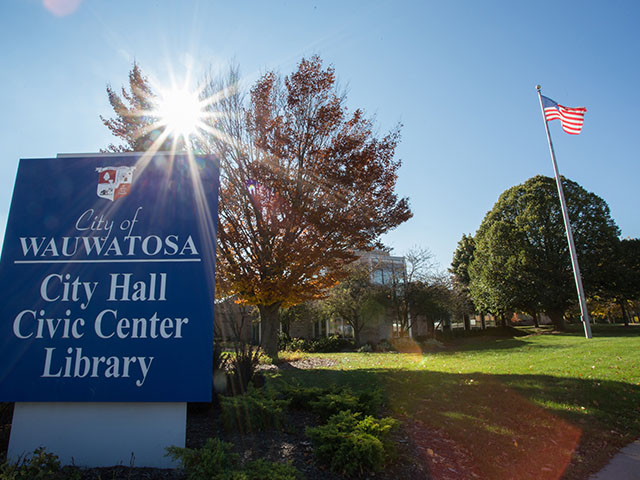 Wauwatosa City Hall. Photo from the City of Wauwatosa.

Joseph Mensah is set to resign from the Wauwatosa Police Department (WPD), but the movement of activists calling for the department to be held accountable for its policies continues to push for change. Mensah, who was involved in three fatal police shootings over the past five years, agreed to resign after finalizing a separation agreement with the city. The agreement and its conditions have become a new source of contention.

Lawyers Kimberley Motley and Deja Vishny issued a letter to Wauwatosa Common Council members, City Attorney Alan Kesner, Police and Fire Commission (PFC) president Dominic Leone, and others on Nov. 18 outlining the “strong objections” they have to the agreement. Motley and Vishny have represented the families of those Mensah has killed, including 17-year-old Alvin Cole. The Motley Legal firm also filed complaints against Mensah on behalf of the families of 25-year-old Jay Anderson, Jr. and 28-year-old Antonio Gonzales.

According to Wauwatosa’s city government website, because Mensah will no longer be a city employee, any complaints filed against him will be dropped. Mayor Dennis McBride said in a statement, “Now is the time for all of us to come together and heal. We’ve made substantial progress during 2020, and in the coming year we’ll continue to focus on positive change for our community.”

In a press statement on Nov. 19, Motley Legal asserts that the Common Council failed to give proper public notice, nor did it inform Motley’s clients of the resolution which was approved on Nov. 17 regarding Mensah’s resignation. The lawyers state that this constitutes a violation under Wisconsin’s open records law. McBride pushed back against the assertions in a statement to Wisconsin Examiner.

“As required by the statute,” the mayor said, “the agenda was published more than 24 hours in advance and ‘set forth the time, date, place and subject matter of the meeting, including that intended for consideration at any contemplated closed session in such form as [was] reasonably likely to apprise members of the public and the news media thereof.’” McBride adds that one of the agenda items mentioning discussion involving litigation related to WPD was the same language used in the council’s agenda of July. 14 and Oct. 20 of this year.

“The City received no objection from attorney Motley or anyone else regarding the agenda notices given for those meetings,” McBride wrote in an email. “Attorney Motley and her clients were not parties to that relationship, nor were they parties to potential litigation between Officer Mensah and the City. The Council discussions on July 14th, October 20th, and November 17th were in closed session because they dealt with ‘potential litigation and associated litigation strategies.’ Under the Open Meetings Law, members of the public, including attorney Motley, had no legal right to participate in such confidential discussions.” McBride, a lawyer in his own right, cites Wis. Stat. 19.85 (1) (g) to back up his argument.

In a separate press statement, Motley Legal states that the language of the agenda item referenced by McBride is “intentionally vague.” Further, the lawyers object to the dropping of the complaints filed against Mensah on behalf of the Gonzales and Anderson families.

“Joseph Mensah should be terminated from the Wauwatosa Police Department,” reads the Nov. 18 press release. “The hearing against Mensah began with the acceptance of charges against him on July 15, 2020. Since that time both sides have argued on the record, given pleadings, and offered written evidence to the PFC in this case.”

Motley Legal also mentions the independent investigation, which found that Mensah should have been fired. The lawyers also highlight a “side agreement” signed on Nov. 16, stating the separation agreement’s contingency “rescinding Officer Mensah’s suspension and dismissing any pending charges, including citizen complaints against Officer Mensah.” In their Nov. 18 press release Motley Legal stated, “this implies that the PFC has been in negotiations with Mensah without the knowledge of the complainants.”

WPD released a statement on Mensah’s resignation on Nov. 20. “As part of the agreement,” it read, “any pending cases with the Wauwatosa Police and Fire Commission were dismissed and his suspension was lifted. Officer Mensah’s resignation will be effective Nov. 30, 2020, and he will resign in good standing with the Wauwatosa Police Department. Officer Mensah has been a member of this department for the past five years and will be missed. We wish him the best in his future endeavors.”

The department adds that, despite the challenges it experienced in 2020, “our commitment to serve and protect the citizens of Wauwatosa has not wavered and we will continue to do so with the same dedication and professionalism that is expected of us.”

Since the protests over the killing of George Floyd by a Minneapolis police officer, which sprang into Milwaukee’s streets over a summer weekend in May and then made their way to Wauwatosa, policy changes have occurred involving Tosa police. The city has moved to implement a body camera program for all officers, something it had been unable to achieve in recent  years. A ban on chokeholds passed, as well as a prohibition on city officials requesting the execution of no-knock search warrants.

Both the the city’s Equity and Inclusion Commission (EIC) and an ad hoc committee on policing and other systemic issues were established in 2020. The city has made other future commitments to reform and inclusive policies, involving not just the police but the Wauwatosa government.

These advances, however, have been made despite resistance from WPD and the Wauwatosa Peace Officers Association (WPOA), which is essentially the police union. First came Chief Barry Weber’s comments condemning Sean Lowe, chairman of the EIC, for speaking out against Mensah and WPD during a public listening session on racial issues during the summer.

Then came the WPOA’s call to remove John Larry, who chairs the ad hoc committee, from his position and to disband the committee altogether. Marchers, many of whom regularly attend protests organized by a group called The People’s Revolution (TPR), held a protest outside Mensah’s home chanting, playing loud music, and speaking over loudspeakers. One of the protesters fired a gun. Witnesses at the scene, including Rep. David Bowen, disagreed about who was responsible for the escalation.

Shortly after the incident, Mensah took to Facebook stating that he and his girlfriend had been shot at multiple times. But the WPD, which is investigating the incident, stated that a single shot was fired. Weber accused Bowen and other witnesses of spreading inaccuracies on Aug. 11 during a radio interview on the Mark Belling Show. Mensah moved from his home after the incident, and three individuals were arrested. WPD confronted protesters every night for the following week, culminating in a standoff on Aug. 14 triggered by the arrest of a marcher.

“I think it’s important to note that [regardless of] any behavior outside the meetings, in terms of the meetings themselves, Mr. Larry has done a perfectly fine job as chair and has not brought in any of his personal opinions in an attempt to skew the behavior of the committee,” said Welch during the meeting. “What does concern me is the lack of cooperation from the police department and from the police union,” she continued. “This concerns me greatly because this is a council-created committee and we have a police department that’s basically saying they won’t cooperate with a committee created by the common council. I have a problem with that.”

WPOA president John Milotzky has noted the union’s lack of interest in working with ad hoc committee members who are affiliated with the protesters. Although Weber has a seat on the EIC, his attendance rate had been low. Nevertheless, Weber accused Welch of lying about the department’s patterns with the ad hoc committee. “That’s not true,” the chief shot back as soon as Welch finished her sentence. Welch requested that Weber not interrupt her during the meeting, yet he continued. “And don’t lie,” said Weber, drawing an angry response from the alderwoman.

“This is another example of the problem we have here,” said Welch. “We have a police department that thinks they can operate outside of a process that’s been established to have a reasonable conversation about what needs to happen. Not only that, but we have a police union that simply goes and attacks any member of that committee that has been put there that expresses an opinion that is contrary to the police department.” Speaking directly to Chief Weber Welch said: “Don’t cut me off and don’t correct me. Because you have not cooperated, and for no reason that I can understand.”

Welch told Wisconsin Examiner, “I thought their behavior was unprofessional and inappropriate, and displays a certain resistance to move forward in a collaborative matter to enact some very important police reform measures, like the body cameras.”

Protests in Wauwatosa continue. During the evening hours of Nov. 19, TPR held a small protest outside McBride’s home. Dozens of protests have occurred near the mayor’s house, as well as at the home of the president of the PFC who lives on the same block. WPD officers responded to the protest, monitoring the event and forming a perimeter around McBride’s home. No arrests were made. More protests are planned in the days to come.