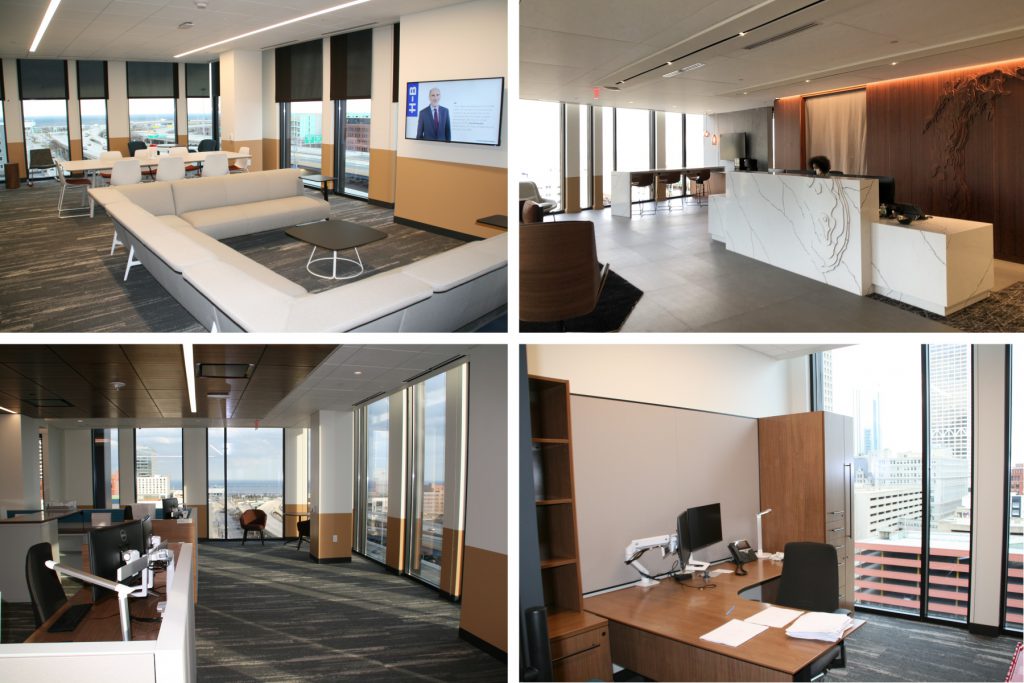 Husch Blackwell has relocated to new offices atop the Huron Building. The law firm and its 153 Milwaukee-based employees occupy 76,811 square feet of space on the 11-story building’s top three floors.

Developer Joshua Jeffers showed off much of the new building in early October, but the building’s anchor tenant wasn’t ready. Now the firm is showing off its new space at 511 N. Broadway.

When the firm it announced in 2018 it would relocate to the new building from its offices at Cathedral Place, it praised the ground-up design and its focus on “me” and “we” spaces. The final results bear that out with an aesthetic based on metal, wood and water.

Each of the 85 attorneys has a private office, each the same size, approximately 150 square feet, designed to encourage all interaction to take place in shared spaces. Nearby paralegals and administrative employees can be found in pods with low cubicle walls facing floor-to-ceiling windows. Haworth brand furniture is used throughout, including adjustable standing desks.

Almost every employee has a space awash in natural light, including the receptionist in the 11th-floor lobby. The lobby has a floor-to-ceiling, three-dimensional depth map of Lake Michigan that greets visitors.

Glass walls can be found everywhere, said to have sound dampening capabilities greater than a single layer of drywall. The sliding glass doors also have an automatic slow-closing feature. No slamming doors shut.

There is a dizzying array of shared spaces. Interspersed throughout the office are small meeting spaces that can’t be reserved, encouraging spontaneous meetings.

A series of meeting rooms set up in a client-accessible area offer high-end video conferencing alongside large conference tables on the 11th floor; a quiet-space library (50% of the size of the firm’s former library) can be found on the 10th floor; and a large multipurpose room with a capacity of up to 88 seated is on the ninth floor.

Get a daily rundown of the top stories on Urban Milwaukee
The ninth floor also includes a lounge overlooking the Historic Third Ward and a cafe with a wide variety of seating options, including a countertop lining the window with lake views (and a Coca-Cola Freestyle machine to provide over 100 soda options for that afternoon pickup).

And that’s just what’s inside. Each floor also features an open-air deck with skyline views. If those aren’t big enough for a particular gathering, the larger 8th floor deck, a shared amenity for all building tenants, can be rented.

“Every inch of this office space was designed with our employees in mind,” said Husch Blackwell’s Milwaukee office managing partner Jack Enea in an interview. The firm has 18 locations in nine states. It’s official headquarters is in Kansas City, but firm CEO Paul Eberle is based in Milwaukee.

A series of windowless spaces fill the inside of each floor, including wellness suites for nursing mothers (or others wanting an isolation space), a mailroom and a secured vault for sensitive client records. A fitness center is available for all building tenants on the shared 8th floor.

The pandemic will have an impact on how the firm uses its office going forward. Currently, no more than 30% of employees can report in-person on a given day, but only 18 to 20 people total, far short of the limit, are in the office daily said Enea.

“We do believe there will be some percentage of our folks that will continue to work from home, probably on a contingent basis,” he said.

The firm previously leased multiple floors of the Cathedral Place office tower, a portion of which has already been snatched up by Johnson Bank. The new building affords direct freeway access to Interstate 794, a single elevator ride from parking garage to office space, floor-to-ceiling windows and the ability to design a new space from scratch.

There may still be some future changes. “We are going to continue to look to grow,” said Enea. More offices could be constructed in an area filled by cubicles and the firm could ultimately lease more space in the building. Currently, it’s the only office tenant in the building.

What more could Husch Blackwell want in the location? Enea ticks off a list of current amenities: lakefront, ingress, egress, Downtown, Historic Third Ward. “You’ve stumped me,” he concludes.

For more on the Huron Building, see our coverage from October. 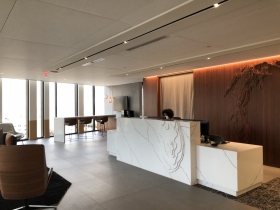 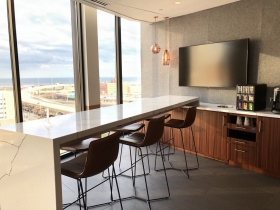 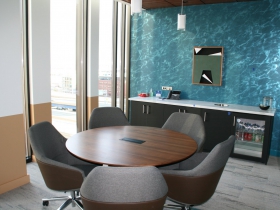 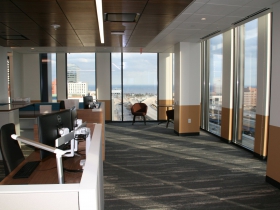 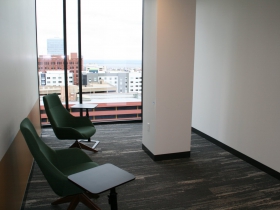 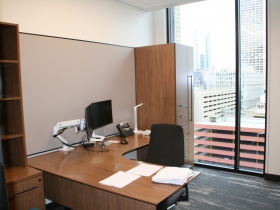