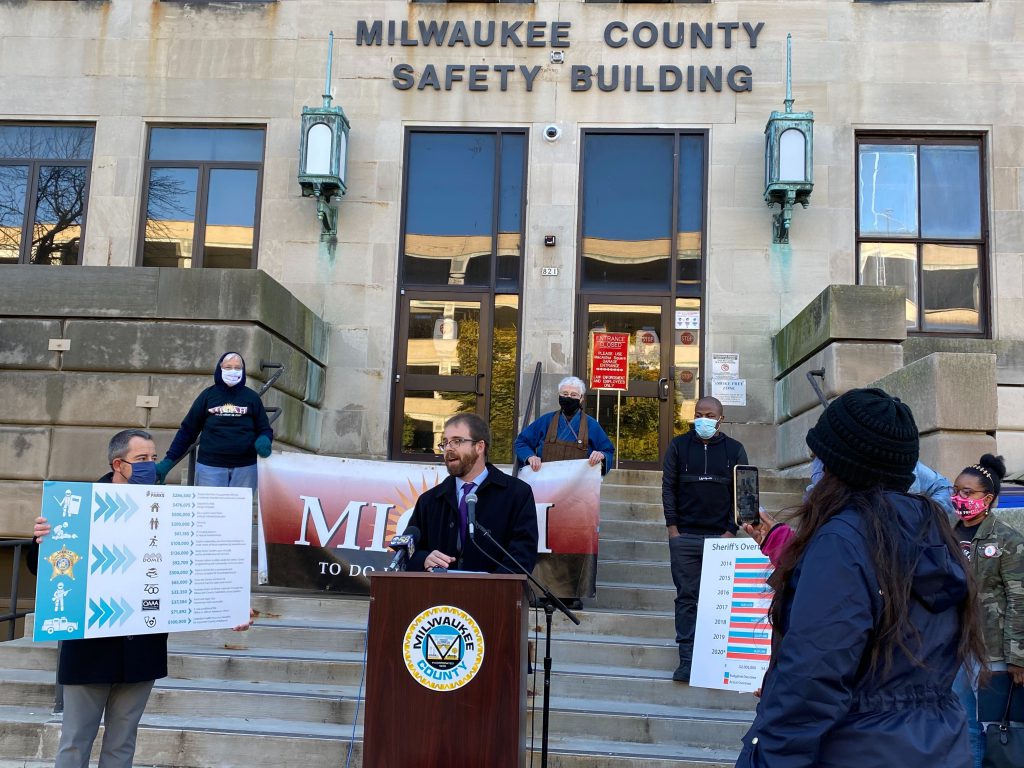 Milwaukee County Supervisor Ryan Clancy announced $2.6 million worth of budget amendments Wednesday that would take money from the overtime budget of the Sheriff’s Office and put it into other county services.

At a press conference in front of the Milwaukee County Safety Building, Clancy and a handful of community activists and organizers made the case for shifting funding away from overtime for sheriff’s deputies into parks, housing, senior services, and programming for youth at the county-run justice facility among other things.

For at least the past seven years, the sheriff’s office exceeded its budget for overtime on an annual basis. Between 2014 and 2020 the department spent $36.3 million more in overtime than the budgeted amount of $25.5 million for those seven years, for a total of $61.6 million spent on overtime, Urban Milwaukee previously reported. On average, the department exceeds its budget by $5.2 million annually.

Sheriff Earnell Lucas was elected in 2018, so the overspending is an issue that predated and has continued under his administration.

“The budget process doesn’t make any sense if they can literally ignore it,” Clancy told Urban Milwaukee. Along with the proposed cut, Clancy suggested that if it looks like the Sheriff’s Office “is on track to grossly exceed their overtime allocations, we pull them in front of the judiciary committee and in front of finance and make them accountable, make them answer to us for that.”

As a constitutional officer, the Sheriff’s Office has certain duties mandated by the state. These include securing and staffing the county jail, patrolling the expressways, court security and servicing civil processing — including evictions and subpoenas. Lucas and his Chief of Staff Ted Chisholm have both said the office relies heavily on overtime to perform the office’s core functions.

“[The Sheriff’s Office] pointed to the state mandate as proof that their budget is untouchable,” Clancy said. “And the Board of Supervisors has complied with that interpretation, doing very little to rein in spending that we deny to other departments.”

He noted that a number of the sheriff’s functions have been reduced this year as many operations and public activities were pared down in response to the pandemic. Clancy has told Urban Milwaukee he thinks overtime spending by the office is not out of necessity, but out of expectation. “If we gave them twice as many deputies, I’m certain we’d see twice as much overtime,” he said.

Clancy has repeatedly pressed the Sheriff’s Office on their response to protests. He noted that between May and August, it clocked more than 16,000 hours of overtime responding to protests, costing more than $1 million.

As of Oct. 12, Clancy said, the sheriff’s office has clocked approximately 60,000 fewer overtime hours in 2020, compared to 2019. These hours are equivalent to approximately $2.6 million. Which is what Clancy’s amendments would spend.

Of his 15 amendments, some notable examples are: $200,000 for flexible funding to reduce obstacles to housing, $476,075 to expand the park ranger program, $500,000 for a commercial kitchen and community-led culinary program for incarcerated youth at the Vel R. Phillips Juvenile Justice Center, $33,350 to increase access to library materials through the Milwaukee County Federated Library System, $61,185 for a housing position to reduce homelessness, $100,000 to explore expanding the use of existing buildings to meet the needs of individuals and families experiencing homelessness and a combined $228,000 to keep senior centers open virtually, providing essential services and providing tablets to seniors.

None of Clancy’s amendments would eliminate positions within the Sheriff’s Office. “We’re talking about getting rid of excessive, wasteful overtime for the sort of over policing that the county has said we don’t want and is not appropriate.”

Both Clancy and the narrative of County Executive David Crowley’s proposed 2021 budget have noted that approximately 60% of residents that used the county’s Balancing Act Tool, which allows citizens to tinker with the budget, reduced funding for the sheriff’s office to pay for other county services.

Rick Banks, political director and organizer with Black Leaders Organizing Communities, said “The Milwaukee County Sheriff’s Department is not immune from calls to divest from law enforcement and incarceration and policing.”

Given the pandemic, and the crisis it has created for many families facing eviction and “struggling to afford basic necessities,” Banks added, the services marked for investment in Clancy’s amendments should be supported.

Barbara Robinson, of Milwaukee Inner-City Congregations Allied for Hope, said the kitchen at the youth detention facility would allow the children there to eat hot meals, as opposed to the pre-packaged cold-meals she said they’re currently getting. And, she added, the children could learn cooking and other culinary skills that could help them get a job in the future.

Tonen O’Connor, with criminal justice advocacy organization WISDOM and the Buddhist Peace Fellowship of Milwaukee said she has seen “the total waste of lives,” in corrections institutions. “Anything that we can do to keep our young people off the track that would take them to those institutions we must do,” she said. “I think this proposal offers respect. It offers possible skills training. And it should be supported.”

Devin Anderson with the African-American Roundtable and Liberate MKE, said Clancy’s amendments are a “start to this conversation” surrounding law enforcement budgets and spending on social services. “Our communities deserve real investments into programs that actually improve their quality of life and not lock them up,” he said.

More about the 2021 Milwaukee County Budget