That's $35 million more than budgeted over the last seven years. 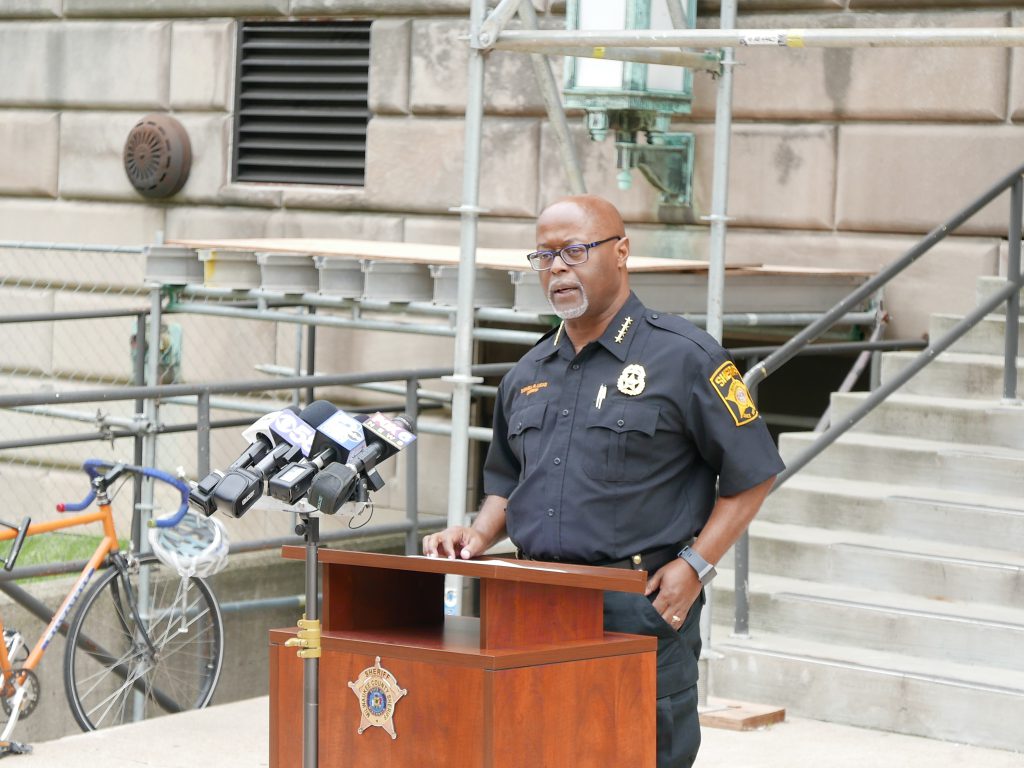 Year after year, the Milwaukee County Sheriff’s Office has blown past the limits on its annual budget, overspending by millions on overtime.

According to figures from the sheriff’s office, between 2014 and 2020 the department spent $36.3 million more in overtime than the budgeted amount of $25.5 million for those seven years, for a total of $61.6 million spent on overtime. On average, the department has exceeded its overtime budget by $5.2 million annually. The lowest it’s gone was $3.4 million over budget in 2014 and the highest was $8.1 million over budget in 2017.

The sheriff’s office is a constitutional office in Milwaukee County, and some of its duties are mandated by state law. And failure to perform them, Sheriff Earnell Lucas has warned, could result in his arrest.

But former Milwaukee County Executive Chris Abele pushed plans to reduce the duties of the Sheriff’s Office, for instance by having police from Milwaukee and surrounding suburbs patrol the parks. However, then-Sheriff David Clarke fought this and the county board voted against the proposal. Also under Abele the Sheriff was removed from administering the House of Correction.

And Sup. Ryan Clancy, who won a seat on the board in the Spring 2020 election, argues that the Deputy Sheriffs needn’t get involved in policing protests, given that there are local police handling this.

The sheriff’s primary duties include patrolling the expressways, county highways and parks and staffing the county jail and providing security at the courthouse. The Sheriff’s office has also worked with other law enforcement groups on the High Intensity Drug Trafficking task force. To do all this, Lucas recently told the county board’s Finance Committee, “We have been forced to rely heavily on overtime.”

Clancy isn’t satisfied. “The budget process doesn’t make any sense if they can literally ignore it,” he said.

Lucas and his chief of staff, Ted Chisholm, told the board his office worked with County Executive David Crowley’s office and the office of Performance Strategy and Budget both on their request and the county executive’s proposed budget.

Crowley’s proposed reduces the Sheriff’s budget by 2.7% or $1.3 million and includes a reduction in budgeted overtime from the Sheriff’s request, by more than $200,000, Chisholm told the committee.

But overtime figures show the sheriff’s office has already exceeded budgeted overtime in 2020 by approximately $4.5 million. So, Clancy pointed out, when the sheriff submitted his request, he already knew he had blown clear past the current year’s overtime budget.

So why doesn’t the Sheriff submit a realistic budget request to the county executive and the board? Clancy asks. It “reflects that they’re intending to keep doing what they’re doing,” and continue overrunning the overtime budget.

“I’m questioning what the point of a budget is,” Clancy said, if the sheriff can ignore it year after year.

Clancy told Urban Milwaukee he’s drafted 15 amendments, most of which take aim at the Sheriff’s overtime and transfer the funds to other county functions like parks, housing or the Office of African American Affairs.

“I know that the residents of Milwaukee County are with me,” Clancy said, pointing to the results from the county’s Balancing Act tool, which allows citizens to tinker with the budget, trying to balance it and showing what their priorities are. About 60% of county residents that used balancing act reduced funding for the sheriff’s office.

Is it really possible to cut the overtime budget if the department already overspends the budget every year? Clancy said he wants the board to hold the office to better accountability of its overtime spending throughout the year. He even has plans for an accountability measure which he will introduce as a budget amendment.

Clancy told Urban Milwaukee he would like to know where the sheriff has been spending all this overtime. He noted that because of the pandemic, the courthouse has been largely empty for most of the year, so it shouldn’t be there. He’s skeptical of the message from the sheriff’s office that the current rate of overtime spending is critical to the day-to-day operations of the department. And he doesn’t think funding more deputies for the office would necessarily cut overtime. “If we gave them twice as many deputies, I’m certain we’d see twice as much overtime,” he said.

Clancy has also pressed the sheriff’s office on its response to protests this summer. The office logged nearly 17,000 hours of overtime during the protests. And based upon deputy rates of pay, Clancy’s back-of-the-envelope calculation shows the department spent well over $1 million just on overtime pay during the protests.

Clancy argued that much of this was unnecessary: “The Sheriff absolutely does not have the mandate to send deputies in riot gear to counter peaceful protesters.”

But Lucas and Chisholm have said that deputies were deployed because it is the chief law enforcement agency in the county and state statute directs it to keep and preserve the peace, and they were  needed to secure county infrastructure and facilities as well as ensure the safety of all persons including protesters. Clancy, however, contends that police departments can handle this. Abele, in pushing for past budget cuts, made a similar argument, that general policing by the Sheriff’s Deputies rarely happened and wasn’t needed in a fully incorporated county where local police departments serve every part of Milwaukee.