The “Molotov Cocktail” That Wasn’t

MPD admits the 6th and McKinley weapon was just a plastic water bottle. 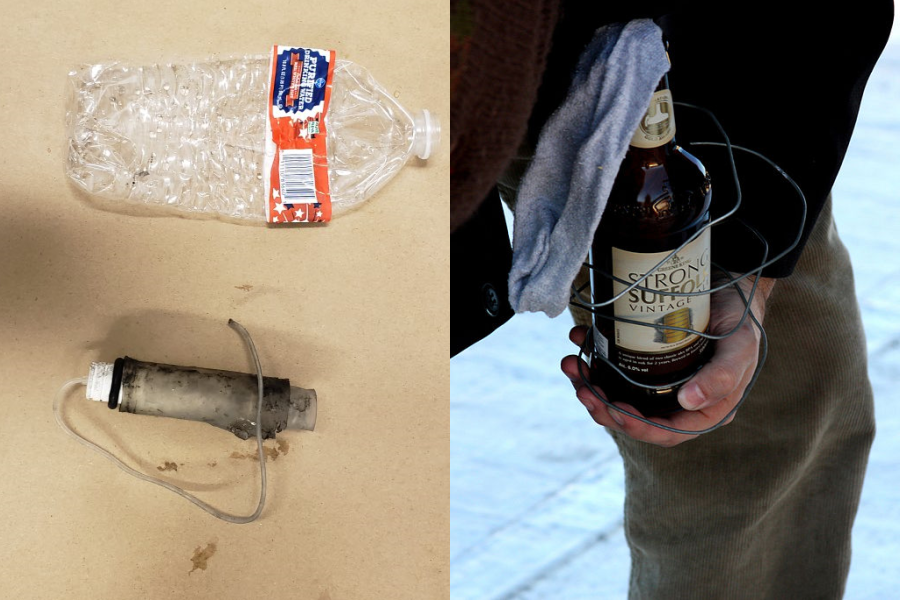 The altercation ultimately became the subject of a council hearing and later was one of the items listed in a series of directives that ultimately led to the demotion of then-Chief Alfonso Morales.

A Molotov cocktail has three key ingredients: a container that breaks upon impact (often a glass bottle), flammable liquid and a wick. When the lit device hits a target it shatters, creating a fireball.

MPD produced a photo of a plastic water bottle and another object at 1:11 a.m. the next morning after announcing that multiple cocktails were thrown in a 9:16 p.m. tweet.

On June 6th then-Assistant Chief Michael Brunson, promoted to Acting Chief after Morales was demoted in August, told the Common Council the department transferred the recovered device to a Bureau of Alcohol, Tobacco, Firearms and Explosives (ATF) laboratory for review.

Now the department admitted it never was a Molotov cocktail and it never went to a crime lab. It was a plastic water bottle and a fish tank pump.

The revelation comes from dogged reporting from the Milwaukee Journal Sentinel’s Ashley Luthern.

As multiple media outlets on the scene of the altercation captured, there were a handful of water bottles thrown at riot-gear-clad police officers before the police returned fire. But, as Urban Milwaukee previously reported from a review of multiple video angles and interviews of many at the scene, none of those videos show a lit object coming towards the phalanx of officers.

Get a daily rundown of the top stories on Urban Milwaukee
Even before the department announced it wasn’t a flammable weapon, the department’s response at 6th and McKinley engendered criticism from many racial justice protest participants, including Representative Jonathan Brostoff.

The provided timeline and amount of force used also drew criticism from the Common Council.

Via a tweet, MPD said the “Molotov cocktail” was thrown at 8:08 p.m. But multiple videos and on-the-ground reporting by Urban Milwaukee’s Graham Kilmer, confirm things had escalated at least a half hour prior.

“I think the time frame just doesn’t match that justification,” said Alderman Nik Kovac on June 6th. He called the supposed Molotov cocktail a “specious justification” for the amount of force used. “The response was inappropriate and extremely disproportionate.”

Brunson gave the order for the use of force at 6th and McKinley. He said, in a video produced by MPD for Morales, that rocks and asphalt were also thrown at officers.

“At 6th and McKinley, that was quite a warm day,” said Ald. Scott Spiker. “I don’t think that’s quite the concern on that day.”

“The bottom line is citizens should not throw objects at the police. Period,” said Brunson. “Obviously,” responded Spiker. But he continued to ask if there is a middle ground that could remove the provocateurs without using force on the other marchers.

Alderwoman Chantia Lewis raised issues with bicycle officer conduct at 6th and McKinley, notably one placing a knee on someone’s neck. That individual, Cameron Murdoch, is now pursuing a claim against the city for $500,000 for injuries sustained when he was allegedly wrongfully detained.

There have been Molotov cocktails used in Milwaukee in the past. Tyshaun T. Smith faces federal charges for throwing a Molotov cocktail at a Boost Mobile store on June 4th. Charging documents say an officer watched him throw the device and had gasoline on his sweatshirt and gloves. A fire was put out and a device was recovered.

Morales said that many criminals took advantage of the protest movement to commit vandalism and loot businesses across the city. “Those are our local problem people, if there was no reason to loot and riot they would still be involved in criminal activity,” he said in a June 2nd interview just before the 6th and McKinley altercation. Businesses away from any marches were targeted, including a number of cell phone stores, a Home Depot in Bay View and other convenience stores.