Study finds new buildings aren't the cause of gentrification and instead limit its effects. 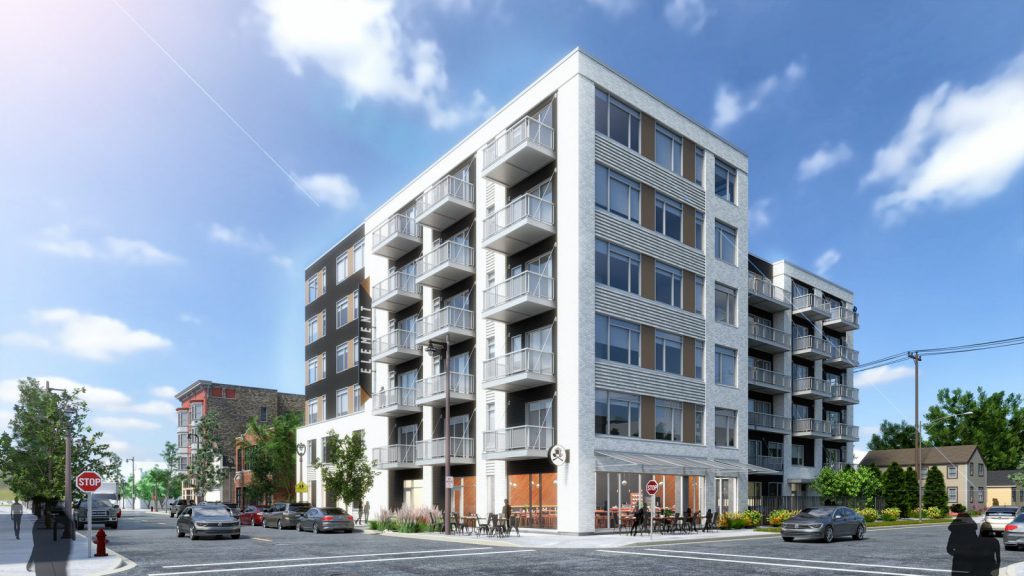 New apartment buildings in low-income neighborhoods are often thought to be the cause of gentrification, driving up rents and displacing residents. But new research shows that instead new buildings lower rents in surrounding buildings by five to seven percent.

In a working paper and policy brief, Evan Mast and Brian Asquith of the Upjohn Institute and Davin Reed of the Philadelphia Federal Reserve Bank explore the impact of new, market-rate apartment buildings with more than 50 units in neighborhoods with a median income below that of the metropolitan area.

The authors report that demographic data shows a new building is not the catalyst for change. “Instead, its primary effect appears to be to accommodate preexisting demand, diverting high-income households from nearby units and reducing rents,” they write.

The decreasing rent effect appears to have an impact on who is drawn to the neighborhood. Their research found that new buildings increased the number of people that move to a neighborhood from even lower-income neighborhoods by three percent.

The study involved looking at buildings completed in 2015 or 2016 and rents on buildings, located within two blocks, in the years prior and after. Buildings needed to have no other building completed within 250 meters since 2010. A control group was also used in each city.

The authors also explored a potential doughnut effect, where nearby rents were reduced but those a few blocks further away were increased, and found no supporting evidence.

It’s unclear how their research directly applies to Milwaukee, something the authors warn about. “First, our findings are specific to the large market-rate apartments and strong market cities that we study, and effects could differ for other types of housing or other areas if amenity effects depend on local  context,” they write. They also express caution about long-term impacts, but provide some evidence that the reduction is sustained.

Their research does not apply to buildings supported by low-income housing tax credits, the type of multi-unit development that is most often built in Milwaukee’s lowest-income neighborhoods. Nor does it apply to buildings that include senior housing, assisted living units or are constructed in census tracts with more than 25 percent college students.

The authors do suggest how city leaders can take advantage of the impact they observed – make sure zoning and land-use regulations allow for large enough buildings to be built. “Policymakers should keep in mind that the particulars of those changes could affect where housing is built—for example, in vacant lots or through demolition of existing affordable housing,” they write.

The study has not been peer reviewed or published in an academic journal.

A new apartment building is quickly taking shape in the Historic Third Ward.

Joseph Property Development is developing a 60-unit building at the southwest corner of N. Jefferson Street and E. St. Paul Avenue. The site was most recently a surface parking lot.

The Historic Third Ward Architectural Review Board first approved the project in 2018, but Joseph had to wait for over a year as a unique feature was built in the center of the site – an electrical substation for We Energies.

A new apartment complex will take shape in a 96-year-old office building in the heart of Downtown.

“Our concept is to keep the rents relatively small and attainable,” said Dincin in an interview.

Much of the building will be studios starting at $1,100. But the building’s top two floors will feature larger, two-story units. “The views are surprising,” said Dincin, noting you can see the lake and much of the skyline.

It wasn’t quite a groundbreaking, nor was it a ribbon cutting, but Thursday’s ceremony to mark the construction of a new high school for the Hmong American Peace Academy charter school had all the hallmarks of 2020 – social distancing, face masks and hope for a better future.

School founder and executive director Chris Her-Xiong shared her story of fleeing Laos at the age of 10 and coming to America. She went on to found the Hmong American Peace Academy in 2004, which began with 200 students and now has 1,800.

“HAPA is a reality because of all the hard work and planning of so many people,” she told the couple dozen people in attendance.

“We are building a community of leaders and lifelong learners,” said Her-Xiong, noting that 95 percent of the student body lives in poverty.

The proliferation of murals in Milwaukee has created a new challenge – what to do when the building itself is treated as art?

The city’s Historic Preservation Commission adopted a set of guidelines Wednesday afternoon intended to provide a framework for how and when a mural could be applied to a building the city has designated as historic.

The lack of such a framework became an issue in October 2019 when it was discovered that a mural had been painted directly on a protected building on W. Historic Mitchell St.

The modification was made without the necessary Certificate of Appropriateness from the commission, but even if the commission wanted to grant one it had no guidelines for how to do so. Plenty of guidelines exist for everything from replacement railings to windows, but nothing for murals.

New Hotel for 124th and Bradley

State-owned land along Interstate 41 could be developed into a hotel on Milwaukee’s far northwest side.

An approximately 2.89-acre site bounded by W. Bradley Rd., Interstate 94, W. Park Pl. and N. 124th St. was deemed surplus land by the Wisconsin Department of Transportation and listed for sale for $647,200, its appraised value.

The price was cut to $399,900 and now a WisDOT spokesperson confirms a sale is pending.

One thought on “Plats and Parcels: New Apartment Buildings Lower Nearby Rents”