Cop Says He Thought Jacob Blake Was a Kidnapper

Attorney for Kenosha cop who shot Blake offers this defense to the media.

By Megan Hart, Wisconsin Public Radio - Sep 27th, 2020 01:25 pm
Get a daily rundown of the top stories on Urban Milwaukee 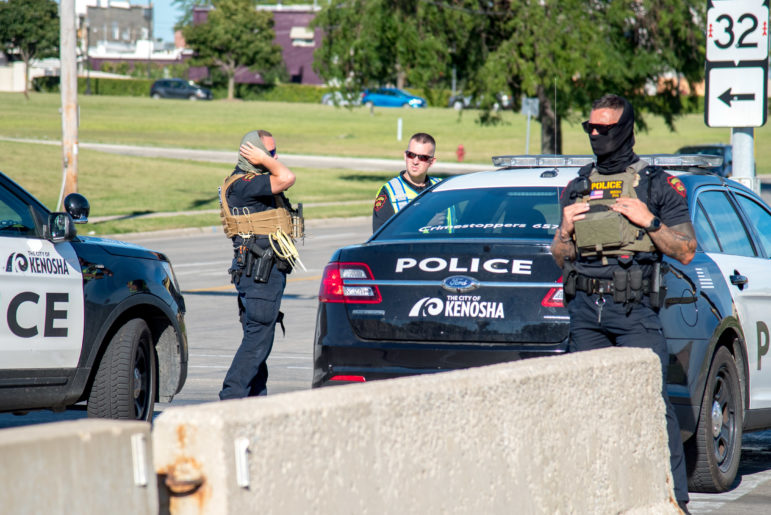 Police officers are seen near a rally in Kenosha calling for justice for Jacob Blake. Photo by Will Cioci / Wisconsin Watch.

The lawyer for Kenosha police officer Rusten Sheskey said his client used deadly force against Jacob Blake because he believed Blake was attempting to kidnap a child.

In an interview Friday with CNN, attorney Brendan Matthews said Sheskey heard a woman say, “He’s got my kid. He’s got my keys,” before he fired multiple times into Blake’s back. Blake, a 29-year-old Black man, was leaning into his SUV with his children in the backseat when Sheskey shot him on Aug. 23. Blake is now paralyzed, according to his family.

Matthews said Blake was holding a knife at the time of the shooting, a claim that’s been disputed by Blake’s family and his legal team. Matthews represents another police officer who was at the scene, who said Blake was turning toward them with a knife in hand when Sheskey pulled the trigger, Matthews told CNN.

In a widely circulated video of the shooting, it’s unclear if this occurred since Blake’s body is blocked by a car door. The witness who shot the video said he heard officers telling Blake to drop the knife, but he didn’t see a knife in Blake’s hand, he told CNN. Investigators found a knife on the floorboard of Blake’s vehicle.

Matthews, who also represents the Kenosha Professional Police Organization, doesn’t typically talk about ongoing cases, he told CNN, but in this instance, he felt it was important to counter the “incomplete, inaccurate” reports that have emerged so far.

But Blake’s uncle, Justin Blake, said Matthews’ assertions are false, according to the Kenosha News.

Last week, the Wisconsin Department of Justice said it plans to share the results of its investigation into the shooting with retired Madison Police Chief Noble Wray, who is expected to provide insight to local prosecutors on whether the shooting was justified or if criminal charges should be filed.

On the day of the shooting, officers were called to the scene at the 2800 block of 40th Street in Kenosha over a domestic issue. Blake’s girlfriend and the mother of his three children made the call. At the time, Blake was wanted on a warrant for felony domestic abuse based on a complaint filed by the same woman.

When police arrived, Sheskey watched Blake put one child in the car, unaware two others were already in the backseat. If the officers had done nothing and something had happened to the child, people would be questioning why the cops didn’t intervene, Matthews told CNN.

Police said they attempted to use a taser on Blake after he refused to comply with their instructions. Matthews said Sheskey provided medical aid to Blake after shooting him.

Blake’s family said he was there to celebrate the birthday of one of his children.