Group from Milwaukee is marching to Washington DC. 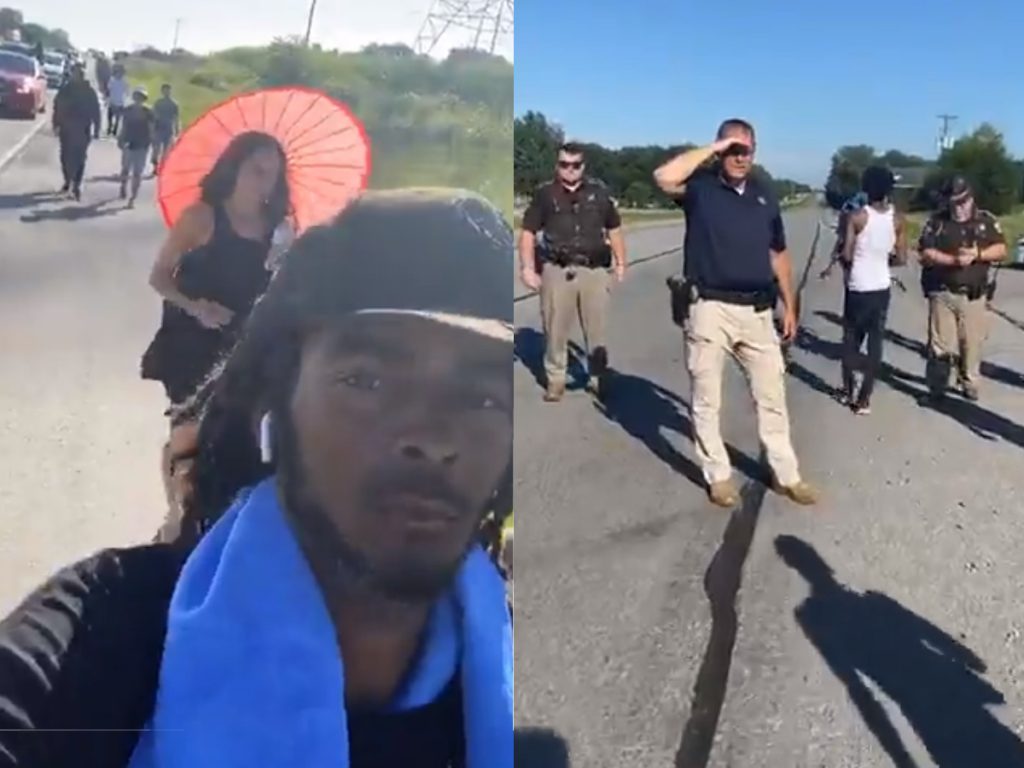 Activists Frank Nitty and Tory Lowe were arrested while walking on the side of a highway in rural Indiana. But the two have been released and Nitty is already back on Facebook.

Nitty had been working on a plan to march to Washington DC in time for a Martin Luther King Jr. rally on August 28th, since July and set out nine days ago with a support group of a couple dozen supporters in tow. He had hoped to go approximately 30 miles per day, arriving in time to commemorate King’s “I Have a Dream” speech.

The activist, one of the leaders of Milwaukee’s racial-justice protest movement, posted on his Facebook page earlier Wednesday “only a few days left in Indiana.” Narrating his Facebook Live videos he has said the group has been subject to threats and verbal assaults while marching. Today he said people have swerved at them, pointed guns at them, thrown food and shoes at them and called them racial slurs.

Lowe, another leader in the movement, filmed a portion of the interaction with Indiana law enforcement personnel before being arrested.

The group was marching on the shoulder of a four-lane highway while support vehicles shielded them in the right-hand lane. Lowe approaches Nitty and others already talking with a plainclothes member of the Indiana State Police. The group had interacted with the officer earlier in the day.

“You’ve got traffic backed up for 67 miles,” said the officer. “That’s a huge concern for safety.” He gave the group the option of the vehicles and marchers both being on the shoulder.

Nitty explained that the group used the vehicles for safety and that people should just pass them in the left-hand lane. “If you want to provide safety then you block the roads for us,” said Nitty.

“Why is your mouth quivering,” said Lowe to the officer. “You’re being aggressive for no reason.”

After Nitty did not comply with an order to leave the roadway, instead attempting to have the officer speak to his attorney, he was asked to turn around and did so. Officers then handcuffed him.

The officer said the group was engaged in “disorderly conduct” by standing on the road.

Get a daily rundown of the top stories on Urban Milwaukee
“It’s an unlawful arrest,” said Lowe, who tried to intercede in Nitty’s arrest repeatedly.

Lowe was placed under arrest for disorderly conduct and then his video stops.

Nitty, who was also broadcasting the entire interaction, handed his phone to another member of the group before being handcuffed.

Nitty, Lowe and another member of the group, Eric Ajala, were booked into Kosciusko County Jail in Warsaw, IN. The group was marching on Indiana Highway 30, near Pierceton, IN.

By 7:00 p.m. Nitty was already out of jail and again broadcasting on Facebook. Lowe and Ajala were also released. The group planned to next go to Fort Wayne before leaving Indiana.

Nitty was previously arrested while marching on the Hoan Bridge in early June, but never charged.

Only a few days left in Indiana Marching thru kkk country💪🏿💪🏿💪🏿Pray for us on this journey….🙏🏾🙏🏾🙏🏾Marching for Justic…Day 75 of marching!!!✊🏿✊🏽 We just left indiana yall✊🏾✊🏼✊🏻March from milwaukee wisconsin to washington dc…750 miles…Day 9 of 24…This is the revolution..We wont stop until we get change!!!✊🏿✊🏽✊🏻#justiceforgeorgeford#TheNewMilwaukee#blacklivesmatter#NittyTv