By Jeramey Jannene and Bruce Murphy - Jun 2nd, 2020 10:19 pm
Get a daily rundown of the top stories on Urban Milwaukee 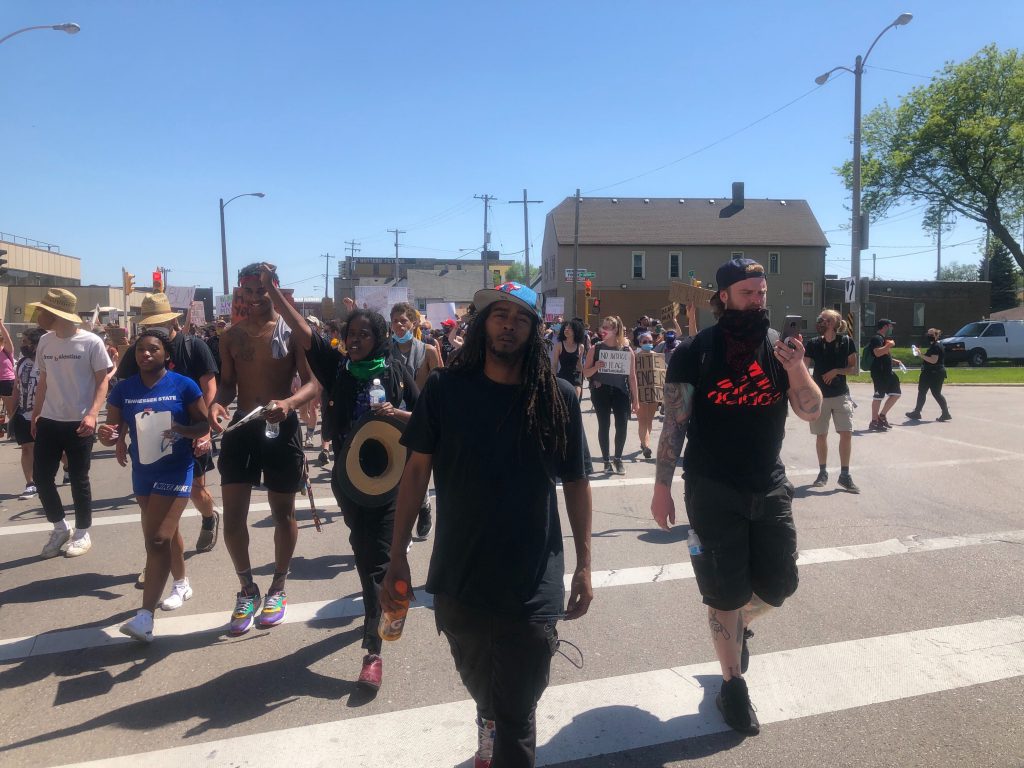 A peaceful march from Bay View to Downtown with widespread community support turned ugly and Milwaukee County Sheriff‘s deputies arrested Frank Nitty, one of the march leaders. (While he is widely known by this name his real name is Frank Sensabaugh.)

It was the fifth straight day of marching after the murder of George Floyd by a Minneapolis police officer. Milwaukee’s marches have also included a call for justice regarding the death of Joel Acevedo at the hands of off-duty Milwaukee police officer Michael Mattioli at an illegal party in April. Mattioli has been charged with homicide, but is out on bail.

The arrest of Nitty happened after several hundred marchers walked onto Interstate 794 and headed south on the Hoan Bridge. A video live stream from Nitty showed the group walking up the freeway with the deputies using gas to block them near the apex of the Hoan Bridge. After the group began walking back towards Downtown, Nitty, wearing a gas mask, is heard discussing the need for peace when a deputy rushes him with a baton and the video cuts out.

Shortly before the group was gassed on the bridge, Nitty can be heard addressing Mayor Tom Barrett and police chief Alfonso Morales. “You’re not going to f*ck with us without causing some motherf*cking retaliation,” says Nitty. “I know how to be peaceful and cause a whole lot of motherf*cking chaos by following the law.” Nitty was expressing frustration with the police department’s use of gas at the end of Monday’s march. Hours after Nitty’s arrest, the police would again use gas on the marchers.

What Nitty was charged with, and if he has been released, is a source of confusion and frustration behind the scenes. The office of Milwaukee County Sheriff Earnell Lucas declined to comment to Urban Milwaukee and said a spokesperson would follow up later. Calls to the cell phone of Lucas by Urban Milwaukee were not answered.

Multiple sources describe a “difference of opinion” between Barrett, who joined the earliest portion of the walk, and Lucas over what to do. Barrett is reported to want Nitty, a popular figure and vocal advocate for peaceful marching, to be released. Lucas is independently elected, while Milwaukee police chief Morales was hired by a board of officials appointed by Barrett.

A source also told Urban Milwaukee that the administration of Gov. Tony Evers has also gotten involved and is concerned about the arrest.

Urban Milwaukee also contacted Milwaukee County District Attorney John Chisholm, who said he was still trying to get information about what had happened. He noted that suspects are often detained and let go without being charged.

Nitty and co-leaders Rafael Mercado and Khalil Coleman guided the march from Bay View through Walker’s Point and across Downtown to the Milwaukee Police Department administration building at 749 W. State St. Throughout the march in Bay View businesses and churches handed out water and food to the marchers.

The interaction with the dozens of police officers guarding the administration building in riot gear was overwhelmingly positive, with Nitty giving a speech calling for justice, equality for all and a need for peace. “We are out here every day until we get change,” he said.

A handful of officers, led first by Minisha Howard, kneeled in support, drawing applause from the crowd. Urban Milwaukee watched another officer tell a protester he couldn’t kneel because of policy, but supported the cause.

But as people departed and new particpants arrived, the group did a circle around Downtown before over 100 people marched up the Broadway onramp to eastbound Interstate 794 at approximately 6:15 p.m. The freeways are typically patrolled by sheriff’s deputies, not Milwaukee Police and as the group of protestors approached the top of the bridge the sheriff’s deputies deployed gas to prevent the group’s advance. Urban Milwaukee captured a canister being thrown off the bridge towards the Historic Third Ward on video and the marchers running back toward Downtown.

The group was allowed to leave the bridge without further incident and continue marching, but Mercado told Urban Milwaukee that Nitty was still in custody as of 6:30 p.m.

Tuesday’s walk, until protesters went on the freeway, was a peaceful event. In a speech on the walk, Mercado said the walk was an example of how the community can rally together. “We are not the most segregated city in America, look at this unity,” said Mercado to a crowd of over 1,000 outside City Hall. He had earlier stopped the group to demonstrate hand gestures used to indicate when to stop and when to be quiet. He also said use of phrases like “f*ck the police” were unacceptable.

At 8:29 p.m. the Milwaukee Police Department reported that it had ordered the protesters to disperse and used tear gas. “A suspect with a gun who was in the crowd has been taken into custody by MPD. For our safety and the safety of our residents we had used gas to disperse the crowd,” wrote the department. A video shows the police gathering and firing the tear gas canisters, which later explode. Urban Milwaukee reporter Graham Kilmer was on the scene and reports that the group was effectively cornered at N. 6th St. and W. McKinley Ave. “You don’t exactly look mobile, you’re going to get run the f*ck over, not by us, but by them,” said an MPD officer to the individual filming the video who uses a wheelchair. Urban Milwaukee observed the videographer rolling alongside the protest without issue for much of the afternoon.

Urban Milwaukee was with the group from its start until heavy rain fell around 10:30 p.m. For videos and photos from the event, see a Twitter thread from Jeramey Jannene.

A march that ended just before 3 a.m. Tuesday morning was peaceful until the dwindling group was cornered near N. 6th St. and W. Capitol Dr. Spike strips and tear gas were used to disperse the crowd according to multiple marchers.

Nitty, in an interview with Urban Milwaukee on Tuesday afternoon, said he was frustrated by how things ended Monday morning, but viewed it as a misunderstanding between the different police units. Moments before the group was cornered, Urban Milwaukee watched police officers plan to allow the group to march south on N. Port Washington Rd. before new officers arrived on the scene and things then escalated. Multiple protesters told Urban Milwaukee about running from gas and having to climb a barbed wire fence. Nitty said he was able to leave without climbing the fence. 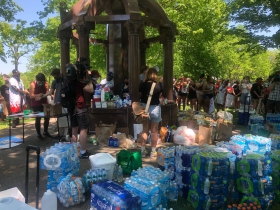 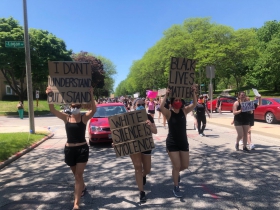 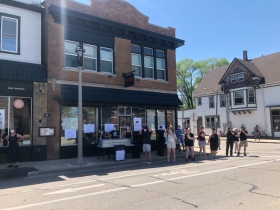 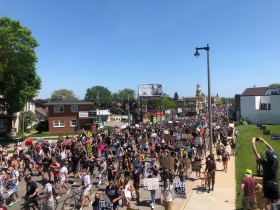 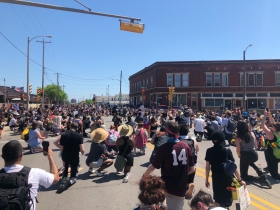 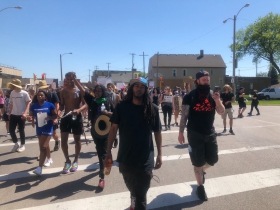