By Isiah Holmes, Wisconsin Examiner - Jul 10th, 2020 01:32 pm
Get a daily rundown of the top stories on Urban Milwaukee 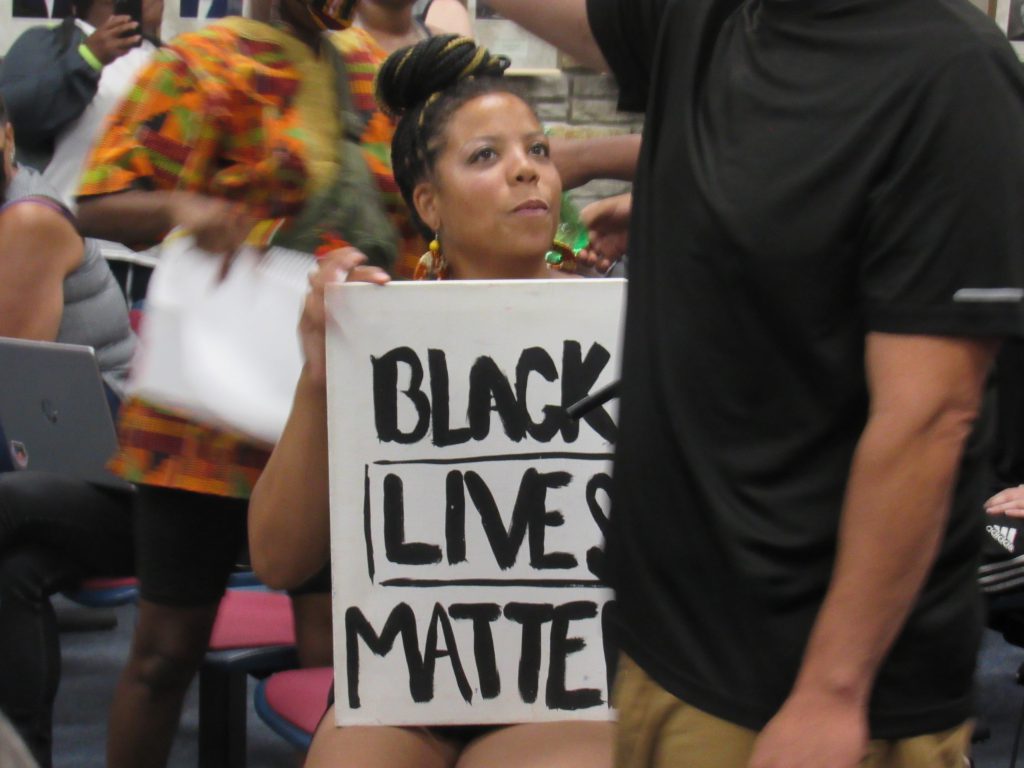 A faction of Milwaukee’s Black Lives Matter movement calling itself “The People’s Revolution” has issued a six-page letter, addressed to Wauwatosa (Tosa) Mayor Dennis McBride, and all the suburb’s alders. It decries the police department’s escalating tactics of arrest and intimidation against marchers and provides a list of 10 demands to be honored by the city.

“The winds of history are blowing swiftly on the side of justice,” the letter begins, “and as elected officials of the City of Wauwatosa, you stand in a moment where you must decide whether to move with those winds or continue moving against them.” Milwaukee’s protests have endured for over 42 straight days, spreading into neighboring areas and suburban communities. In Wauwatosa, the marchers have focused their efforts around three fatal shootings involving the same local police officer.

Joseph Mensah first arrived at Tosa PD in 2015. Within months of getting the job, Mensah was involved in the killing of 28-year-old Antonio Gonzales. Less than a year later, Mensah killed 25-year-old Jay Anderson, Jr., who was alone in his car at the time. Nearly four years would pass before the officer again took a citizen’s life, this time 17-year-old Alvin Cole. Mensah was cleared of wrongdoing for the first two shootings, and Cole’s case is still under investigation by the Milwaukee Police Department (MPD) and District Attorney John Chisholm. Tosa PD officers, besides those assigned to motorcycle patrols, are not issued body cameras.

Cole’s family has been involved in many of the marches, though the wider movement in Milwaukee County is decentralized and wide-spread. Because the teenager died at Mayfair Mall, near the area’s Cheesecake Factory, many of Tosa’s protests have used the mall as an epicenter and rallying point.

“Mayfair Mall is a driving economic and retail hub for the city that attracts people and money from all over southeastern Wisconsin,” reads the People’s Revolution letter. “In particular, it is a popular destination for people of color in Milwaukee County, who visit the mall to spend their hard-earned dollars and time with friends and family.” Wauwatosa is about 86% white today, though that statistic was 90% just a decade ago. Its police department has made efforts in recent years to hire more minority and female officers to its force.

These slight shifts, however, haven’t deterred the department from escalating its tactics against local marchers. On July 2, Cole’s case gained major attention after rapper and Hip Hop mogul Jay-Z, the Jonas Brothers, and other celebrities showed their support for the Cole family. Roc Nation, a social justice organization founded by Jay-Z, took out a full page open letter addressed to Chisholm in the Milwaukee Journal Sentinel.

Five days later, Cole’s family would receive a phone call from Tosa PD leadership warning them not to protest, or they would face arrest. That same day, on July 7 Tosa PD, alongside several other Milwaukee and Brookfield-area law enforcement agencies, confronted a group of protesters at Mayfair’s Cheesecake Factory.

Some marchers were arrested, although they were released before the police left. It’s still unclear who exactly requested that police respond in this manner. Kimberley Motley, a lawyer representing the families of those Mensah has shot, wrote Chief Barry Weber and the city attorney regarding the “inappropriate” call.

“We are troubled by the actions of the Wauwatosa Police Department and Chief of Police Barry Weber at the Cheesecake Factory,” reads the People’s Revolution letter. “We are troubled, too, by the actions of Mayor McBride and the Common Council who, according to officers, instructed the Wauwatosa Police Department to show incredible force and arrest, detain, harass, and intimidate peaceful protesters. Further, the request (by an unnamed official) for assistance from the Brookfield Police Department, West Allis Police Department, Wisconsin State Police, and Milwaukee County Sheriff’s [Office] — seemingly to heighten intimidation — put the lives and well-being of the general public at risk.”

Tosa PD has yet to return Wisconsin Examiner’s requests for comment regarding the call to the Cole family, and the actions on July 7. During a city meeting on July 7, McBride explained to protesters that the city council does not have authority over the police department. A Tosa alder, when informed of the claims by officers that the city ordered the action, told Wisconsin Examiner, that this wasn’t the case due to the council’s lack of authority over Tosa PD. It remains unclear who ordered the Cheesecake Factory response.

“At this time, there will be no business as usual in Wauwatosa,” reads the People’s Revolution letter. “The urgency of now requires you to act. Nothing is more pressing in the City of Wauwatosa, Milwaukee County, the State of Wisconsin, or the United States than ending police brutality and misconduct, holding police officers accountable when they engage in wrongdoing, and making real, meaningful changes that begin to fix the scourge of systemic racism in this country.” The letter  goes on to declare, “the Wauwatosa Police Department continues to demonstrate a gross lack of accountability, so it is crucial that Wauwatosa be a part of this necessary change.”

Wauwatosa has long held a troubled place in Milwaukee’s story of racial discrimination. Less than a century ago, the suburb had “housing covenants” which formalized — on paper — policies that restricted Black residents from acquiring housing in Wauwatosa. In Weber’s early days as chief in the late 80’s, his department had to deal with the charging of 13 officers by the Police and Fire Commission for racist behavior. The officers held annual Martin Luther King Day parties, where officers dressed in black-face and passed around derogatory materials about African Americans.

“The City of Wauwatosa has a very ugly past when it comes to racial discrimination,” reads the letter. “And Chief Weber’s record, and the length of his tenure, indicate that he is still operating his police department under the assumption that the color of one’s skin somehow relates to the likelihood of their criminality.”

The People’s Revolution activists are calling on the City of Wauwatosa to hold a special common council session the week of July 13. On July 15, the police and fire commission is already scheduled to hold a meeting regarding a complaint filed by Motley’s law firm against Mensah due to the Anderson shooting in 2016. Activists are requesting that the session include public comment, something that some of the city meetings have not provided. Activists are also requesting the following demands be met in regards to the proposed special session: