Election Director Nominee Is Back In

Claire Woodall-Vogg would like to run Milwaukee Election Commission after all. 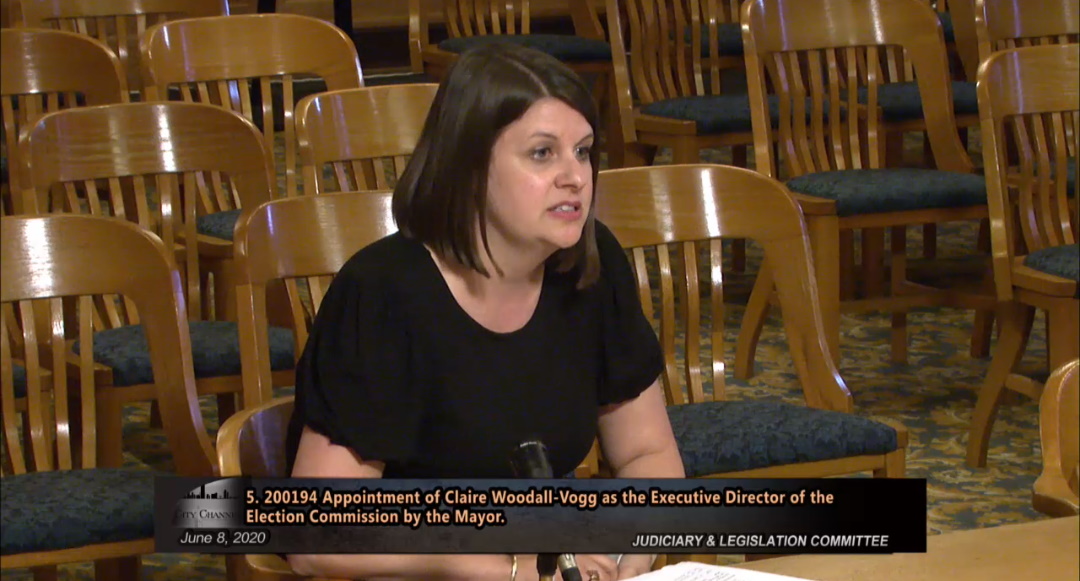 What a difference a week makes.

After emailing the Common Council to announce she was withdrawing her candidacy to serve as Executive Director of the Milwaukee Election Commission last Thursday, Claire Woodall-Vogg wants the job again.

“I would like to express to you my continuing desire to serve in the role of executive director of the Election Commission. Over the past week, through thoughtful conversations with members of the Council, community partners, other city employees, and poll workers, I have been assured of the support and assistance that the Election Commission needs in order to remove as many barriers to voting as possible,” she wrote in a new letter to the Common Council. “Now, more than ever, I feel entirely equipped and confident in my ability to lead the department forward during this pivotal time.”

That’s a marked change from her message last week.

“The advice given to me over the past week has been to be less transparent and honest in order to be appointed by Council and to survive this City’s political landscape,” she wrote in a June 25th email. “My mentor told me to commit to continuing the worst and most challenging year of my life because this job will be worth it.”

She was poised to be confirmed on June 16th, but the council held all of Mayor Tom Barrett‘s cabinet-level appointments in the wake of the George Floyd protest movement to address racial equity issues.

“As someone born and raised in Birmingham, Alabama, the importance of voting rights, voting access, and racial equity has never been lost on me,” she wrote in her latest letter. “The barriers that prevent access to voting are now more subtle than the overt tactics negated by the 1965 Voting Rights Act. These new tactics include a restrictive photo ID requirement, burdensome proof of residency in order to register to vote, and continued restrictions to in-person absentee voting.”

Woodall-Vogg has worked for the election commission since 2013, less an eight-month stint in 2019 as Cedarburg City Clerk. West Allis city records show Mayor Dan Devine had moved to appoint her the suburb’s City Clerk on June 24th.

Her withdrawal initially drew alarm because with no deputy, only executive director Neil Albrecht had the authority to do a number of election functions and he has announced his intention to retire. Absentee ballots are in the process of being mailed for the August 11th primary.

Unlike the appointees who are facing reappointment, Woodall-Vogg does not receive authority to run the commission until her appointment is confirmed.

The appointee wrote last week that she had already planned to fill her current position and that of the deputy director, but because her appointment has been held she has been unable to do so. “The delay of the Council’s vote has more than doubled my own workload since I am unable to fill two management-level positions in a department of nine,” she wrote. But Albrecht could advance the hiring for those positions.

The commission oversaw a complicated April 7th election that saw only five polling places open, down from over 150, after Albrecht said the scale of the city’s COVID-19 outbreak relative to the state drastically cut the number of polling workers willing to work. The city then had to rent special office space to deal with a record number of absentee ballots and social distancing guidelines.

Council members have expressed frustration regarding the emergency council meeting called June 11th for 11:30 p.m. to meet a state deadline to approve early voting sites. The council does not ordinarily approve the early voting locations, but did this time. Albrecht accepted all blame for the situation on Monday of this week, but council members focused many of their questions towards newly-elected City Attorney Tearman Spencer.

Woodall-Vogg, who has continued to serve in her current role and appeared at Monday’s meeting, said she is ready to serve in the new role.

“The months ahead will be difficult. I know that, but also find great strength and assurance in knowing that the members of this Council, the Mayor, and our community partners share in my dedication to fair access to voting. I would like the opportunity to continue an open and transparent relationship with members of this Council and to stand with you in our tireless efforts to protect voting rights and expand access to voting,” she wrote.

The Common Council could move to confirm her appointment at its regularly scheduled July 7th meeting.

2 thoughts on “City Hall: Election Director Nominee Is Back In”