Says she was working 18-hour days in worst year of her life and told to be less honest to be confirmed. 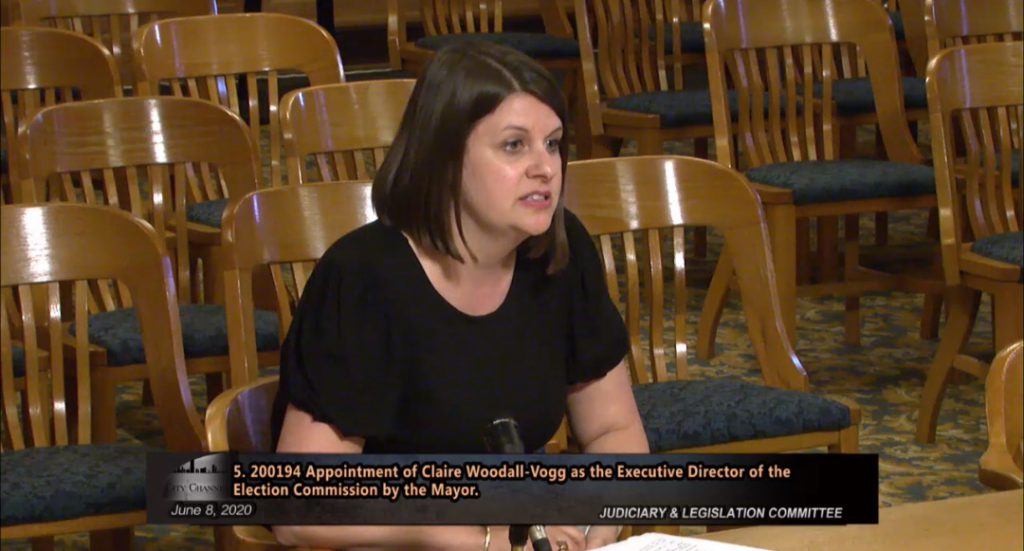 Mayor Tom Barrett‘s nominee to run the Milwaukee Election Commission has withdrawn her candidacy, triggering a staffing crisis as the August election approaches.

Claire Woodall-Vogg, who has worked for the commission for seven years, was set to be confirmed on June 16th, but the council voted to hold every cabinet appointment in the wake of the George Floyd protests to hear plans for addressing the “quality of life for black people.”

“The advice given to me over the past week has been to be less transparent and honest in order to be appointed by Council and to survive this City’s political landscape,” said Woodall-Vogg in a letter to the council. “My mentor told me to commit to continuing the worst and most challenging year of my life because this job will be worth it”

The Election Commission, with absentee ballots in the process of being mailed for the August 11th primary, now faces a problem that some council members suggested might happen when they held the appointment.

Longtime Executive Director Neil Albrecht wants to retire, but had agreed to stay on until Woodall-Vogg was confirmed. Deputy Director Theresa Gabriel resigned June 12th. If Albrecht leaves the city would have no one with the authority to perform a number of election functions. Woodall-Vogg currently serves as the business systems administrator.

The appointee wrote that she had already planned to fill her current position and that of the deputy director, but because her appointment has been held she has been unable to do so. “The delay of the Council’s vote has more than doubled my own workload since I am unable to fill two management-level positions in a department of nine,” she wrote.

Woodall-Vogg expressed frustration that not a single committee member asked a question of her during her first confirmation hearing, which followed almost two hours of discussion of other election issues. But committee chair Alderman Ashanti Hamilton did ask Woodall-Vogg about the use of technology and Ald. Scott Spiker thanked her for a private briefing where she educated him on election issues. When the cabinet positions were held at council, Hamilton said it wasn’t because of the appointees individually, but was about taking advantage of the moment in time to drive change.

“Access to voting is the most basic and universal human right in a democracy – or at least it should be. My daily motivation has been to remove as many barriers to voting as possible despite every effort made by the legislature to block voting access. The voting rights of minorities have been openly under attack for a solid decade in this state and have always held historic significance in our country. No member of this Council asked me what I have done or plan to do to counteract and remove the barriers and improve the voting rights of the citizens of Milwaukee – behind closed doors or at my hearing. No one expressed any doubt about my commitment to the City or to ensuring that democracy is accessible to all citizens, especially those targeted and marginalized by systematic racism. In fact, not a single committee member asked a question at my hearing,” she wrote.

The commission oversaw a complicated April 7th election that saw only five polling places open, down from over 150, after Albrecht said the scale of the city’s COVID-19 outbreak relative to the state drastically cut the number of polling workers willing to work. The city then had to rent special office space to deal with a record number of absentee ballots and social distancing guidelines.

There is also the matter of the 11:30 p.m. meeting emergency council meeting called June 11th to meet a state law deadline to approve early voting sites. The council does not ordinarily approve the early voting locations, but did this time.

Calling it a “mess,” Ald. Robert Bauman said it warranted another hearing for Woodall-Vogg. “We will not be strong-armed,” said Bauman of the need to act because the department was short-staffed. But multiple sources told Urban Milwaukee that Woodall-Vogg is the one that noticed the city was about to be out of compliance with a state law.

Alderwoman Milele A. Coggs introduced the cabinet-hold proposal and said she wasn’t prepared to vote for Woodall-Vogg. She warned Spiker and others that tried to break off Woodall-Vogg from the other holds that Woodall-Vogg could end up being rejected. “We could come out of today with no election commissioner candidate,” said Coggs on June 16th.

Woodall-Vogg said she was committed to poll worker recruitment and needed all the time she could get. “Elections are administered by the hour and day, not by weeks,” she wrote.

“I have planned and delayed the growth of my family, missed my father-in-law’s funeral, and sent my toddler to live with his grandparents out-of-state for 3 weeks during the most recent election so that I could work 18-hour days – all for a cause that I have always believed in. I no longer feel that my personal sacrifice, at the expense of my family, is worth it,” wrote Woodall-Vogg.

She has worked for the election commission since 2013, less an eight-month stint in 2019 as Cedarburg City Clerk.

“I will not make promises that I cannot keep, commit to projects that I cannot staff, or be subject to political grandstanding and scrutiny from Council members who have consistently refused to provide me with the common courtesy of a meeting or phone call over the past month to discuss my appointment and concerns with the department,” wrote Woodall-Vogg.