Over 200 workers sort, count and process thousands of ballots in a downtown office building. 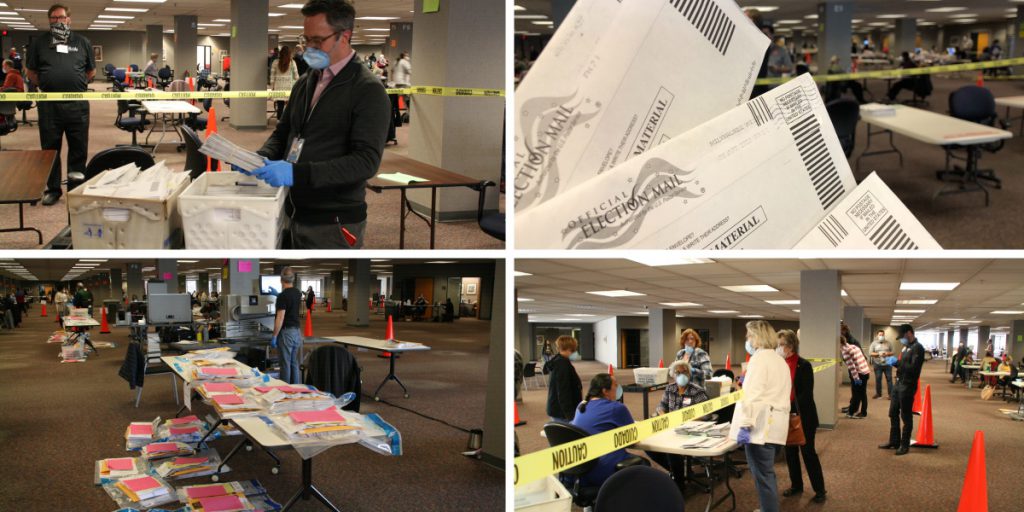 Absentee vote counting in the city of Milwaukee. Photos by Jeramey Jannene.

Tucked away on the fourth floor of a vacant downtown office building, approximately 200 mask-clad workers process ballot after ballot for the City of Milwaukee.

They’re not part of a covert operation to steal an election. It’s a public process that comes as the result of a nearly five-fold increase in mail-in voting and the need to enforce social distancing rules related to the COVID-19 outbreak. The Milwaukee Election Commission (MEC) issued 96,712 absentee ballots for the latest election, up from approximately 15,000 in 2016. A total of 71,556 have come back by mid-day Thursday.

Workers would normally process the ballots in close proximity to one another in a drab, one-story warehouse at 1901 S. Kinnickinnic Ave., but now they’re spread out over a 62,000-square-foot floor at 501 W. Michigan St. with lots of natural light and skyline views. Just one more twist in what is certain to be remembered as the most unusual election in state history.

The workforce is a mix of city employees and others looking to lend a helping hand and collect a $130 per day check occupying a space once filled by employees of Assurant Health. But more akin to construction workers than office workers, they’re separated from dozens of election observers by orange cones and caution tape.

The city’s makeshift team is working on everything from checking newly-arrived envelopes from the United States Postal Service (USPS) for postmarks and sorting ballots by ward to scanning ballots and reconstructing those that are damaged.

Everyone that enters has their temperature taken with a thermometer. It’s not a full COVID-19 test, but is intended to prevent anyone noticeably ill from entering the site.

A relatively quiet operation is sometimes interrupted with sitewide announcements of accomplishments. Temporary city employees must fill out paperwork if they want to get paid.

I arrive, after passing my own temperature test, to find MEC Executive Director Neil Albrecht on the phone. A number of city employees, including former alderman Jim Bohl and Department of City Development spokesperson Jeff Fleming, can be spotted delivering ballots and answering questions from workers situated at folding tables processing ballots.

This is day three of the operation, with the state law allowing absentee ballots to be counted starting when polls open on election day. I saw workers either totally consumed in their work or sitting idly making small talk, scrolling through social media apps on their phones as they await more ballots.

Albrecht tells me he was on the phone with Michael Haas, the staff counsel for the Wisconsin Elections Commission. Workers, under the watchful eye of election observers from the Republican Party and other organizations, have had to place a number of absentee ballots aside because the postmarks are missing or illegible. Albrecht is expecting state guidance on the issue.

The Supreme Court of the United States ruled Monday evening that ballots had to be postmarked by April 7th or earlier, reversing an earlier ruling that said ballots must just arrive by April 13th at 4:00 p.m. But, for reasons that aren’t immediately clear, certain ballots get mailed back having never been postmarked by USPS. Others are smudged. Albrecht attempts to find me an example of a good one, but can only find one with a faint postmark after a quick search.

The Wisconsin Elections Commission is expected to provide guidance on whether the ballots can be counted or not on Friday. What happens if the commission says yes to counting them and a court later intervenes? Albrecht says it’s hard to say, but the ballots would likely be integrated with the others at that point and not able to be identified.

The issue is more pronounced in other municipalities that used certain bulk postage metering systems that result in none of the ballots being postmarked said Albrecht. But in Milwaukee, election workers can’t explain why they’re left with an ever-growing pile of ballots with no postmark. The whole situation is “unfortunate” said Albrecht. Ballots that arrived by mail on Wednesday and Thursday came from voters complying with the spirit of the Supreme Court’s ruling to require ballots be mailed back by the end of election day, but there isn’t the explicit proof the court asked for.

Ballots arriving Friday and through the weekend without a postmark raise a bigger question. They could have been mailed after the election. Mail service around the election has been challenged, with thousands of ballots never arriving despite being sent by municipal clerks across the state. Albrecht is formally requesting an investigation by USPS into the issue. Hundreds of the ballots have started to appear across Wisconsin, but too late for voters that continued waiting and didn’t vote in person.

Another issue exists for the approximately 750 absentee ballots the city has without a witness signature. The requirement was suspended by a federal court ruling, but reinstated by a federal appeals court.

Regardless of the outcome of the different ballot issues, the workload for the city’s workforce will diminish over the coming days as the number of ballots coming in by mail slows. But it will scale back up on Monday. Starting at 4:00 p.m. on April 13th, Milwaukee and over 1,800 municipalities across the state can process their in-person ballots, currently stored in secured bags. Election results will come later that night.

How are election results kept secret right now? Albrecht said the machines store the results, only showing them when printed and the city hasn’t done so. Should something happen to the machines (or a recount be needed), the paper ballots are kept and could be recounted.

But the number of absentee ballots returned still lags the state average. The City of Milwaukee has received approximately 74 percent of its absentee ballots back, but statewide the average is 83.5 percent according to figures posted Friday morning by the Wisconsin Elections Commission. In Milwaukee County, including the city, the return rate is 82 percent. 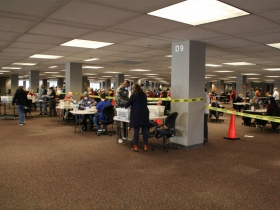 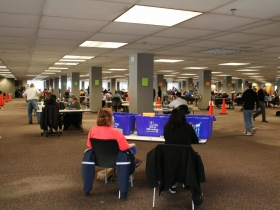 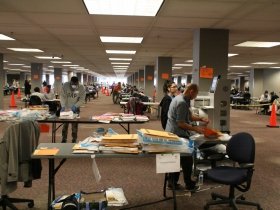 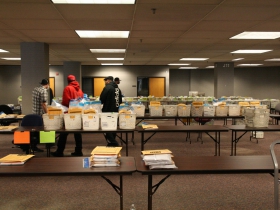 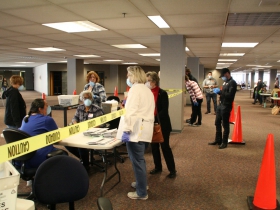 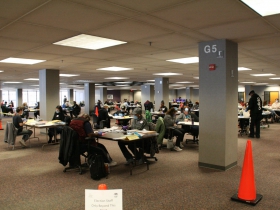 Want to see what the city’s five polling places looked like? See our election day coverage. For more on why the city had only five voting centers, see our earlier coverage.