Who Benefits From the Madison Vandalism?

History suggests it could change the narrative, change voters’ views.

When the press reported that rioters who smashed windows, seized a tow-truck, and toppled statues representing “Forward” and the abolitionist and civil war hero Hans Christian Heg, at least one person was delighted: President Donald Trump. According to the Journal Sentinel, in a visit to Wisconsin, Trump “blamed unrest in Madison and the assault of a state senator this week on Democratic Gov. Tony Evers, contending it wouldn’t have happened under former Republican Gov. Scott Walker.”

In response to a question, Trump referred to the protesters attack on Wisconsin Senator Tim Carpenter:

The person they beat up was a Democrat who happened to be gay, and he was probably out there rooting them on or something, because Democrats think it’s wonderful that they’re destroying our country.

Evidently, Trump is hoping that running as the “law and order” will salvage his hopes for a second term. So far, that strategy does not seem to be working. This is reflected in the most recent Marquette Law School Poll, which was taken June 14 to 18 in the midst of the protests.

The poll asked a number of questions related to the protests. Here are responses to the question, “Do you approve or disapprove of the mass protests that have been held since the death of George Floyd in Minneapolis?” The graph below shows the responses, based on the voters’ ethnicity and partisan leanings. A majority of every group, other than Republicans, approves of the mass protests. 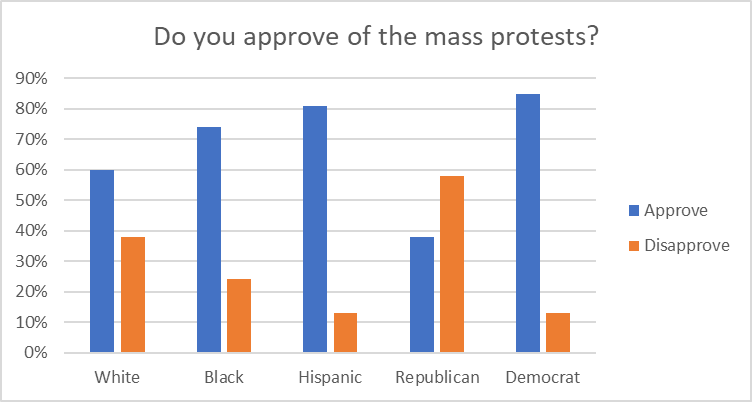 Do you approve of the mass protests?

The next question asks, “Do you approve or disapprove of the way Donald Trump is handling the response to protests about the death of George Floyd in Minneapolis?” The responses are almost a mirror image of the earlier question on mass protests. 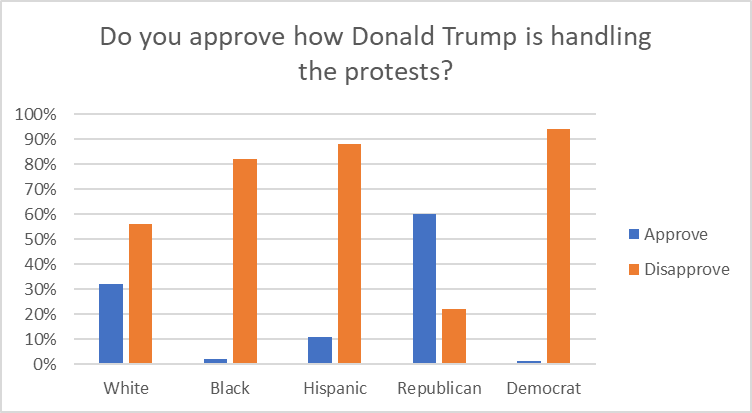 Do you approve how Donald Trump is handling the protests?

Two questions were repeated from a poll four years earlier. One asked, “How would you describe your feelings about the police in your community? Would you say they make you feel mostly safe or mostly anxious?” The results from 2016 are shown with stripes while those from this year with solid bars. Blue shows those responding “mostly safe”; with those saying “mostly anxious” in orange. Among Blacks, it appears that the anxiety level around police has increased. 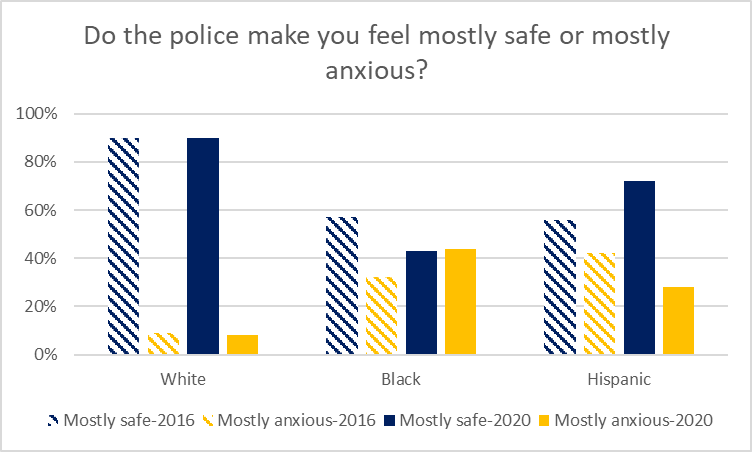 Do the police make you feel mostly safe or mostly anxious?

The second repeated question asked whether the voter agreed with the statement: “There is a lot of discrimination against Blacks in the U.S. today, limiting their chances to get ahead.” An increasing percentage of whites, Hispanics, Republicans, and Democrats agreed. The strongest split was between Republicans and Democrats. 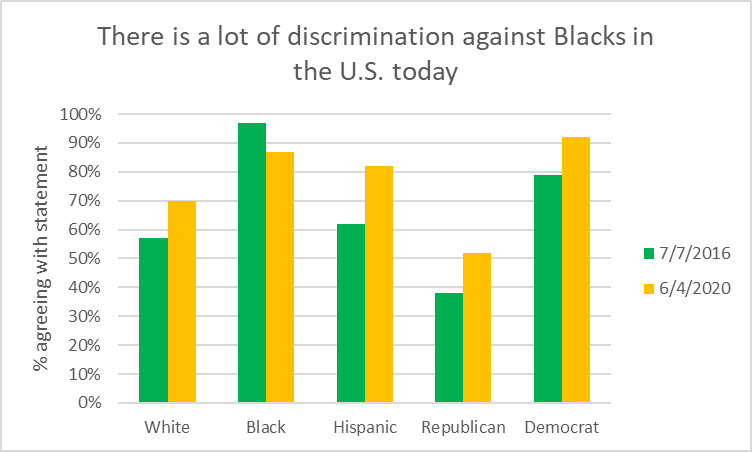 There is a lot of discrimination against Blacks in the U.S. today

Princeton’s Omar Wasow recently examined county-level voting patterns in the 1960s. He found that exposure to nonviolent protests pushed people to vote for the more liberal presidential candidate, while exposure to violent ones pushed people to vote for the more conservative candidate. He concluded that protests in the early part of the decade, in which violence was initiated by police and not protesters elevated the “justice frame,” enabling the passage of the Voting Rights Act and other civil rights legislation.

Later in the decade, protesters became more violent, elevating the “riots frame,” which Wasow measured in part by a shift in the words used in headlines. He concludes in the absence of violent protests, Democrats would likely have won the presidential election of 1968: “In this counterfactual scenario, the United States would have elected Hubert Humphrey, lead author of the Civil Rights Act of 1964, rather than Richard Nixon.”

In an article in Politico, Charlie Sykes makes a similar point using the attempt to recall Scott Walker. Sykes argues that early polls showed that Walker’s program to weaken collective bargaining rights was unpopular and Tom Barrett was likely to defeat him in 2014.

But as the protests swelled, public opinion began to shift. The over-the-top rhetoric and tactics of Walker’s opponents became the issue.

Sykes concludes that “in Wisconsin, this may be the Republicans’ only play. And they know that it has worked before.”

Attacking an innocent bystander is indefensible under any circumstances. So is vandalism and robbery. However, it is even more destructive when it serves to undermine efforts to make Wisconsin and the U.S. fairer. Thus, the importance of the cause, rather than justifying the crime, makes the crime worse. But too often liberals shy away from this conclusion.

Consider these paragraphs by Ruth Conniff in the liberal Wisconsin Examiner:

It’s easy enough to blame protesters for playing right into the Republicans’ hands. Even progressives who are inclined to be supportive are turned off by the destruction, and moderates, especially local business owners, may become suddenly more receptive to the law-and-order argument that we need more police protection, not less.

But rather than condemning the behavior, Conniff changes the subject:

But that’s not really the point.

The deeper point is that we are feeling the impact, close to home, of deep, historical injustice that it is frankly pretty easy for white liberals to overlook.

Somehow it doesn’t matter to those who escalate peaceful protest to violence that the vandalism and physical attacks are a gift to Trump, Vos, and others of their ilk. History has proven the folly of this attitude.

One thought on “Data Wonk: Who Benefits From the Madison Vandalism?”