What Happened at Madison’s Protests 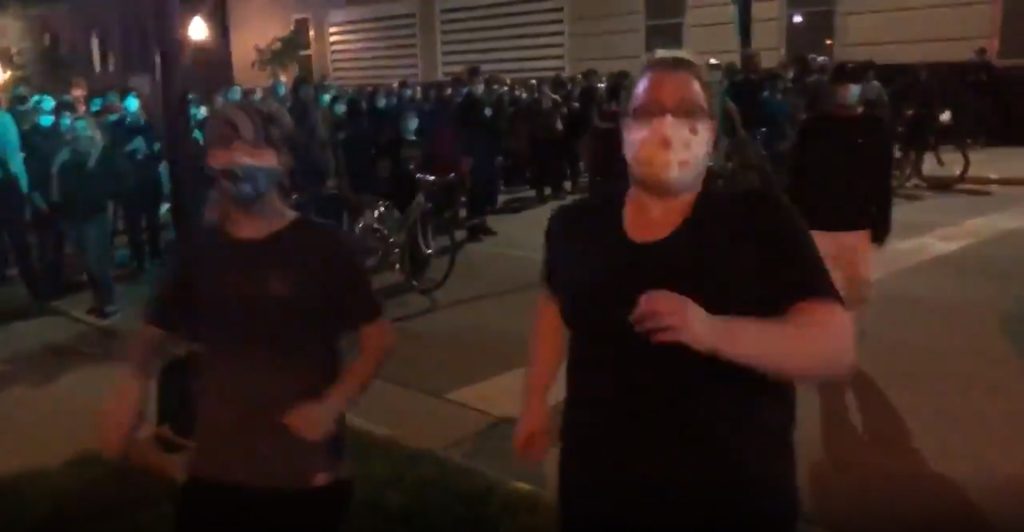 After weeks of peaceful marches responding to the killing of George Floyd at the hands of Minneapolis police, Madison erupted last night in violence after a protester was arrrested.

“Devonere Johnson, 28, was arrested after causing a disturbance in a restaurant on the Capitol Square,” the Wisconsin State Journal reported. “Johnson walked around the patio of Coopers Tavern, carrying a baseball bat over his shoulder, according to video provided by Madison Police. Johnson then followed a white customer inside the restaurant, calling him a racist through a bullhorn and using profanities, the video shows.”

Johnson — who identified himself as Yeshua Musa while inside the restaurant — has been among a group of activists seen on Madison’s streets in recent weeks protesting police brutality, the newspaper reported, and his arrest was described  by observers on Twitter.

Actvist Yeshua Musa was arrested after disrupting the lunch crowd at Cooper’s Tavern with a megaphone, sustaining abrasions in a struggle with police. Hundreds of people took to the streets to protest, and at least four cars struck protesters. https://t.co/Jf9wU4ohPf

Another tweet, by Roberto Pedone, offered a video of the arrest:

This is one part of the arrest video of activist Yeshua Musa in #Madison from earlier Tuesday. The police were called because he was walking up to people in restaurants with a bat and megaphone, allegedly. . pic.twitter.com/2DwiWFCoJC

“Video released by the Madison Police Department showed the man talking through the megaphone Tuesday while walking near the restaurant’s outdoor patio,” Wisconsin Public Radio and the Associated Press reported. “After leaving the restaurant, officers arrested the man. In videos of the arrest, the man can be heard asking repeatedly: ‘Why are you arresting me?'”

Videos of the arrest “show as many as five officers taking Johnson to the sidewalk and carrying him to a police squad car after Johnson initially resisted arrest” the State Journal reported.

Adding to the anger over the treatment of Musa was an incident that happened several hours later, when a driver in a white truck tried to drive through the protesters. “Police officers arrived on the scene a short time later” and “escorted the driver of the truck to another squad car and drove away,” as Madison TV station NBC15 reported. The difference in the treatment of this man versus Musa may have helped set off violent protests.

I took this pic- it got me assaulted & beat up. Punched/kicked in the head, neck, ribs. Maybe concussion, socked in left eye is little blurry, sore neck & ribs. 8-10 people attacked me. Innocent people are going to get killed. Capitol locked- stuck in office.Stop violence nowPlz! pic.twitter.com/Zw2hdfYG66

“I don’t know what happened … all I did was stop and take a picture … and the next thing I’m getting five-six punches, getting kicked in the head,” Carpenter told a Milwaukee Journal Sentinel reporter following the assault.

“Following the assault, Carpenter was seen hunched over on the ground near his car,” the State Journal reported. Madison WKOW reporter Lance Veeser later tweeted that Carpenter “collapsed walking towards the Capitol.”

By early evening, protesters had gathered outside the Dane County Jail, where Musa was being held, and began marching Downtown, the State Journal reported. “Roughly 300 protesters blocked traffic, yelling at drivers and telling them to join the demonstration… Organizers stood on top of a tow truck, vowing that the night would not be peaceful… “We’re done being peaceful. Now we demanding justice,” one protester said.

Protesters removed two Capitol statues from their pedestals, WPR reported: “the Forward statue, located on the west entrance of the Capitol at the end of State Street, and a statue of Col. Hans Christian Heg, located on the east entrance of the Capitol at the King Street corner of the square…. Protesters took the Heg statue and dumped it in Lake Monona, almost a half-mile from where it was toppled. And the Forward statue “as of early Wednesday morning, was about a block from the state Capitol in the middle of the street.”

“Protesters set a small fire on one of the windows of the City-County Building Downtown, which also houses the Madison Police Department’s Downtown station,” the State Journal reported. “A group shattered the front entrance windows of the Tommy G. Thompson Center on Public Leadership, which houses several state offices, and others knocked down street cameras or spray painted over the lenses.”

“A molotov cocktail also was thrown into the Madison and Dane County administration building where the county jail sits,” the JS story reported.

“Just before 1 a.m. Wednesday, as protesters began trying to break the windows and doors of the Capitol, police arrived in riot gear and said the group was ‘unlawfully gathered,'” the State Journal reported. “Officers warned everyone to leave the area… ‘Free Yeshua,’ some in the crowd chanted as they hurled taunts and insults at police officers,”

“Protesters continued to face off against police about a block from the Capitol,” WPR reported, and “according to an MPD incident report, pepper spray ‘was deployed from within the State Capital (sic) building to repel individuals who were attempting to force entry.’ Eventually, the crowd thinned out and police left the area.”

Gov. Tony Evers released a statement Wednesday morning saying he is prepared to call in the Wisconsin National Guard if necessary, and condemned the violence: “I want to be clear: violence against any person— whether in the middle of the street in broad daylight, at home trying to sleep, going for a run, or happening upon a protest as was the case last night — is wrong… It should never be tolerated… Any single act of injustice against one person is less justice for all of us, and the people who committed these acts of violence will be held accountable. My thoughts are with Sen. Carpenter who was among the individuals attacked last night and wish him a quick recovery.”

This morning a statement was released by Ebony Anderson-Carter, who said she was speaking on behalf of multiple groups of protesters. In her statement, Madison TV station WMTV NBC 15 reported, Anderson-Carter said they were demanding the release of the man arrested, presumably Devonere Johnson, as he was named in the arrest,  and “also demanded a Madison Police Department officer be fired and that the department itself be defunded and the money be ‘reallocated to the community.'”

Evers’ office said Wednesday that both statues have been recovered. The Forward sculpture is a replica of a Jean Pond Miner sculpture that was installed in the Capitol in 1895 that symbolizes the state slogan “Forward” and was designed as an allegory for devotion and progress. The statue of Heg, an anti-slavery activist who fought and died for the Union during the U.S. Civil War, is nearly a century old.

Wisconsin State Assembly Speaker Robin Vos (R-Rochester) blasted Madison officials for their handling of the protest: “This is absolutely despicable. I am saddened at the cowardice of Madison officials to deal with these thugs,” he tweeted. Vos also called out Gov. Evers in the tweet, asking: “are you going to finally do something about these protestors committing crimes on state property?”

Carpenter, according to the Washington Post story, wrote a statement lamenting the violence, saying: “This has got to stop before someone gets killed. Sad thing I’m on their side for peaceful demonstrations — am a Gay Progressive Dem Senator served 36 years in the legislature.”

6 thoughts on “What Happened at Madison’s Protests”