Everybody Wants Action From Gov. Evers

By Melanie Conklin, Wisconsin Examiner - Jun 29th, 2020 01:54 pm
Get a daily rundown of the top stories on Urban Milwaukee 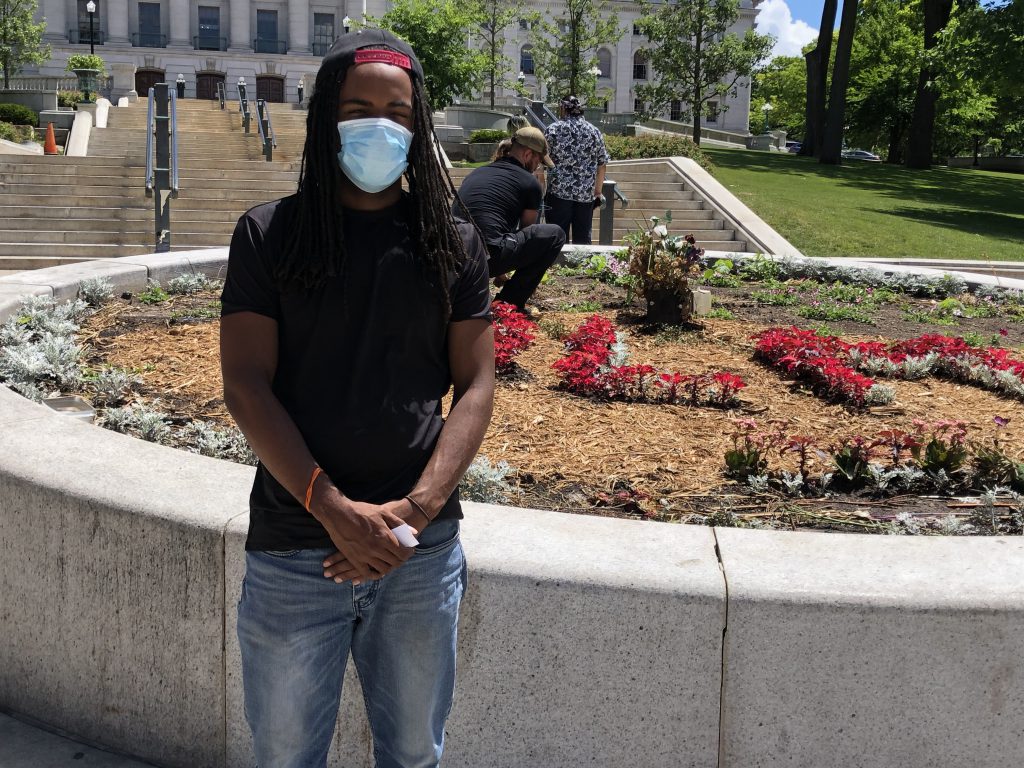 The protesters who toppled Capitol statues, smashed windows and seized a tow-truck on Tuesday night have at least one thing in common with the Assembly Republican leadership that gathered on the Capitol steps above where the “Forward” statute had been until it was ripped down the night before. 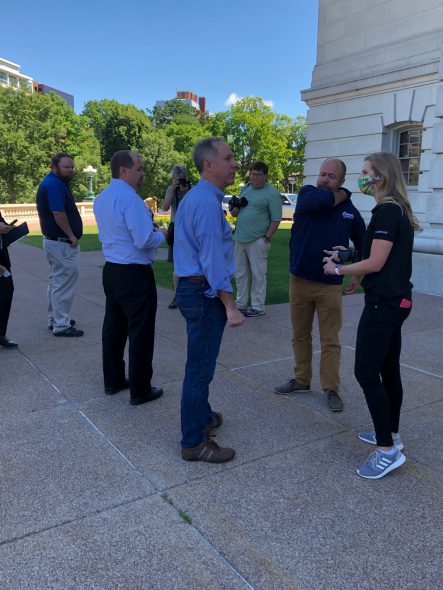 Both groups blamed Gov. Tony Evers for tensions that erupted over racial disparities and policing — but for starkly different reasons.

Assembly Speaker Robin Vos, Majority Leader Jim Steineke and Speaker Pro Tem Tyler August spoke to a large group of media mid-morning on Wednesday after graffiti had been removed, windows boarded up and the area cleaned. Vos wanted to know why Evers didn’t work with Madison Mayor Satya Rhodes-Conway to prevent the damage.

“And we see even this morning, as we walked around the Capitol and kind of surveyed the damage they had already brought in private contractors,” Vos said. “So within a matter of hours, they were able to clean the entire area up.”

“How come it didn’t happen in the first place that within a matter of hours, we’re able to deploy the police, so it never happens in the first place?” Vos asked. “That’s really where it seems like that the priorities are upside down.”

It’s fair to say that there isn’t much that the governor can do that will draw anything but criticism from his political opponents. Yet the protesters echoed the GOP leaders.

Devonere Johnson —  known by protesters as Yeshua Musa — whose arrest by police sparked last week’s violence, was having a beer with Gregg James, Jr. at the Irish Pub before Musa was arrested. Later, James was part of the crowd at the Capitol and then on a tow truck at the jail, protesting Johnson’s arrest. (Both men were arrested Friday, Johnson for allegedly extorting food from businesses and James for allegedly making threats.)

James said he doesn’t know much about politics — in fact, he asked if Evers was a Democrat or Republican. And when he heard that Republican leaders had just wrapped up a news conference at the top of the steps, he jumped up, looking eagerly in that direction until he was informed they were gone. “I knew I should have gotten here earlier,” said James.

Protesters had rocks in their pockets, according to James, but were threatened and hit by cars. He echoed the claims of other protesters that at one point, at the top of State Street, they were shot at — not by police but “by a guy in a black hoodie.” Their goal as he described it was to get Evers to get the attorney general to free Johnson and to “do what the governor in Minnesota did…take some action. Do something.”

That, he said, is why the damage targeted government property.

“Honestly, we’re not targeting other businesses,” James said. “We’re only targeting state businesses until we get Evers to do something.”

Asked again what Evers should do, James replied with what he’d heard about the governor. “I was talking to the maintenance people here who said Evers is a very quiet person.” Hearing that confirmed, he objected.

“What the f*ck? Why would you be governor? You’re not saying shit, bro, that makes it look like you’re scared. You’re not standing up for the people.”

On the point that this is not a time to be quiet, Steineke agreed, echoing that Evers should say and do more … but he was not talking about standing up for protesters, or even opening a dialogue with them, which Steineke described as “negotiating with terrorists.”

“The governor came out this morning and I appreciate the fact that he sent out a statement 10 or 11 hours later, after the fact,” Steineke said. “But just saying that he’s not going to tolerate this anymore — it’s just words. Protesters learned from weeks ago that there are no consequences to their actions … there is no direction.”

James was not the only leader among protesters who said the key goal of the events that erupted last Tuesday was freeing Yeshua Musa. They saw his arrest — which took five police officers and, according to police reports, resulted in scratches and abrasions and a trip to the hospital for medical clearance — as far different from the treatment of at least four drivers who hit protesters. 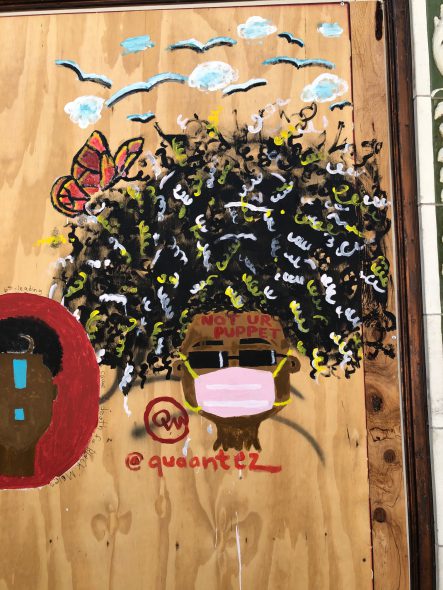 Ebony Anderson-Carter, an organizer who said she spoke for several groups, sent a statement to NBC-15 demanding Musa’s release. Other demands included that a police officer be fired and that the department be defunded with the money going to the community instead.

There is video footage of Musa entering Coopers Tavern with a bullhorn and baseball bat, antagonizing the patrons and staff and being asked to leave. However, outside of the restaurant after he left and was arrested, Madison365 reported that Johnson/Musa and the crowd repeatedly asked why he was being arrested and “officers can be heard telling witnesses that Musa had arrest warrants pending and that there are “other investigations.” When editor Robert Chapell looked into his record, he reported that “court records indicate no active criminal cases involving Musa and no active arrest warrants.” (The investigation portion of the comment could have been referencing the charges he was arrested for on Friday.)

Those were events that heightened tensions throughout the day and culminated in a night of destruction of property.

James opined that it’s clear that police just wanted to take away their leader. “They don’t like the fact that Yeshua has so much power over so many people. He could say like, go f*ck this up and like 50 people are gonna go and f*ck that up, understand?” asked James. “Every time they get that man by himself — because they know he’s a leader, they arrest him.”

Both protesters and Republican leadership asked another identical question about that night: Where were the police?

James’ tone when he talked about the lack of a police presence made it clear he took it as a badge of honor that proved that the protesters were in control.

“Why does Evers just want to threaten us with the National Guard? That shit doesn’t scare us,” he said. “I’m pretty sure he realized that last night we were standing our ground. We made the police leave before we did. That tells you who’s really in control.”

The day after the incident and the Republicans’ criticism, Evers called up the National Guard. It was something some Republicans — including former Gov. Scott Walker — had called for  (although Walker tweeted that Evers should call in the Guard  the day after Evers had already done so).

Speaking a few days after the protests that got violent, another participant, who asked his name not be used, said that the group had heard about the Guard being called up and that — perhaps along with the way things had unfolded Tuesday into Wednesday — made the protesters wary, and may have changed their plans to return the following nights. But all protesters interviewed say it’s not over.

The anonymous protester described a night of increasing tension among the group of about 100-150. They were handed little slips of paper with information including an  ACLU phone number, bail information and what to do if they got arrested. They were then instructed to put on any protective gear. Rumors came from people with police scanners that a band of police in riot gear was nearby.

“I felt a dominant narrative of Tuesday was that we were protesting in response to the violent arrest of Yeshua,” said another protester, a man of color in his early 20s who asked to remain anonymous. But he described the damage to the Capitol as pushback not only on “a system that oppresses Black, brown and poor people in this country,” but also at Madison in particular.

“One way that I have come to understand the motivations is that Dane County is one of the worst places in the U.S. for Black people to live in terms of educational achievement, arrest rates, homelessness, child poverty, unemployment. The numbers are well above the average nationally for Black people. And I think our conception of our city as this liberal progressive place doesn’t really fit with the reality of numbers,” he explained.

“And so, while I didn’t personally help take down the statues, I understand why people wanted to because those are the symbols of this sort of fake liberalism that we have. This idea of our city being so progressive, so positive, yet it has some of the worst inequalities in the country.”

One goal he said the protests have already achieved is a reconsideration of having police officers in the Madison schools — a fight that has been going on for years. The Madison School Board is expected to vote to end the relationship on Monday.

Republican leaders and the protesters have distinctly opposite goals when it comes to policy solutions to address the issues that continue to bring marchers to the streets. While both may fault Evers, many of the things that the protesters want to see happen would require legislative action.

Since Evers took office, Republicans have sought to undermine his authority, starting with the lame-duck session after his election. They have refused to come into special sessions on a list of topics, including gun safety and education, when he has called them — one of the things a governor is allowed to do. The Legislature gavelled in and out or ignored the order altogether.

More recently, Republicans in the Legislature have used the Supreme Court and hired private attorneys at public expense to take Evers’ actions directly to the conservative-dominated Court to stop him, be it from ordering mail-in elections or extending a Safer at Home order using his executive powers. There is irony in their cries that he must act.

Evers has said that the Legislature needs to pass something that both sides contribute to and both sides will vote for and, if that happens, Evers has made it clear he is extremely likely to sign any bipartisan legislation.

The Legislative Black Caucus had called for a special session on Juneteenth to talk up bills for police reform and racial justice. Evers did not call the session — saying he did not want such an important topic to end in another standoff with no action. (Evers spokesperson did not respond to a request for comment on the destruction or any reply to the GOP leaders’ news conference.)

Vos has spoken with Black Caucus leaders Rep. LaKeshia Myers about addressing some of these issues. And before Vos spoke with reporters the morning after the night of destruction around the Capitol, he also had a phone conversation with Black pastors from across the state.

Presumably that holds true when it comes to addressing injustice with corrective policy. Even if that job title happens to be Assembly Speaker.