Would we honor Japanese Admiral Yamamoto, who led the attack on Pearl Harbor? 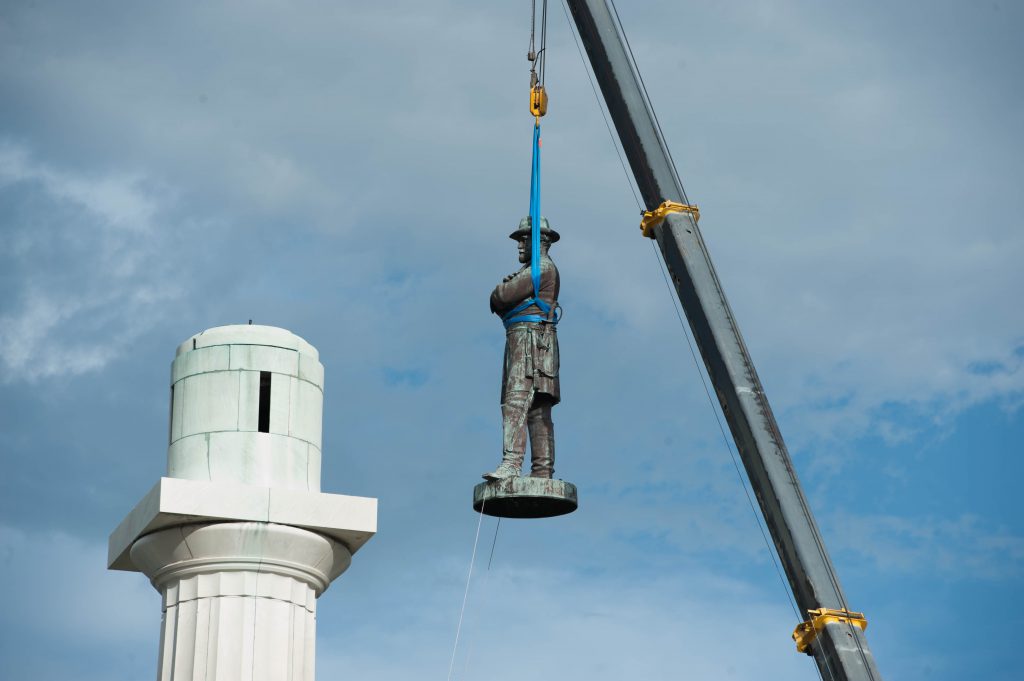 Confederate monument to Robert E. Lee is removed from its perch on May 17, 2017. Photo by Abdazizar  (CC BY-SA).

Symbols have potency. They represent what is honored in society. Continuing to celebrate the army that fought to preserve the brutal system of enslavement sends a message that unequal treatment of African Americans is acceptable. As James Grossman, the director of the American Historical Association put it, “Those statues legitimate racism. They legitimate violence against Black people, because slavery was a system of violence against Black people.”

Monuments of Confederate leaders and the Confederate flag are symbols of white supremacy. It’s no coincidence that many of those monuments were erected during imposition of Jim Crow laws in the late 19th century. More recently, the confederate flag was adopted as a symbol of opposition to the civil rights movement.

If we Americans, as a society, are truly going to fight racism, then flying the Confederate flag and allowing statutes of Confederate leaders to remain in places of honor must no longer be tolerated.

Confederate apologists attempt to rewrite the history of the Civil War. Make no mistake: the purpose of the Confederacy was to continue enslavement. The resolution adopted by the state of Mississippi to justify taking up arms against the United States reads, in part, “Our position is thoroughly identified with the institution of slavery … A blow at slavery is a blow at commerce and civilization.” Other Confederate states expressed similar reasons for declaring war on our national union. Texas asserted, “The servitude of the African race, as existing in these States, is mutually beneficial to both bond and free, and is abundantly authorized and justified by the experience of mankind, and the revealed will of the Almighty Creator.” And in Louisiana, “The formation of a Southern confederacy is to preserve the blessings of African slavery. … The people of the slaveholding States are bound together by the same necessity and determination to preserve African slavery.”

Southern politicians have justified the flying of the Confederate flag (which is still a part of the state flag of Mississippi) by saying, for example, “the flag stands for traditions that are noble.” How would we react if a state in Germany flew the swastika at their Parliament building as a way of “honoring their noble traditions”?

To their credit, both the Navy and Marines have now banned the display of the Confederate flag. However, Army bases continue to bear the name of Confederate Generals including Fort Bragg, Fort Benning and Fort Gordon, named after John Brown Gordon, the head of the Ku Klux Klan in Georgia. An Army spokesperson rationalized that the “Army has a tradition of naming installations for historical figures of military significance.” Japanese Admiral Isoroku Yamamoto led the attack on Pearl Harbor and is certainly of historical significance. Is the military going to name a base after him?

Wisconsin has a proud Civil War history. Almost 100,000 Badgers fought with the Grand Army of the Republic to preserve the United States and to end the brutal regime of enslavement. 12,216 brave Wisconsinites perished in that fight. Flying the Confederate flag dishonors their sacred memory.

One thought on “Op Ed: Why Honor Confederate Leaders?”