City flies flag for the first time as county and state follow suit. 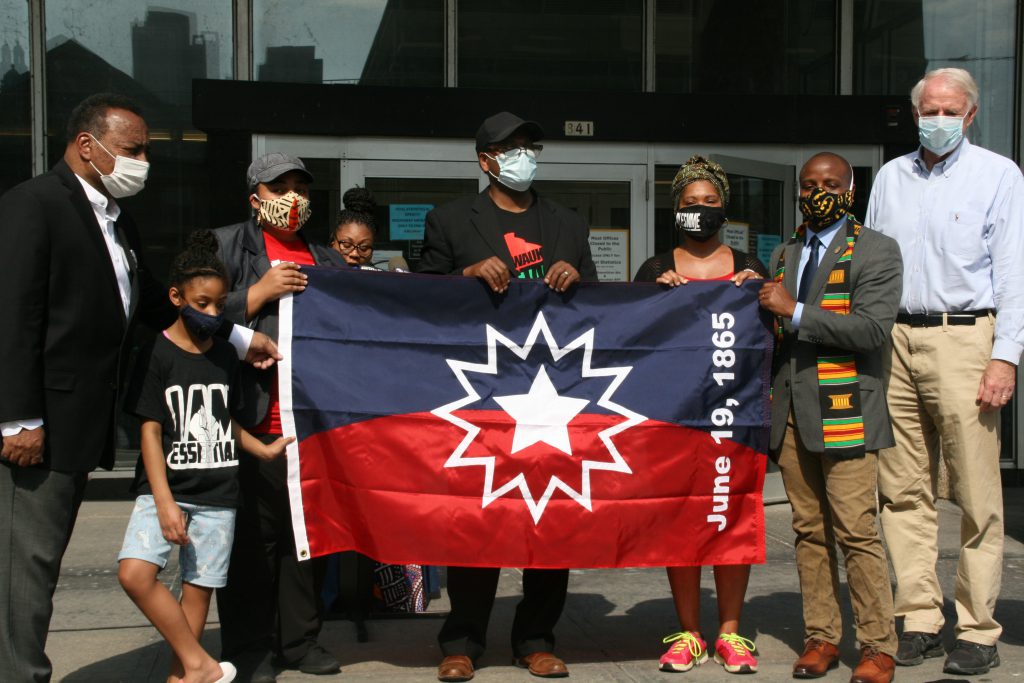 The Juneteenth flag, a blue-and-red flag with two stars, is flying over the Milwaukee’s Zeidler Municipal Building, 841 N. Broadway, at the City Hall complex for the first time.

The annual holiday marks when federal troops ordered the remaining slaves held in the state of Texas to be released on June 19th, 1865. The announcement came over two years after President Abraham Lincoln issued the Emancipation Proclamation legally freeing the slaves.

A ceremony marking the flag’s raising was emceed by Alderwoman Chantia Lewis.

“I am just bursting with joy,” said Lewis in an interview after the event. “Everyday we’re just thinking about what we can do to continue the conversation and help the public.” She said she was surprised to learn there was a flag, but was happy the event could serve as a stand-in for the 49th annual parade that was canceled because of the pandemic.

The holiday marks when federal troops ordered the remaining slaves held in the state of Texas to be released on June 19th, 1865. The announcement came over two years after President Abraham Lincoln issued the Emancipation Proclamation legally freeing the slaves.

“Nobody does Juneteenth like Wisconsin,” said City Treasurer Spencer Coggs. “We have the biggest, we have the best [event].” Led by the Northcott Neighborhood House, the city has one of the longest-running Juneteenth celebrations.

In 2009, as a state senator, Coggs co-authored a bill with Senator Lena Taylor for the State of Wisconsin to recognize the holiday. The city passed legislation recognizing the holiday in 2004.

Coggs’ niece, Alderwoman Milele A. Coggs, also spoke at the ceremony. The parade and festival take place in her district and Coggs is leading the painting of a “Black Lives Matter” community mural in place of the normally-scheduled parade.

But other council remembers raised the specter that progress needs to be made to recognize that.

“It is a reminder to all of us that we have not reached our creed,” said Alderman Ashanti Hamilton.

Council President Cavalier Johnson said it’s important to remember that America saw 246 years of slavery and is now only 155 years removed from slavery. “We are not terribly far removed from terrible atrocities to people of color,” said Johnson.

“I don’t feel like we have to reach another generation to reach these lofty goals,” said Hamilton. Johnson said if people continued to fight for justice like they were today the goal was attainable.

“I think the question everyone is asking is are African Americans in this country free?” said Mayor Tom Barrett. He said dispairities, including the spread of COVID-19 in Milwaukee, show that more work remains for justice. “Every one of us has to do better.”

“There is so much more we can be doing,” said Lewis, citing working for equality, ending food deserts and other social justice initiatives.

Nikki Purvis, director of the Office of Small Business Development, sang “the black national anthem” a song entitled “Lift Every Voice and Sing” before the flag was raised up just below the United States of America flag.

Lewis said she hopes next year, with more planning and a bigger flag, that the Juneteenth flag can fly over the adjacent City Hall building.

The corner of N. Broadway and E. Kilbourn Ave. isn’t the only spot you’ll find the flag. Milwaukee County Executive David Crowley ordered the flag raised in front of the south entrance to the Milwaukee County Courthouse. It’s joined by the American flag, Pan-African flag and Rainbow Pridge flag.

“These flags will remain in place year round as they represent a collective history of injustices against Black and LGBTQ+ people in this country and provide a sense of hope for a better future,” said Crowley in a statement announcing the flag raising.

The Wisconsin State Capitol also is flying the flag on June 19th under the order of Governor Tony Evers and Lieutenant Governor Mandela Barnes.

The flag was created under the direction of National Juneteenth Observation Foundation founder Ben Haith in 1997 and updated in 2000. The star in the middle of the flag represents Texas, the Lone Star state, and the freedom of all African Americans. The bursting star surrounding the star represents a “nova,” a term for a new star or new beginning. The arc in the flag represents a horizon for justice. The red, white and blue colors are a reference to the United States flag. 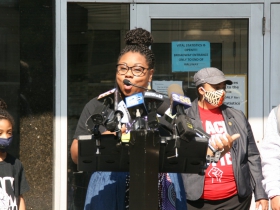 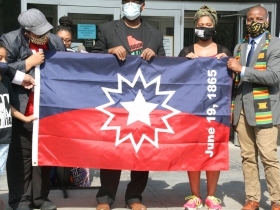 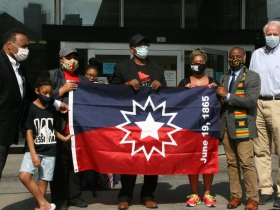 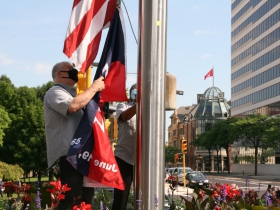 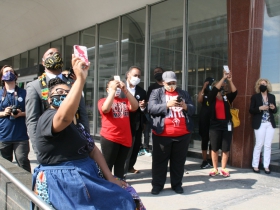 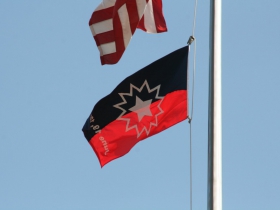