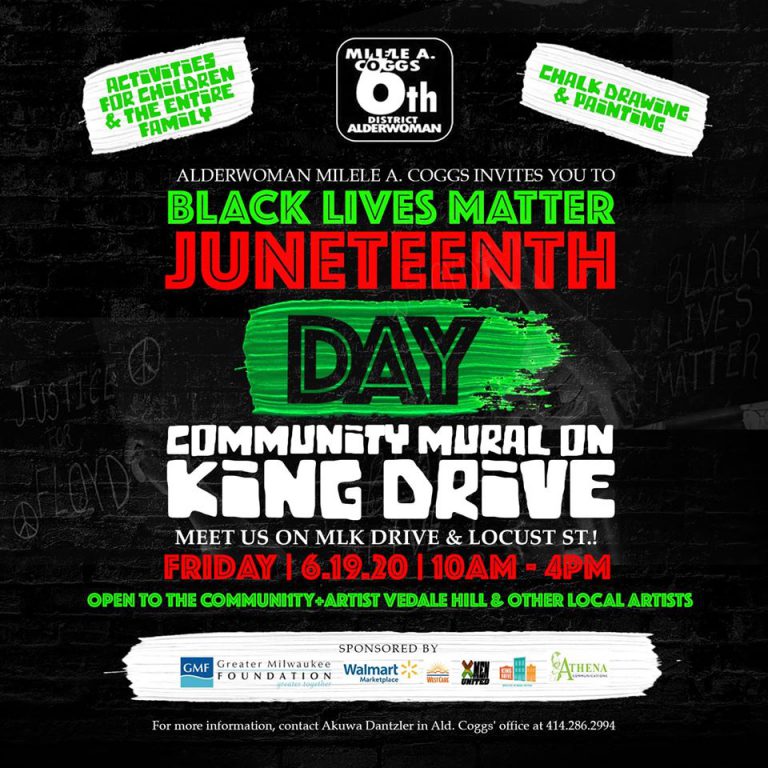 COVID-19 has canceled the 49th annual parade, but a new art installation will take its place.

Led by Harambee-based artist Vedale Hill, “Black Lives Matter” will be written on the street near King Drive’s intersection with W. Locust St.

The location, adjacent to the Milwaukee Police Department‘s district five station, has served as the epicenter of the protests stemming from the killing of George Floyd by a Minneapolis police officer.

The art installation follows a trend that started just outside the White House in Washington D.C. on June 5th. Mayor Muriel Bowser renamed two blocks of 16th Street NW to Black Lives Matter Plaza and had 35-foot-tall, yellow letters spelling out “BLACK LIVES MATTER” painted on the street. Activists added “Defund the Police” to the end of the mural the next day.

Over a dozen other cities followed suit including Oakland, California and Charlotte, North Carolina. In Madison, “DEFUND THE POLICE,” a slogan calling for reallocation of resources towards public health, was painted on a street leading to the Wisconsin State Capitol. Forbes published an article with images of many of the installations.

Members of the community are invited to participate in the event, which will last from 10 am. until 4 p.m. on Friday.

“Bring the whole family. See you there!” wrote Alderwoman Milele A. Coggs in announcing the proposal. The alderwoman has introduced or sponsored a number of proposals since the protest movement started including holding the appointment of department heads until plans for racial justice on presented, requesting a model a 10 percent budget reallocation from the Milwaukee Police Department, calling for fully funding the Office of African American Affairs, calling for an “I Can’t Breathe” policy to be adopted by the Fire & Police Commission, requesting a state law change stop the requirement the city to pay officers suspended with pending felony charges and calling for the federal government to recognize Juneteenth Day as a federal holiday.

This is a giant “BLACK LIVES MATTER" banner captured last Sunday by KOMPSAT-3A. It is painted on the road to the White House and the police in D.C. in the USA. The section is changed to "Black Lives Matter Plaza," with a new street sign.#BlackLivesMatter pic.twitter.com/cv0sQHsbny