Activists, Alders, lawmakers and the governor are calling for policy changes.

By Isiah Holmes, Wisconsin Examiner - Jun 5th, 2020 01:21 pm
Get a daily rundown of the top stories on Urban Milwaukee 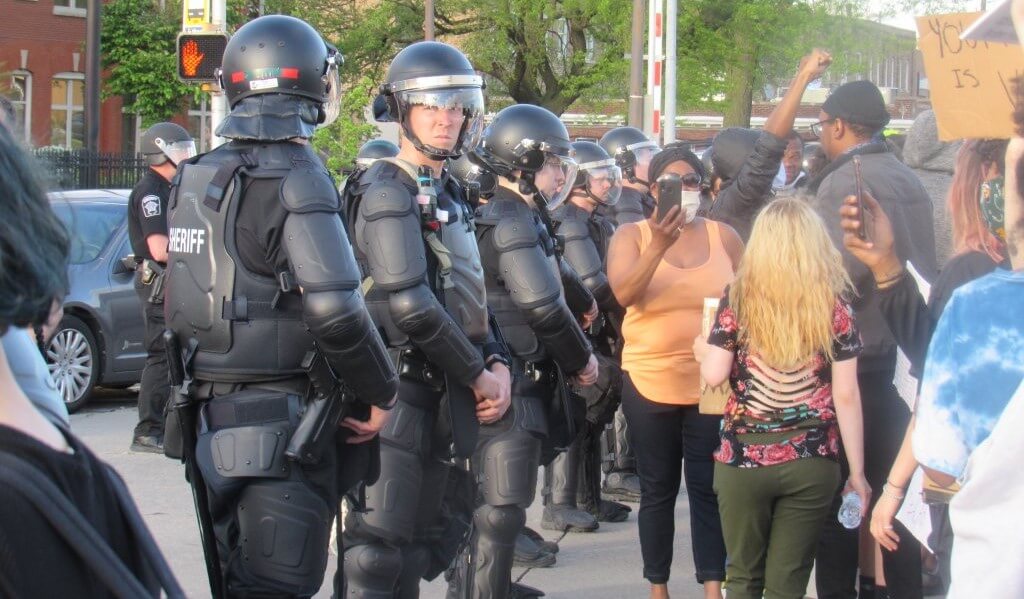 Many people across Milwaukee are still processing clashes between protesters and law enforcement this week. Although a curfew is no longer in effect, officers have maintained an augmented presence throughout the area. In the most prominent standoff, a day-time march was declared unlawful by Milwaukee police, who used tear gas on the crowd, and detained some protesters.

On June 2, a march was dispersed after what the Milwaukee Police Department (MPD) claims was a Molotov cocktail was thrown at personnel. The reports have been widely disputed, from protesters who were there and by city officials and alders. Dist. 3 Ald. Nik Kovac said on social media that he was  gathering details from neighbors and constituents about what happened.

Based on what he had seen, including TMJ4’s coverage of the standoff, Kovac felt that “there was an unnecessary and unacceptable police escalation at a peaceful protest.” Calling MPD’s claims that Molotov cocktails were used “either exaggerated or baseless,” Kovac wrote, “most of the violent response from police was before the one device was thrown.”

On the same day as the incident Kovac described, Frank Nitty, a local activist and march organizer, was arrested by police as he led protesters across a bridge. Nitty was released the following day, the Milwaukee Journal Sentinel reports.

While the Common Council prepares a formal investigation into the reported Molotov cocktail incident, community organizers are drafting their own demands. The group Community Task Force (COMM FORCE) held a press conference June 4 in the shadow of MPD’s downtown headquarters. Officers had used large dumpsters to barricade the surrounding streets from traffic. At the press conference the group unveiled its own policy recommendations and highlighted frustration over the recent escalations of force by police .

“Our cities have been dying,” said African American Round Table (AART) director Markasa Tucker, who spoke at the press conference. “Our city has had a slew of divestment, no investment, and it’s showing today. It’s showing last night, it’s showing for over the six days that you’ve seen people in the streets.” Condemning the use of tear gas by police Tucker declared, “Show us the body cam video that shows there was a Molotov cocktail thrown! Show us the body cam! We’re sick and tired of being sick and tired.”

Jarrett English, a community organizer and also a member of AART, addressed those who criticize the community for protesting. “But these folks right here, they work for us,” English said, pointing behind him toward the massive police structure. “We pay them, and they murder us.” Noting MPD Chief Alfonso Morales and Milwaukee County Sheriff Earnell Lucas were supported by the community, English blasted the pair for their personnel’s conduct. “Your response,” he said, “is to allow the people under your direction to shoot bullets, rubber bullets — I don’t care what they are, they’re still bullets — tear gas, tanks, flak jackets, military gear at the children of this city?”

English and Tucker join scores of people across the state and country, now calling for de-escalation policies to be enacted in police departments. COMM FORCE released a list of demands including:

COMM FORCE also had other demands, from targeted funding initiatives to recommendations for the Office of Violence Prevention. The protests have also stirred movement on the state level. On June 2, Gov. Tony Evers called on the Legislature to pass Assembly Bill 1012, which would set use of force standards for law enforcement.

The call drew criticism from Sen. Van Wanggaard (R- Racine) who said it was, “clearly written by liberal activists who have never served with law enforcement, and apparently never even talked or listened to them.”

Wanggaard went on to say, “Gov. Evers should know that dictating to the Legislature is neither productive nor bipartisan. His tactics only serve to divide at a time we should be coming together.” Rep. Chris Taylor (D-Madison) fired back at Wanggaard calling his remarks, “cliches and out of touch inaccuracies.” Taylor noted that, in fact, AB 1012 did have input from law enforcement.

Nevertheless,  Lt. Gov. Mandela Barnes said in a statement, “we will need far more than just one bill to create a state that is truly just and equitable for all communities.” Other structural changes will be necessary, including, according to the people who organized the press conference, revamping Milwaukee’s Fire and Police Commission.

Sen. Lena Taylor (D-Milwaukee), who attended the COMM FORCE conference, argued that Milwaukee’s FPC has turned into “the puppetry of Mayor [Tom] Barrett,” with seats that remain unfilled. She decried “the fact that two of them have not been used by the mayor for more than a decade,” calling the vacancies “unacceptable.”

Lauren Cross, a local activist, advocated for a CPAC (Civilian Police Accountability Council) to be created in Milwaukee. “We did it in Chicago,” Cross told Wisconsin Examiner, “we did it in a couple other cities across the state.” Cross stresses that “we need community members to have the power to hire and fire the police.”

While the curfews are lifted, protests are continuing without cease, including large, city-wide marches and  standing protests scattered about the perimeter of Milwaukee’s suburbs. On Thursday evening, a protest marched up North Avenue and through Wauwatosa, towards Mayfair. Wauwatosa has long held a particular place in Milwaukee’s racial history, including its police department. The people, it seems, aren’t waiting for the formation of new racial equity committees or more responses from elected officials.

“This is people-led,” Vaun Mayes, a founder of COMM FORCE, said at the press conference. “We challenge the governor to call a special session, and see what happens. We call on Republicans to come to the table, and not gavel in and gavel out. People need to have a stance. You cannot be silent and you cannot not make a choice. Do you agree with police killing people for no reason? Or do you think that this is wrong?”