Milwaukee Has Many Private Streets

You may recognize them by the brown signs. That is, if you can access the road. 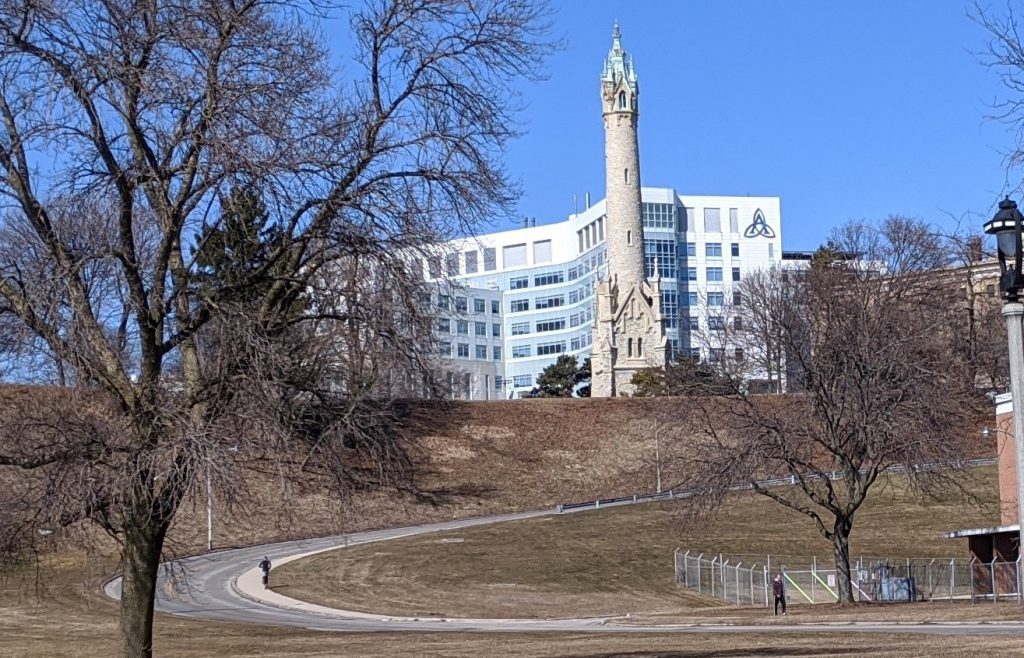 If you have driven on the hill between the North Point Water Tower and N. Lincoln Memorial Drive, you have traveled on one of the dozens of private streets in the city. Private streets are on private land and E. Water Tower Road runs through the Milwaukee Water Works property and is not a public right of way.

The street sign at the top of the hill adheres to the city’s policy on private street signs. The name “E. Water Tower Rd” is in white lettering on a brown background and includes the phrase “Private Road.” There is no similar sign at the bottom of the hill; there the sign is the standard city street sign, with white lettering on a green background. Perhaps this is because a large brown sign with the words “Private Road” would be confusing to drivers on the busy, four-lane N. Lincoln Memorial Drive.

You will find other private streets in subdivisions, on business properties, and county-owned land like Miller Park and General Mitchell International Airport. Some are little more than driveways into shopping centers and parking lots, while others, like Air Cargo Way, at over one-half mile, are longer.

There are four streets on the Miller Park grounds, which are owned by Milwaukee County. West Frederick Miller Way, N. Selig Drive, N. Yount Drive, and W. Brewers Way are names and roads that are familiar to Milwaukee Brewers fans. They are identified with brown signs that do not indicate that they are private streets but instead include a Miller Park logo. That will probably change next year when the stadium becomes American Family Field. Nearby Miller Brewing Company is the home of N. Lite Lane, N. Miller Mall, and W. High Life Place, all private streets not accessible to the public.

There are other private streets that do not follow the brown-sign mandate. The colorful sign at Manpower Place, at the Milwaukee River and W. Cherry Street, has blue lettering on a white background with the orange, green, and two shades of blue Manpower logo. Across W. Cherry Street at the south end of RiverCenter Drive, which runs through Schlitz Park, is the conventional white on green city street sign. The sign at the north end of the road, though, is also white on green but it includes the Schlitz Park logo with the words “The Best of All Worlds.”

Publicly accessible streets which follow the city guidelines on private street signs are N. Art Museum Drive, N. Edison Street along The North End apartments, and S. Jasper Avenue on E. College Avenue, which leads to a restricted area within General Mitchell International Airport. Inside the secured area are nearly a dozen private streets whose signs I cannot describe since access is restricted.

There are other private street signs that the public can only wonder about. One gated community on the Northwest Side, The Villas at Granville, has a network of lanes named for birds: dove, sandpiper, teal, warbler, dove, and hummingbird. Are the lanes identified with pictures of the birds in question? Are the signs the required white on brown? Perhaps someone familiar with that subdivision can let us know. Other restricted communities in that part of town have toney-sounding names like Lincolnshire and Presidio.

One private road is not a road at all. West Kassner Place, near the intersection of S. First Street and S. Kinnickinnic Avenue, is a sidewalk that runs between two rows of homes. In order for residents to have a mailing address, and as a destination for emergency responders, the sidewalk is named after the man who built the residences in the 1890s, Gustave Kassner. It is marked with the standard green city street sign. 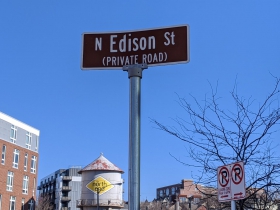 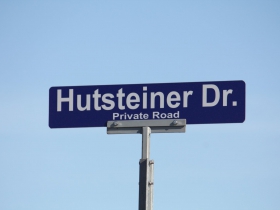 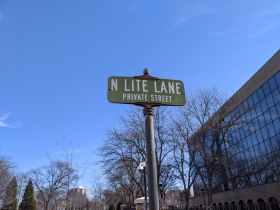 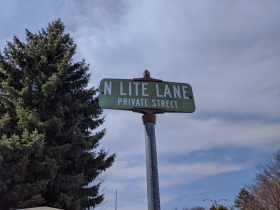 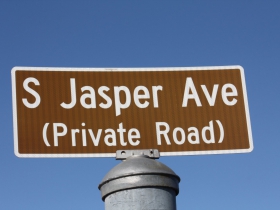 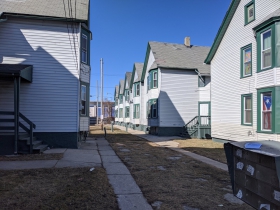 6 thoughts on “City Streets: Milwaukee Has Many Private Streets”