Aldermen Bob Donovan and Tony Zielinski attend their last council meeting and get a warm sendoff. 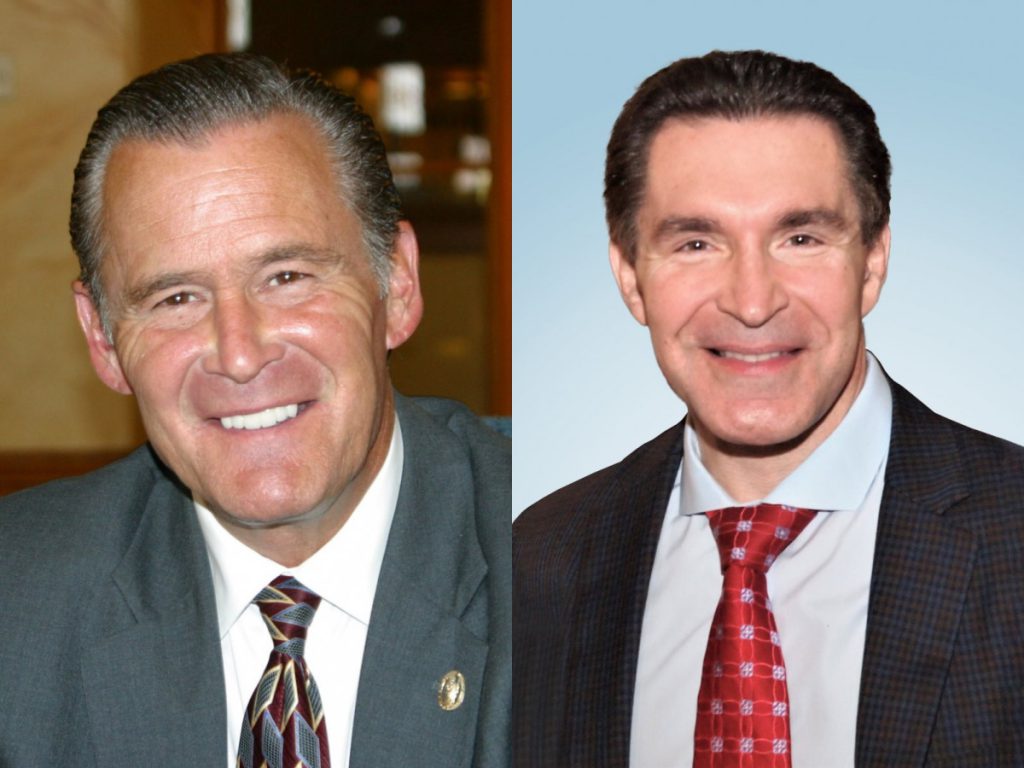 Council members Robert Donovan and Tony Zielinski. Images from the City of Milwaukee.

Tuesday morning the Milwaukee Common Council held its last meeting before newly-elected members will be seated. And with that, the 15-member body said farewell to long-time members Robert Donovan and Tony Zielinski.

Both left on their own accord, each after having taken a shot at becoming mayor. Donovan announced in March 2019 he was walking away, having run for mayor in 2016, and Zielinski announced in November 2018 it was “up or out” when he threw his hat into the ring for mayor. He finished third in the February primary.

Their colleagues praised their efforts Tuesday, albeit mostly virtually, as the council meetings have been moved online for all but three members at a time. Council President Ashanti Hamilton presented each with two plaques, memorializing their first and last piece of sponsored legislation.

“It feels like I am losing a teammate,” said Hamilton of Zielinski. The two have served together since 2004, when both were elected to the council. They have sparred in recent years, with Hamilton removing Zielinski as chair of the Licenses Committee, but Hamilton had nothing but praise for Zielinski on Tuesday.

“For me there can be no greater calling in life than public service,” said Zielinski.

“I am going to keep it short, it is all about my constituents. I never forgot about you,” he said. The Bay View alderman has held public office since 1988, first with the Milwaukee County Board of Supervisors and later with the Common Council.

“This frees up other avenues for me to achieve my ultimate long-term goal,” said Zielinski, 59, without specifying what exactly that was. “I’m still a young guy.”

Zielinski, attending via video conference, said he would rather be in public service than a surgeon, attorney or astronaut. But he will have his law degree to fall back on as he plots out what’s next.

Donovan, the chair of the Public Safety & Health Committee, drew praise from Hamilton and was handed the gavel to serve temporarily as the council president. The southside alderman joked it was the first time in 20 years someone put him in charge.

“I just wanted to take a moment to say thank you for being our chairman,” said Hamilton of Donovan’s role atop the committee. “You’ve been the public safety voice on the council for the past 20 years.”

Donovan, 64, joked that despite serving as the first chair of the retitled Public Safety & Health Committee he’s still a smoker.

“No one will ever say you have an opinion you kept to yourself,” said Hamilton.

“Thank you,” said Donovan while laughing.

Donovan was first elected in 2000 and re-elected four times since. He ran for Mayor in 2016, losing to incumbent Tom Barrett. “Fighting Bob Donovan,” as he’s known, has a reputation as an advocate for rank-and-file police officers and firefighters and a sharp critic of the administration. Hamilton praised him for fighting for “the little guy.”

“I certainly didn’t plan on going out this way, but the situation is what it is,” said Donovan of the pandemic and the passing of his mother last week.

He thanked the hundreds of people that have reached out. “I especially want to thank Mayor Barrett for his very kind and generous phone call regarding my mom,” he said.

“There are aspects of these 20 years that have passed by in the blink of an eye,” said Donovan. He said he felt it was important to be a voice for his constituents at City Hall. “I want everyone to know that I have taken that responsibility very seriously and I have tried to do my best the only way I know how.”

He praised his wife Kathy and his five children for their support. He also thanked his parents, both of whom passed away in the past two years.

He also thanked the legislative aides that have served with him, first Jill Thomas and more recently Patty Doherty.

“The only advice I’ll give to the new alderman is to choose a good, solid legislative assistant. They’re worth their weight in gold,” said Donovan. State Representative JoCasta Zamarripa won an election to replace Donovan.

Donovan thanked City Clerk Jim Owczarski and public information manager Bill Arnold. “I have certainly utilized his department, perhaps more than most,” he said of the many press releases Arnold has helped Donovan issue.

He praised department heads and city employees for their commitment. “I want to hope I wasn’t too hard on you, but I want to say Mr. President, if I was, they probably had it coming.”

Donovan finished his speech by quoting former President Teddy Roosevelt. “It is not the critic who counts; not the man who points out how the strong man stumbles, or where the doer of deeds could have done them better. The credit belongs to the man who is actually in the arena, whose face is marred by dust and sweat and blood; who strives valiantly; who errs, who comes short again and again, because there is no effort without error and shortcoming; but who does actually strive to do the deeds; who knows great enthusiasms, the great devotions; who spends himself in a worthy cause; who at the best knows in the end the triumph of high achievement, and who at the worst, if he fails, at least fails while daring greatly, so that his place shall never be with those cold and timid souls who neither know victory nor defeat,” said Roosevelt in 1910.

He thanked his colleagues for “entering the arena” and being willing to take criticism for doing what they thought was right.

The outgoing members received praise from their colleagues.

“He took me under his wing, he mentored me,” said Ald. Mark Borkowski, a fellow southside alderman. “The number of church festivals I was at with you, it was almost like rock star status.”

“Zielinski and Donovan are excellent aldermen who know their constituents,” said Ald. Russell W. Stamper, II. He said he learned the value of that from each of them. “I enjoyed the debates. I enjoyed the agreements.” He said he would miss Zielinski, who sits just to his right in the council chambers, and the ties he wears.

Alderwoman Nikiya Dodd, first elected in 2018, said she first met Donovan over a decade after graduating from college. She spent a week working with his with office on an outreach program. “Thank you for the work you’ve done and the voice you’ve had,” said Dodd.

“I remember that week. I think it was the longest week of your life,” said Donovan.

“I just want to tell Alderman Donovan, I’m going to miss him humming at the table when he was hearing something he disagreed with,” said Ald. Khalif Rainey.

“What was was that?” asked Stamper, hoping to learn what song it was.

“Oh, I have no idea. You guys drove me nuts, that’s why,” said Donovan.