Republicans proclaim vouchers for minorities while seeking ways to disenfranchise their votes.

By Ruth Conniff, Wisconsin Examiner - Jan 30th, 2020 10:24 am
Get a daily rundown of the top stories on Urban Milwaukee 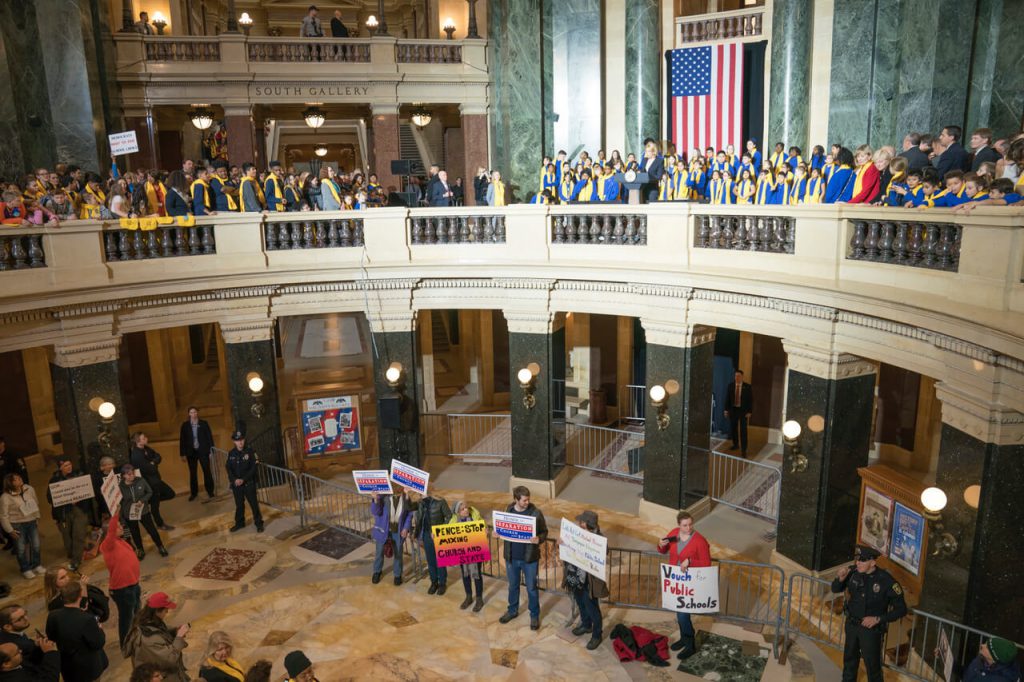 Education Secretary Betsy DeVos speaks at the Capitol in Madison, Wisconsin during School Choice Week as protesters gather in the rotunda below. Photo by Luther Wu/Wisconsin Examiner.

There was something fishy about the whole spectacle at the Capitol on Tuesday, as Vice President Mike Pence and Secretary of Education Betsy DeVos parachuted in to praise Wisconsin as “the birthplace of education freedom.”

Surrounded by cute kids in bright-yellow School Choice Week scarves who sang hymns, drummed, danced and recited the Pledge of Allegiance, Pence, DeVos and Wisconsin’s GOP leaders expounded on the many ways the state’s controversial, first-in-the-nation private school voucher program has improved the lives of low-income black and brown children.

“Whether or not you receive a quality education should not depend on your zip code,” intoned Republican Senate Majority Leader Scott Fitzgerald, sounding like Democratic Lt. Gov. Mandela Barnes, who, along with Gov. Tony Evers, skipped the whole affair.

Barnes, Wisconsin’s first black lieutenant governor, often talks about growing up in Milwaukee, in the 53206 zip code, which has been deemed the city’s poorest and the nation’s worst zip code for mass incarceration of black men. “A person’s zip code should never determine their destiny” was one of Barnes’ applause lines during the 2018 campaign and in his inauguration speech.

Standing on the same spot where Barnes and Evers were sworn in while surrounded by public school children, Republican private-school boosters repeatedly hit on the same social-justice themes.

“Education shouldn’t be determined by luck or address or by family income,” said DeVos.

Education “should not be up to bureaucrats or a student’s zip code or their income,” agreed Pence, who dwelled on the successes of black and Hispanic students through private school vouchers.

“Why should anyone believe them when they consistently leave children behind when it comes to poverty?” said Barnes, who was reached for comment while traveling outside of Madison. “Why haven’t they expanded BadgerCare so that more families get the health care they deserve? Why haven’t they done anything to protect them from gun violence?”

Indeed, the school-choice rally at the Capitol had a strangely dissonant quality. When else do you ever hear so many rightwing conservatives spend so much time talking about the needs and aspirations of kids of color?

The history of private school vouchers in Wisconsin does include high-profile African American and Latino advocates. And there are plenty of people of color who support school choice. The late Polly Williams, an African American Democrat from Milwaukee, helped create the original Milwaukee voucher experiment along with then-Gov. Tommy Thompson, a Republican (and the “father of educational freedom” according to Mike Pence). But the landscape has changed as the voucher system has expanded statewide. And the money and power behind the school-privatization movement is notably attached to rightwing Republicans who, as Barnes said, are not champions of civil rights or racial and economic justice.

DeVos’s American Federation for Children, which has spent millions of dollars on issue ads to help elect pro-privatization candidates in states across the country, has made Wisconsin a top target. The group’s 2012 “Election Impact Report” detailed its $2,392,000 in spending in the state and its successes defending then-Gov. Scott Walker in his recall election, as well as helping to ensure Republican control of both houses of the Legislature. The report featured pictures of the victorious white legislators interspersed with decorative photos of smiling black and brown children.

DeVos was back to survey her handiwork on Tuesday.

The connections between the powerful school choice lobby and the Republican takeover of Wisconsin run deep.

Take Hispanics for School Choice, the group that organized the Wisconsin School Choice Student Showcase that brought Pence and DeVos to the Capitol.

The group’s founder, Jesús “Zeus” Rodriguez, gave a deposition in a 2012 redistricting lawsuit explaining how he helped to draw the Republican legislature’s gerrymandered maps in 2011. Rodriguez was friends with Scott Jensen, the former Assembly speaker, now a powerful lobbyist for DeVos’  American Federation for Children.

Jensen sent Rodriguez drafts of maps of Assembly districts eight and nine in Milwaukee. “Zeus, here’s an alternative map for the two Hispanic districts,” Jensen wrote in one email. “The original map can be found at the state link below.”

Rodriguez, who knew Jensen through his school choice work, was connected with top Republicans, including Joe Handrick, and sent “heat maps” to redraw districts in Milwaukee.

“You were basically given a choice to within those boundaries help design the Latino community as you best — you personally best thought it should be, correct?” an attorney asked Rodriguez during the deposition.

Rodriguez advised Republicans on how best to draw maps that he said protected the interests of the Latino community. But a federal judge found the maps noncompliant with the Voting Rights Act because of their diminishing impact on Latino voting power in Milwaukee.

Perhaps the biggest overlap between the school-privatization lobby and the effort to tilt elections to benefit Republicans in Wisconsin is centered at the Wisconsin Institute for Law & Liberty (WILL), which has been deeply involved in both causes.

WILL, which is suing to force the State Elections Commission to purge 204,000 voters from the rolls, put out a report this week touting what it labeled the benefits of expanding Wisconsin’s school choice programs.

The report claims that students in the Milwaukee Parental Choice Program are 38% more likely to have graduated from a four-year college than their public-school peers.

Extrapolating from that figure, it projects that over the next 20 years, if enrollment in the statewide voucher program increases so that 20% of Wisconsin students are using public funds to attend private schools, there will be 9,044 more college graduates who will add $3.2 billion to the state’s economy.

“I call this one the ‘build it and they will come’ report,” says William Mathis, the managing director of the National Education Policy Center at the University of Colorado Boulder. “By increasing the number of slots they are assuming they will get people to come and then get certain jobs with a certain salary. It’s all assumptions.”

Mathis has published reviews of several WILL papers for NEPC. The group’s mission is “to produce and disseminate high-quality, peer-reviewed research to inform education policy discussions.” He is underwhelmed by WILL’s research.

“They make an assumption and multiply it by a speculation,” he says. “There’s not real statistical research and analysis. It’s the kind of thing you might do on the back of a napkin at the local diner.”

The big problem with the WILL report, “Ripple Effect: How expanding Wisconsin’s school choice program can lead to more college graduates and a stronger economy,” says Mathis, is that “It doesn’t solve the problem of openings in the labor market or the economic problems of children who want to go to college,” he points out.

As for the higher rates of college attendance by voucher and charter-school students, Mathis says, “there’s a huge selection effect.” Not only do these schools “counsel out” kids who underperform, leaving a graduating class with only the highest performing students, parents who are jockeying to get their kids into private school are also more likely to help push them to get into college.

Across the country, there is little evidence that private school choice programs yield better results for children.

Which raises the question: why privatize our state’s public school system?

Perhaps the most notable aspect of the WILL report is its projection of a massive expansion of private-school vouchers, as enrollment and income caps come off:

“We assume that choice enrollment continues to grow statewide to 20% of enrollment over the next 20 years,” the report states.

In other words, one in five Wisconsin children will be using public-school taxpayer funds to attend private school.

“Roadblocks” to the statewide voucher expansion will “decrease in coming years,” the report notes cheerfully, “chief among them the enrollment cap.” Currently, only 4% of students in a given school district can take vouchers. That number is set to increase by 1% each year, until it reaches 10%, when the cap disappears entirely. 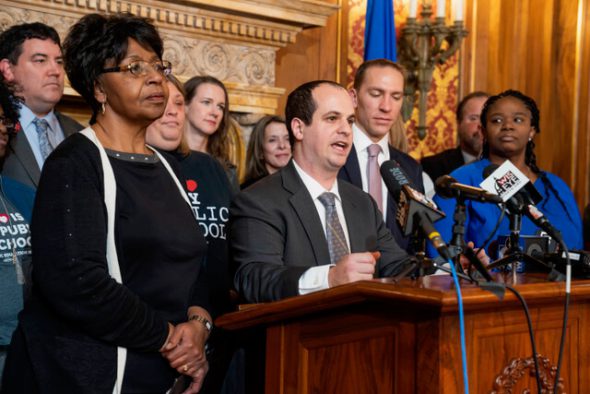 “Years of research have shown that voucher programs siphon significant amounts of money away from public school districts while performing at the same level or worse than traditional public schools, contrary to the promises made by school voucher advocates,” Brostoff said.

Pence referred to the effort in his speech, declaring “We’re not going to let that happen!”

Indeed, Brostoff’s bill has little chance of coming up in the Republican dominated state legislature.

“It’s tough in this particular snapshot of our state history, because of the extreme gerrymandering and the interests that, you know, bought and paid for a bunch of politicians,” Brostoff says. But politics can change quickly, he adds. “It’s a grind. You have to do it. You have to push it. It’s not going to come without hard work, but it’s definitely doable.”

Marva Herndon, a school board member in Milwaukee, who has worked to get the word out about shady voucher operators in Milwaukee for years, spoke in favor of Brostoff’s bill.

“Milwaukee has endured this travesty for for 30 years,” she said of the voucher expansion. Public-school budgets have been shrinking, she noted, as property tax payers paid $156.4 million over the last four years to underwrite private schools.

Charter and voucher school advocates, Herndon said, “claim they are the saviors of these poor black and brown children–saving them from poorly performing public schools. Oh really? Look what they are saving,” she said, reeling off the millions per year taxpayers are putting into private school.

In Herndon’s view, the politics of school privatization have changed, and people are less credulous.

The path forward, she says, is to “vote like hell” and to keep doing what she’s been doing for the past decade: “trying to explain to the communities and explain to the parents that voucher schools and charter schools are not free. They come with a cost. “In Milwaukee, the drain on resources means “we won’t be able to survive,” she adds.

Community work is what will ultimately change things, Herndon says.

As Barnes sees it, when school privatization proponents steal his line about kids’ zip codes not determining their destiny they have no idea what they are describing. because, to them, “the zip codes are just numbers on a stat sheet. Not any place they would ever visit, spend time or make real connections.”

If they did that, maybe they would realize, as Barnes says, “taking money from public schools is not social justice.”