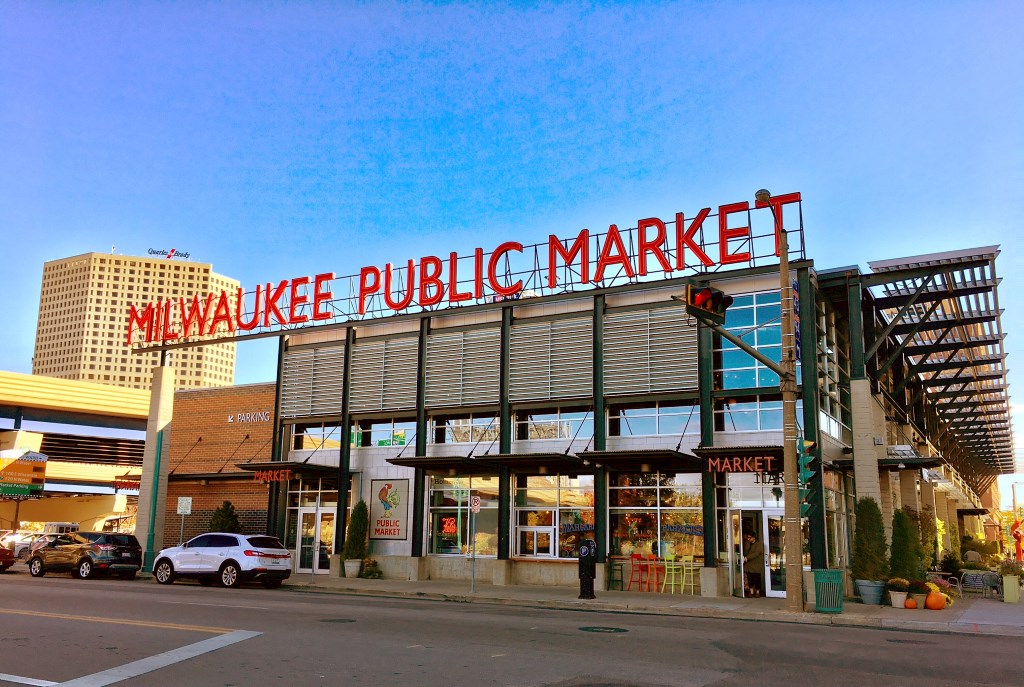 Milwaukee Public Market.The Milwaukee Public Market is a runaway success story. Sales are up, visits are up, media exposure is through the roof. In addition to being seen by thousands of drivers daily, its large sign is regularly used in movies, such as Bridesmaids, and on television, including any nationally televised Milwaukee Bucks game, to establish to viewers that you’re looking at Milwaukee.

It’s becoming the symbol of the city.

“What’s been remarkable is how many people we are attracting from outside the region while also maintaining a local customer base from throughout the Milwaukee metro area,” said market Executive Director Paul Schwartz in a press release announcing the news.  “Public markets are viewed nationally as a hotbed of social, cultural and culinary placemaking, and I’d like to think we’re delivering that here in Milwaukee.”

But what’s actually fueling that growth? “I’d be hard pressed to attribute it to any one thing,” said Schwartz in an interview. But he has plenty of ideas.

The market, owned by the Historic Third Ward business improvement district (BID), opened in 2005 and wasn’t an immediate success, with many vendors turning over in the early years. But its tenant mix is now stable and the market is seeking ways to fit even more in.

In fact, finding a way to incorporate even more vendors into the mix is one of the things Schwartz credits. “We’re not afraid to dream and think outside the box,” said Schwartz. “Case in point, when Draft & Vessel approached me about a year ago about being in the market, I told him we don’t have space inside, but I admired what they had done in Shorewood. So we met and brainstormed possibilities. I’ve been wanting to activate the outside spaces around the market more and more. The end result was the Draft Patio.” The patio is a beer garden set up with a classic truck along E. St. Paul Ave.

Schwartz told Urban Milwaukee the tenant mix is better than its ever been and the vendors’ dedication to their products is noticed by customers.

The Hop, Milwaukee’s streetcar system that is exceeding ridership expectations, is also a factor in the market’s growth.

Foltz Family Market co-owner Casey Foltz credits the streetcar as a strong driver of the growth. “As a vendor in the public market, I can say that we definitely saw an uptick last year directly related to The Hop,” wrote Foltz on Facebook this week. His business has grown by 24 percent, which he calculated generated an additional $48,356 in sales and employment tax revenue in 2019.

The Milwaukee Public Market has also benefitted from the growth of the neighborhood. New apartment buildings have opened in the neighborhood in recent years as well as a new hotel and a host of new retailers. An influx of chains, including everything from Shake Shack to Verizon, hasn’t dampened the draw of the independent vendors in the market.

“The Third Ward neighborhood has seen some exciting developments in recent years. And more developments will become realized in the next couple years which will only help make the Market stronger,” said Schwartz. He also said the market benefits from strong partnerships with the City and VISIT Milwaukee.

Schwartz also praised his staff. “Our operating principles are Common Sense, Sense of Humor, Organized Chaos,” said the executive director, crediting BID board member Ron San Felippo for their origination. “We have a top-notch team from private events, to marketing, to facility and maintenance.  And many of them have been here for over eight years, so they have an understanding of what works and what doesn’t.”