Poll shows a culture of denial among Wisconsin Trump supporters.

How do Republicans handle the July 25th telephone conversation between President Trump and President Zelensky of Ukraine, in which Trump asked for an investigation of Joe Biden, his possible rival in the 2020 election? If the roles were reversed—if a Democratic president asked a foreign leader for dirt on a potential Republican rival, is there any doubt that Republicans would be demanding impeachment or prosecution for treason?

One strategy is to attack the process. This strategy has been adopted by most Republican members of Congress, and is well illustrated by Rep. Jim Sensenbrenner’s recent New York Times column attacking the Trump impeachment. In his column, Sensenbrenner is careful to ignore the charges in the articles of impeachment.

A second is to deny the evidence or its importance. This requires some contortions, as illustrated by the responses made by Wisconsin Republican voters to a series of questions in the most recent Marquette Law School poll, concerning Trump’s actions related to Ukraine.

Early on in his conversation with Trump, Zelensky brings up American aid for Ukraine’s defense:

I would also like to thank you for your great support in the area of defense. We. are ready to continue to cooperate for the next steps. Specifically, we are almost ready to buy more Javelins from the United States for defense purposes.

Clearly, he hopes that Trump will respond by assuring him that the aid is on the way. Instead, this is the last—and only—mention of defense aid or Javelins in the conversation. Instead, Trump immediately turns the conversation towards investigations. He asks for a “favor”:

I would like you to do us a favor though because our country has been through a lot and Ukraine knows a lot about it. I would like you to find out what happened with this whole situation with Ukraine, they say Crowdstrike … I guess you have one of your wealthy people… The server, they say Ukraine has it.

This seems to be a referral to a theory promoted by the Russians and popular among some of the right that Ukraine, rather than Russia, interfered in the 2016 election and in favor of Hillary Clinton, rather than Trump.

Later, Trump asked for a second investigation, of Joe Biden.

A sequence of four questions on the most recent Marquette Law School poll asked about Trump’s actions related to Ukraine. The referenced this requested Biden investigation. It asked, “To the best of your knowledge, did Donald Trump ask the Ukrainian president to investigate his political rivals?” Some 59 percent of Republicans of Wisconsin registered voters answered “no.”

The next question asked whether there was a tie to military aid: “To the best of your knowledge, did Donald Trump hold up military aid to pressure the Ukrainian president to investigate his political rivals?” And 69 percent answered “no.” Thus it appears that the extra 10 percent of Republicans believed Trump asked for an investigation of his rivals, but did not withhold military aid to pressure Zelensky. But news reports show the hold was established shortly before the phone call and became official that evening.

The fourth question asked, “Do Trump’s actions mean he should be impeached and removed from office? As the next chart shows, an overwhelming 94 percent say he should not be. The next graph summarizes the sequence. A majority of Republicans reject the notion that Trump wanted an investigation of Biden. Of the remainder, 10 percent rejected the connection to military aid. More either saw nothing wrong or not seriously wrong. 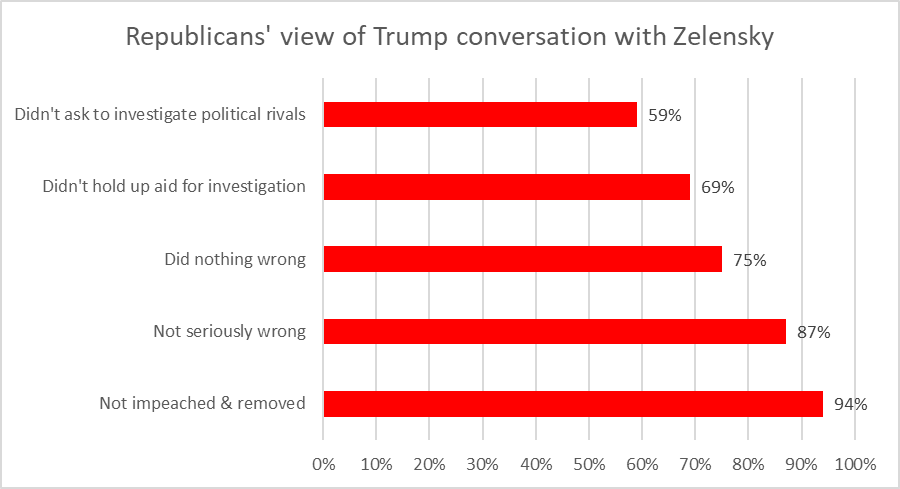 By contrast, Democrats are remarkably consistent: 83 percent answered in the affirmative when asked if Trump wanted Ukraine to investigate his rivals, whether he used aid as leverage, and whether he did anything wrong. And 80 percent advocated his impeachment and removal from office. (A small number volunteered that Trump should be impeached but not removed from office.)

This sequence of questions throws light, I think, on why Republican members of Congress, have opted to attack the impeachment process, rather than defend Trump’s actions. To defend them as “perfect” demands too many jumps in logic as well as wishing away Trump’s language, opaque as it often is. To attack the process presents far fewer challenges.