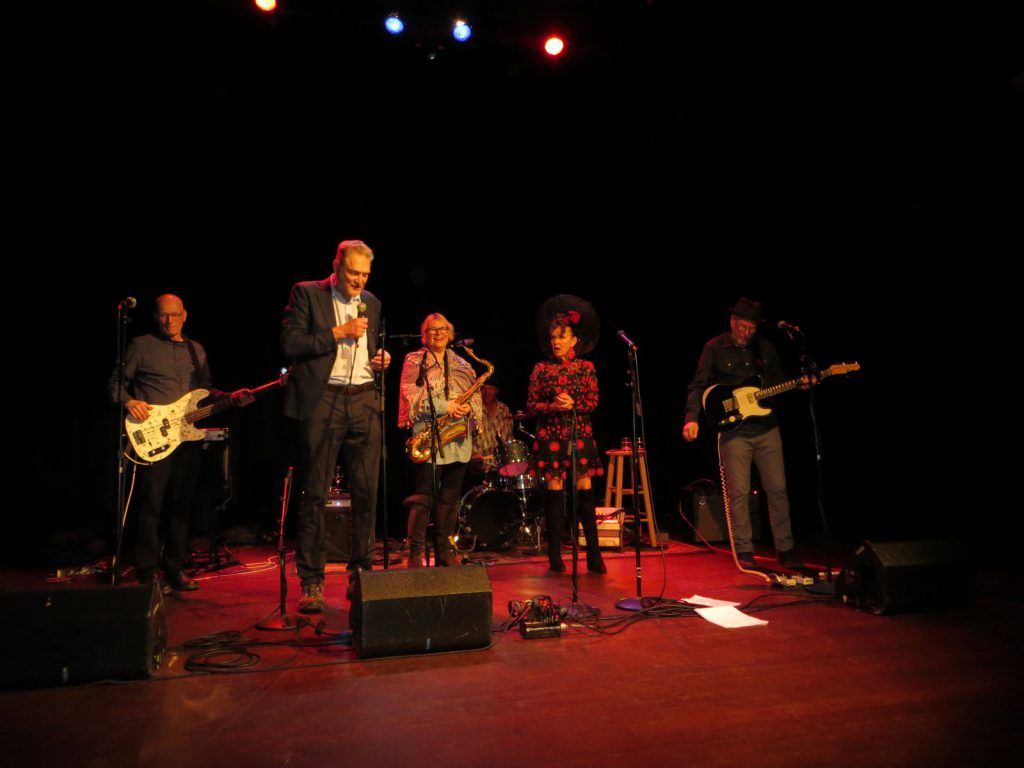 John Norquist served 15 years as Milwaukee’s 37th mayor (1988-2004), after 13 years in the Wisconsin Legislature and has spent the last 15 in Chicago, where he served a decade as the head of the Congress for the New Urbanism. His very urbanist views of how to run a city were and continue to be a major influence on Milwaukee, and he was able to draw a large contingent from Brew City to the Windy City to attend his 70th birthday party Friday, November 15th.

The party was held at Mayne Stage, a 1912 movie theater with a 1930s Art Deco update that has been painstakingly and expensively renovated as an event space. It is one of the many projects in Norquist’s Rogers Park neighborhood owned and operated by Jennifer Pritzker. (An heir to the Hyatt Hotel fortune, Pritzker also has the distinction of being the world’s first transgender billionaire. Beat that!)

“It’s a Milwaukee reunion,” I marveled, drawing a response from one participant, who said: “Yes, Milwaukee in the ’80s.”

As guests arrived, they entered a corridor lined with a number of displays from Norquist’s life and career, including his baby pictures, his Cub Scout kerchief, and campaign material from his state Senate and mayoral races. All were presumably collected, collated and organized by his wife Susan Mudd, who greeted guests at the door, dressed in tights and a red-and-white dress, boldly patterned. Mudd served for years as the head of Milwaukee’s Citizens for a Better Environment; in Chicago she now serves as the Senior Policy Advocate for the Environmental Law & Policy Center. Further down the corridor was a busy coat check room, staffed by the couple’s daughter Kate. Upon entering the lobby, guests had a chance to greet Norquist, who stood by the bar, where guests were offered red and white wine, beer and soft drinks.

A buffet table immediately across offered an array of dishes, including Parmesan Risotto Cakes with Chunky Autumn Mushroom Ragu, Maple & Mustard Roast Salmon with Lemon Zest, Parsley & Toasted Almond Gremolata, as well as Roast Brussels Sprouts With Grapes, and Beet Salad over Arugula & Mixed Greens With Red & Green Apples, Pomegranite Seeds & Champagne Vinaigrette (the latter were both vegan and gluten-free). In addition, strolling waitstaff offered trays of appetizers to the 200 or so guests, of which a good 20 percent were from Milwaukee. An elegant round cake was decorated with seven candles and the message, “Happy 70th Birthday John.” It sat on a table, along with space for offerings from those who brought gifts in violation of the terms of the party invitation, which stated: “No presents please (your presence is the present wanted).”

Norquist would later find a beer stein and a beer mug from the Milwaukee Turners in his stash. They were brought by Julilly Kohler, who was joined by Turner President Art Heitzer, Esq. and his wife Sandra Edhlund, also a lawyer. Heitzer has been very busy with the Turner’s “Confronting Mass Incarceration” series of events and panels. The attorneys made the trip with former Representative to the Assembly Fred Kessler (also a former judge) and his wife, Joan Kessler who serves on the State of Wisconsin Court of Appeals. Joan took the wheel outbound and Fred drove back home.

Joining Norquist in the lobby were David Riemer and Milwaukee Alderman Bob Bauman, a Chicago native. Bauman gave a bit of perspective on the magnitude of the size of Chicago by pointing out that the population density of Rogers Park is about 28,000 people per square mile, about half again as much as Milwaukee’s Brady Street neighborhood, this city’s most densely populated neighborhood. But whereas Brady Street is within two miles of downtown, Rogers Park is eight miles north of the Loop — or about the distance from Milwaukee’s City Hall to the Village of Bayside, which has fewer than 2,000 people per square mile. Riemer, a former chief of staff for Norquist, has recently published a book entitled “Putting Government in its Place: the Case for a New Deal 3.0,” which has been recently excerpted in Urban Milwaukee.

Steve Filmanowicz, the Communications Director for Marquette University, was also there. He served as Norquist’s Communications Director while mayor from 2000-2004, and followed Norquist to Chicago, serving in the same position from 2004 to 2010 at the CNU, where he commuted by train from Milwaukee. He was accompanied by his wife, Raquel Filmanowicz, who serves as the Director of U.S. Community Affairs for BMO Harris Bank.

Jeff Bentoff, another former mayoral communications director, attended with his wife, Julie Penman, who had served in a number of capacities under Norquist, including as Assessment Commissioner. Patrick Curley, who retired last year after 14 years as chief of staff to Mayor Tom Barrett, was also in attendance. He previously served as the city’s lobbyist under Norquist. He chatted up Mike Morgan, who served as the Commissioner of City Development in the Norquist administration. Philip Philo Kassner, “photographer, poet, prankster,” also enlivened the party. Norquist’s son Ben, every bit as tall as his father, also joined in the festivities.

After the lobby mingling, guests filled their plates and headed to the theater for the evening’s performance, headlined by the city’s last singing mayor. Norquist and friends gathered on the dance floor, and performed a choreographed basketball routine, giving the event a Chicago-style urban edge. After the theatrics, the band took to the stage. The group was headed by John Sieger, a regular contributor to Urban Milwaukee. He was joined by vocalist Robin Pluer, magnificently costumed as always, and backed by Juli Wood on saxophone and his brother Mike Sieger on guitar. A touching moment came when Norquist started his set with “I Will Always Love You,” addressed to his wife. Norquist took the stage for a couple more tunes, including a duet with his daughter Kate that brought down the house. The band played on, increasing the beat and the tempo, and bringing a spirit of the dance to the audience — first the Chicago folks, it seems — and then the Milwaukeeans, who showed off their steps. 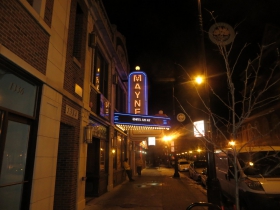 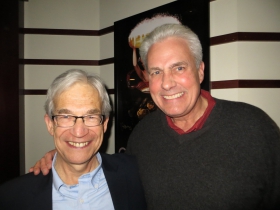 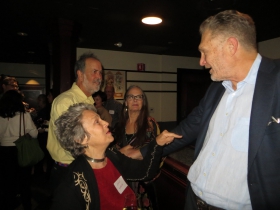 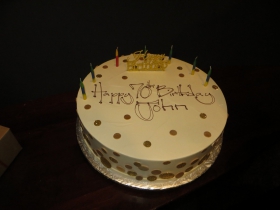 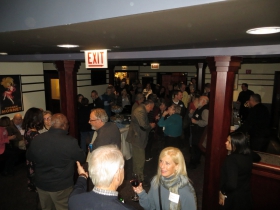 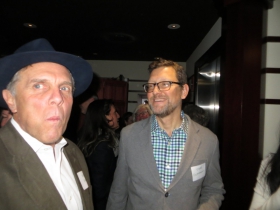