Why Milwaukee Needs a New Deal

Government can work better. And cities like Milwaukee will benefit. Excerpt from a new book. 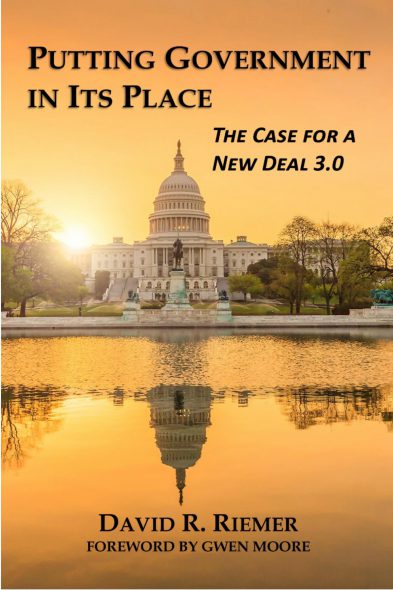 Putting Government In Its Place: The Case for a New Deal 3.0

My new book, “Putting Government In Its Place: The Case for a New Deal 3.0”, (HenschelHAUS), begins on a front porch in Milwaukee.

It’s a warm June afternoon. After a hard day’s work, the porch sitter (gender neutral) is enjoying the remains of the day, eating pizza, drinking beer… and not thinking about government.

But as I proceed, I point out the dozens of ways in which government is all around. The streets, sidewalks, fire hydrants, underground water pipes and sewer pipes, garbage carts, and nearby parks and schools are all owned by government and largely maintained by government employees. Many passing vehicles—police cars, fire engines, and recycling trucks—are government-owned and driven by government everyone.

“[Government] is everywhere,” I write. “It is hiding from you in plain sight. It’s so obvious you don’t notice it. It’s so visible you see right through it. It’s omnipresent; it’s a big deal in your life; and it escapes your observation.”

This omnipresent but invisible government does a lot of good. Yet we are also deeply unhappy with many of the results we’re getting from government—especially the federal government. According to polls by the Pew Research Center, between 2008 and 2019 fewer than 30%—and at times below 20%—expressed confidence in the federal government to do what is right at least most of the time.

Alas, we have good reasons to be unhappy with government, especially the one in Washington, DC.

For nearly 45 years, the percentage of poor Americans has remained essentially flat. Men’s earnings and median family income (adjusted for inflation) have barely risen. The percentage of uninsured also remained basically the same from the mid-1970s until Obamacare. After a one-time drop, no further progress has been made.

Meanwhile, we’re not exactly delighted by the damage to the environment, workers, consumers, and investors that weak market regulation is letting corporations get away with. Greenhouse gas emissions have accelerated destructive climate change. Lead and manure foul urban water systems and rural acquifers. Workers’ wages are stolen in billions. Consumers still face the risk of tainted food. Investors are by no means safe from fleecing.

Nor are Americans pleased that government subsidies and loopholes stick them with excessive taxes while letting the super-rich and giant corporations pay far, far less than a fair share—sometimes (perhaps Donald Trump) nothing at all.

But the four distinct “policy clusters” that emerged over time in producing what I call the New Deal writ large—that is: (1) broad based economic security programs, (2) means-tested welfare programs, (3) market regulation, and (4) market manipulation—have fallen short. A blend of missing, messed-up, and mistaken federal policy—now interacting with a “new normal” of intense international competition and highly disruptive technology—has proven insufficient in achieving steady gains in economic security and an effective market.

At the same time, we should eliminate two other policy clusters: means-tested welfare programs and market manipulation.

First, we should greatly widen and improve the nation’s economic security policy structure.

Over a dozen reforms are needed. Work—more work, better work—is the key. Specifically:

A much smaller version of these reforms, according to a rigorous analysis by the Urban Institute, would cut U.S. poverty by 50% or more. The more sweeping set of reforms outlined above is capable of driving down poverty to almost zero, raising incomes substantially for tens of millions of Americans as well as improving health and education..

Second, we should wind down—and eliminate as quickly as possible—all means-tested welfare programs.

The improvement of America’s economic security structure will end the need to have a separate, tattered, unpopular welfare system that requires people to be poor, and remain so, to get money, money-like credits, or health care.  As FDR urged Congress in his 1935 State of the Union Address, we should “quit this business of relief.”

The programs that should be phased out include: TANF, SNAP (Food Stamps), LIHEAP (energy assistance), housing subsidies, and Medicaid.

Third, we need to substantially strengthen federal regulation of the market to stop damage to the environment, as well as prevent harm to workers, consumers, and investors.

The United States needs to step up and do its part to halt and reverse climate change, as well as improve water quality so that water is always drinkable. The right balance between prohibition, limitation, and price signals (i.e., taxes and fees) must be found. In addition, regulatory agencies whose mission it is to prevent harm to people and firms must have the laws, rules, and resources needed to fulfill their missions.

Fourth, we ought to eliminate hundreds of billions of dollars of market-manipulating subsidies for politically favored types of consumption and investment.

Americans individuals and firms should be the “sovereign” determiners of the direction and shape of the market. No special subsidies or tax loopholes should be lavished on particular firms, economic sectors (e.g., agriculture, energy, housing, and transportation), or ways of making money (e.g., capital gains). The excessive property, sales, and income taxes paid by most American should be lowered as a result of terminating government’s pernicious role in doling out subsidies and tax loopholes to hand-picked losers and winners.

If we go about it the right way, overall spending and taxes would not increase.

And Milwaukee will be a big winner. Milwaukee has two big problems. The proposed New Deal 3.0 will help solve both.

First and foremost, the population of the City of Milwaukee has disproportionately far more unemployed, underemployed, impoverished, and low-income residents than the rest of the metro area.  The economic security policies of a New Deal 3.0 will dramatically—and permanently— raise city residents’ levels of employment, earnings, and income.

Health care will also improve. And since central Milwaukee’s residents will have far more purchasing power, the number and quality of small businesses in the central city—grocery stores, hardware stores, restaurants, cafes, and more—will increase. The City of Milwaukee will gain the most from this giant uplift in its economy. But the entire region will also reap rewards.

Second, as we all know, there is a high level of racial segregation in housing and education in the Milwaukee area.  Many parts of the City of Milwaukee are all-black, all-Hispanic, and all-white, although several areas are integrated. The suburbs are almost entirely segregated; they are virtually all-white. Because where you live still largely determines where children go to school, Milwaukee-area schools remain heavily segregated.

The proposed New Deal 3.0 will facilitate the integration of housing and schools. It will enable more black and Hispanic families to afford homes in a wider array of neighborhoods and communities, including primarily all-white neighborhoods that are now economically off-limits. Black and Hispanic children will thus be more able to attend integrated schools.

In addition, moving into central Milwaukee neighborhoods with significant black and Hispanic populations, and that are no longer overwhelmingly poor, will become a more appealing option to some middle-income—including white—renters and home buyers. The appeal of such neighborhoods will be reinforced by the knowledge that where you choose to live will not artificially limit where you can enroll your children in K12 schools.

David Riemer has held legal, budget, and policymaking positions with a former mayor of Milwaukee, two former governors of Wisconsin, and the late Senator Edward Kennedy.

The book Putting Government In Its Place: The Case for a New Deal 3.0 from HenschelHAUS is available at area book stores or online.

One thought on “Why Milwaukee Needs a New Deal”