By Corri Hess, Wisconsin Public Radio - Nov 4th, 2019 02:47 pm
Get a daily rundown of the top stories on Urban Milwaukee 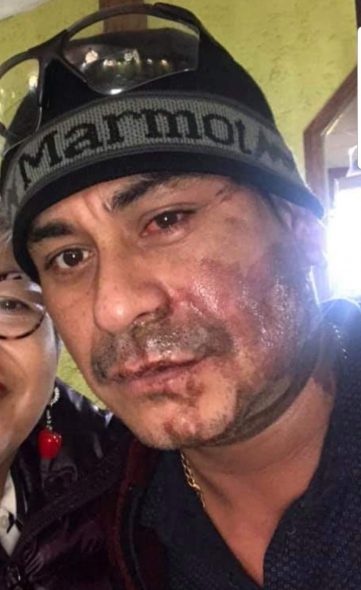 Milwaukee police have made an arrest after a man was attacked on the city’s south side and burned with acid in what officials are saying is a hate crime.

Mahud Villalaz suffered second-degree burns to the left side of his face after he said he was confronted outside of a restaurant Friday night by a man who accused him of being in the country illegally.

Villalaz is a United States citizen who was born in Peru.

“He said, ‘You come here and invade my country,'” Villalaz said during a press conference Saturday.

Villalaz said he ignored the man and moved his truck. When he got out of his truck again, Villalaz said the man was still waiting, with a bottle in his hands. Villalaz thought it was liquor.

Then the man reportedly threw the acid in Viallaz’s face.

“It was burning really bad,” he said. “I was screaming for help in the restaurant.”

Villalaz was treated at a hospital and released. He said his vision is still blurry, and he plans to go back to the doctor Monday.

A 61-year-old man was arrested Saturday in connection with the incident, according to the Milwaukee Police Department. Charges are expected to be brought forward by the Milwaukee County District Attorney’s Office soon.

Milwaukee Mayor Tom Barrett and Alder Jose Perez, who represents the district where the crime occurred, both said they hope the case will be prosecuted as a hate crime.

“I want the law utilized to the extent that it has to be,” Perez said. “I know there will be review of the video and we’ll see if there is an opportunity for enhancement of charges.”

Barrett, a Democrat, said Monday that President Donald Trump’s anti-immigration rhetoric is partly to blame for what happened to Villalaz.

“This type of racial verbal attack and now physical attack is condoned in the highest level of governments in our country,” Barrett said. “This anger towards people of other countries is being fed by our president. And by his followers. And what we saw over the weekend is a manifestation of that anger.”

Barrett said there will be conversations over the cause of the disagreement between Villalaz and the man accused of throwing the acid in his face, but no argument should lead to that type of violence.

“I don’t know what was in the mind of the man who threw acid in the man’s face. Who knows what is in the mind of a man who throws acid?” Barrett said. “But I can tell you this: we as a nation, and we as a city, have to do better than this. That means leaders in all levels of government, starting at the White House, have to just tone it down. We have differences, but let’s not create a feeding frenzy with this type of activity.”

The Wisconsin Republican Party could not immediately be reached for comment.

During Saturday’s press conference, Villalaz said the hardest part has been talking to his family about what happened.

“My son calls me today and says, ‘Daddy what happened to you?'” Villalaz said. “What do I tell him? Some crazy guy did this?”

State Rep. JoCasta Zamarripa, D-Milwaukee, said Saturday she is angry that a racist was able to live out his belief using violence.

“I know that unfortunately so many people in my life have heard the phrase ‘Go back to your country,'” she said. “I’m here to tell you, this is our country. This is our state. This is our city. Milwaukee will not stand for this.”