Mayor says scooters could be back on Milwaukee streets in a few weeks. 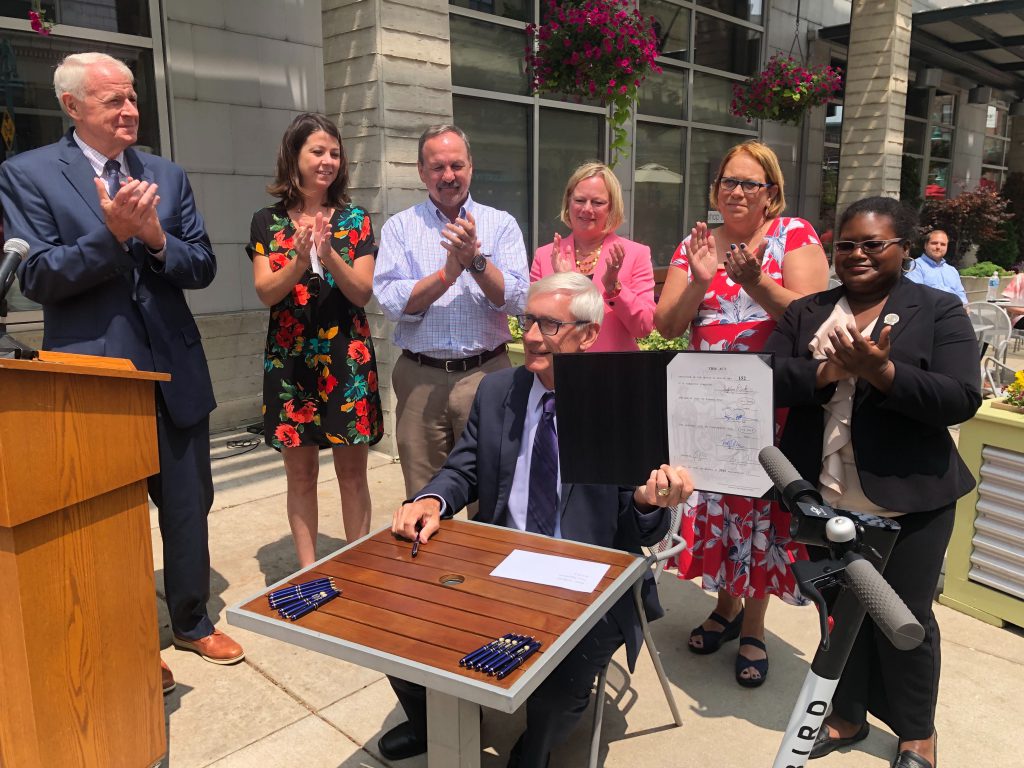 As many as six scooter companies could soon be deploying hundreds of scooters each on Milwaukee streets.

“I’m excited to be in the great city of Milwaukee and signing this bipartisan bill that will expand transportation options for residents and visitors to Milwaukee and other communities across the state,” said Evers. The governor noted the bill clears up ambiguity about the legal status of electric scooters, reduces the need for single-occupancy automobiles and grants municipalities the ability to regulate safety and access.

“It was clear to us that this mode of transportation was something that some people want to partake in,” said Mayor Tom Barrett. “We want this to be a city where there are many modes of transportation.”

The legislation, which will go into effect on Wednesday, authorizes municipalities to regulate the size of dockless scooter fleets, areas in which they may operate and whether they can ride on the sidewalk. The law authorizes scooters to go up to 15 miles per hour on city streets. Evers and Barrett both said a key component of the legislation was allowing cities to regulate the scooters.

The Milwaukee Common Council is scheduled to vote on a pilot study program Tuesday morning that will codify the requirements for scooter companies to operate in the city. Companies will be required to comply with the terms of the pilot study.

The city is poised to allow scooter companies like Bird and Lime to place up to 350 dockless scooters each in an area east of Interstate 43 running from W. Oklahoma Ave. north to the city limits near W. Capitol Dr. that includes Downtown, the East Side, Brewers Hill, Bronzeville, Harambee, Bay View and a special cutout west to N. 22nd St. for Marquette University.

The companies would be able to place additional scooters, bringing each company’s total fleet size to 750, in two additional zones which encompass the rest of the city and are roughly divided by Interstate 94. Department of Works multimodal transportation manager Michael Amsden characterized these two zones at a recent hearing as an “equity component” that DPW believes is important to assure all the scooters don’t end up in areas like Bay View and the East Side. “We really want this to go citywide,” said Amsden. Scooter fleets would be allowed to increase to 1,000 in size if certain performance metrics outlined in the pilot study, including utilization, are met.

Six operators have submitted inquiries to the city in recent months. They include Bird, which previously operated in the city before agreeing to withdraw its scooters, as well as Uber-owned Jump, Lime, Lyft, VeoRide and Spin. Scooters from Jump, Lime and Bird were on display at the bill signing.

Barrett said he expects to see scooters on city streets “within the next few weeks and definitely by the end of summer.” DPW spokesperson Brian DeNeve said the department would work efficiently to review all applications.

The city’s pilot study is scheduled to sunset on December 31st, 2019. A representative of the City Attorney’s office said the likely outcome is creating a license for the companies, with the pilot providing guidance on license cost and regulations.

A similar pilot program exists for dockless bicycles, but only one applicant, Lime, has applied. The company has not deployed any bicycles in Milwaukee, consistent with an international move towards electric scooters rather than bikes by dockless mobility providers.

The city also settled its lawsuit against Bird last week. The company, which dropped off more than 100 scooters on city streets without permission last June, agreed to pay the city $65,000 as well as providing $30,000 in non-brand scooter helmets or scooter parking solutions.

For more on the city’s plan to regulate scooters, including prohibiting sidewalk riding and intoxicated riding, see our coverage from late June.