Is the City Ready for Scooters? 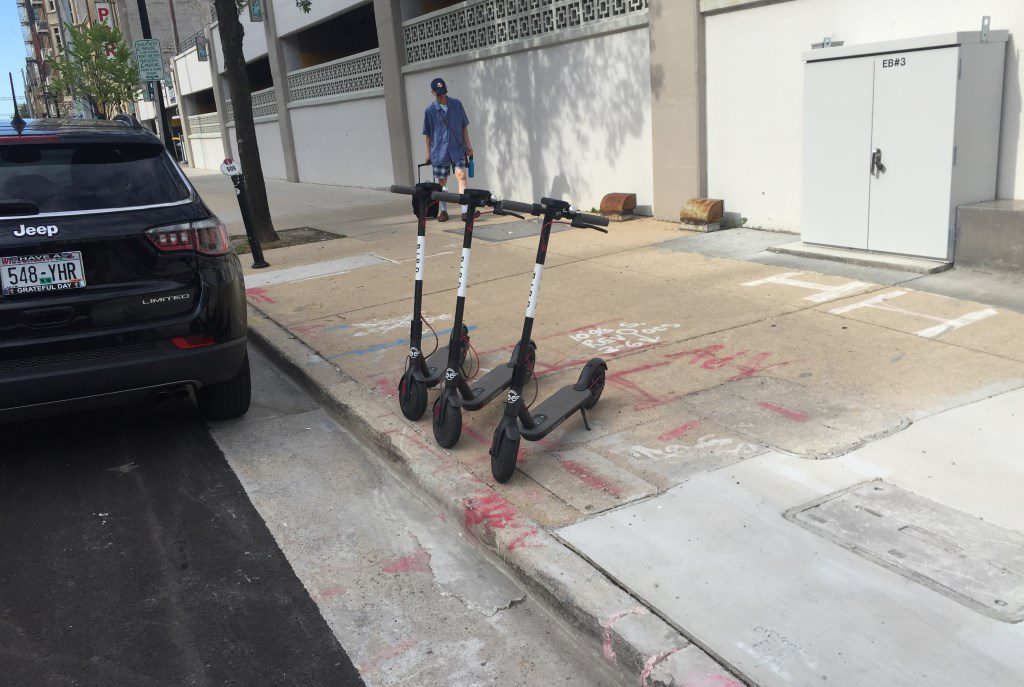 Three of Bird’s scooters were parked on N. Milwaukee St. on the morning of July 9th, 2018. Photo by Dave Reid.

The scooters are coming, but is the City of Milwaukee ready?

It could be weeks or just a few days before they’re back, said Department of Public Works multi-modal transportation manager Michael Amsden at a Wednesday meeting of the Public Works Committee. He told the committee that several operators have already inquired about deploying the battery-powered scooters on city streets.

But with that comes a challenge as to how the city will regulate the operators and scooters themselves, including how and whether to ticket rule violators operating under the influence and exceeding speed limits.

As approved in 2018, the city will allow the scooters to be placed on city streets as part of a pilot program to try it out and analyze results. The recently passed state legislation, which is awaiting the signature of Governor Tony Evers, grants the city ability to regulate the dockless electric scooters.

Assistant city attorney Tyrone St. Junior said the plan is for Milwaukee Police Department officers to ask riders to operate on the streets. “If our officers ask someone to stop the ride or get off the sidewalk, we expect them to comply,” said St. Junior. He said if riders don’t comply, the measure could be escalated possibly to obstruction. “We want our officers to have a wide latitude.”

“They will absolutely ride on the sidewalk. The police will do nothing about it as they did last summer, and quite frankly I don’t know that we want the police to be chasing millennials around on scooters, but we will get the complaints,” said committee chair Robert Bauman. Murphy echoed Bauman’s suggestion that the police shouldn’t be chasing “well-intentioned, otherwise law-abiding” citizens.

But the lack of an ordinance isn’t the only problem.

“I cringe when I think about this, but one of the things I haven’t heard about is blood alcohol level or under the influence,” said Ald. Mark Borkowski. “We are all scared to death about the people that abuse it and the collateral damage to the poor grandma that just happened to be in the wrong place and a scooter ran up her back.”

“As far as the state Legislature’s concerned, you cannot get an OWI on one of these things,” said St. Junior.

Amsden said the city will closely monitor the time of day in which the scooters can be operated and could adjust the window without having to come back to the council.  “We see the value of providing transportation options, especially for workers that may need those and don’t work 10 to 5,” said Amsden.

Another looming issue is how fast they can go. State law would allow scooters to go up to 20 miles per hour, but only 15 miles per hour on public right-of-ways. The vehicles are required to have speed governors to limit their speed. “So we’ll have the radar guns out,” joked Ald. Nik Kovac.

St. Junior said the pilot study is setup to penalize the companies, not the riders. “We didn’t want to clog up our municipal courts with tons of violations from scooters and not be able to penalize the companies,” said the city’s attorney. “The idea is we wanted to give DPW as much flexibility to figure this thing out.” The pilot would allow the Commissioner of Public Works to revoke a participating company’s ability to provide service in Milwaukee or amend the pilot program’s guidelines.

“They could show up July 10th and if there are overwhelming problems we could shut them down by July 13th?” asked Bauman. Yes, said St. Junior.

“Personally I hope this works,” said Bauman. “I heard from a lot of people that enjoyed using these devices. They were fun. They had some utility. Mostly they were fun.”

Amsden said he hopes they encourage a safer pedestrian and cycling environment by getting more people of out of cars.

The pilot study is scheduled to sunset on December 31st, 2019. St. Junior said the likely outcome is creating a license for the companies, with the pilot providing guidance on license cost and regulations.

How Many Will Come?

The city is poised to allow scooter companies like Bird and Lime to place up to 350 dockless scooters each in an area east of Interstate 43 running from W. Oklahoma Ave. north to the city limits near W. Capitol Dr. that includes Downtown, the East Side, Brewers Hill, Bronzeville, Harambee, Bay View and a special cutout west to N. 22nd St. for Marquette University.

The companies would be able to place additional scooters, bringing each company’s total fleet size to a maximum of 1,000, in two additional zones which encompass the rest of the city and are roughly divided by Interstate 94. Amsden characterized these two zones as an “equity component” that DPW believes is important to assure all the scooters don’t end up in areas like the Bay View and the East Side. “We really want this to go citywide,” said Amsden.

Based on Amsden’s mention of “several” interested companies, Bauman speculated that as many as 1,400 scooters could show up on downtown streets in the next month.

What happens when there is a collision and an operator is drunk? Bauman said he didn’t expect someone’s home or automobile insurance to cover them. “Practicing law for 40 years, I just try to think about what could wrong and how to avoid it,” said the alderman.

The companies are required to provide umbrella insurance that would cover up to $5,000,000 in liability per incident. St. Junior said the companies could sue the city, but the terms and conditions are designed to indemnify the city. He said lawsuits in other markets are underway and the city is monitoring them.

Riders are not required to wear a helmet as part of the pilot.

One thing Bauman and others on the council are happy about? The local control afforded in the state law. “You guys did a great job,” said Bauman to city lobbyist Brenda Wood and other administration officials.