By Jon Peacock, Wisconsin Budget Project - Jun 12th, 2019 12:18 pm
Get a daily rundown of the top stories on Urban Milwaukee

The bill that was rushed through the legislature in early December was designed to narrow the ability of the newly elected governor to influence state policy choices. One of the ways the lame duck bill accomplished that was by settling numerous issues and taking them off the table before Governor Tony Evers was sworn in, so there would be no need to compromise with him.

Republican legislators attempted in that bill to settle a tax policy issue, but the hastily crafted lame duck bill contained an error that limited to just one year the tax change that they were trying to cement into place. Because of that mistake, Republicans may have to compromise with the Governor in deciding how to use the $60 million per year that the state is receiving as a result of a Supreme Court ruling that allows states to collect sales taxes on internet purchases.

Before getting to the specifics, it’s important to note that as things currently stand, low- and middle-income households in Wisconsin pay a higher percentage of their income for state and local taxes than the wealthiest state residents. Wisconsin’s tax system is a major driver of economic inequality and contributes to the increasing concentration of income and wealth in a few hands —hands that are most likely to be white, due to a long history of racial discrimination.

State lawmakers cut taxes by billions of dollars over the last eight years, but those tax cuts disproportionately benefit high-income Wisconsinites. In fact, as Governor Scott Walker and state legislators were cutting income taxes in ways that primarily benefited the very wealthy, they increased taxes on low-income families by cutting the state Earned Income Tax Credit and the Homestead credit.

The tax change in the lame duck bill was consistent with the trend of helping high-income state residents at the expense of low-income Wisconsinites. The majority party attempted to lock into place a decision to use increased sales tax revenue for an income tax cut that primarily benefits people with high incomes. They wanted to accomplish that before Governor Evers was sworn in and could start pushing for more progressive state tax policies.

The tax change that they put into place, but accidentally limited to the 2019 tax year, takes the increased sales tax revenue collected from the vast majority of Wisconsinites and uses it to cut the state’s progressive income tax. The new income tax cut does virtually nothing for the lowest fifth of Wisconsin taxpayers. In fact, our analysis of Legislative Fiscal Bureau data found that the top 0.2% of tax filers – those with income over $1 million – get more from this tax cut than is received by all Wisconsinites who make less than $60,000, and who comprise nearly 70% of all filers. 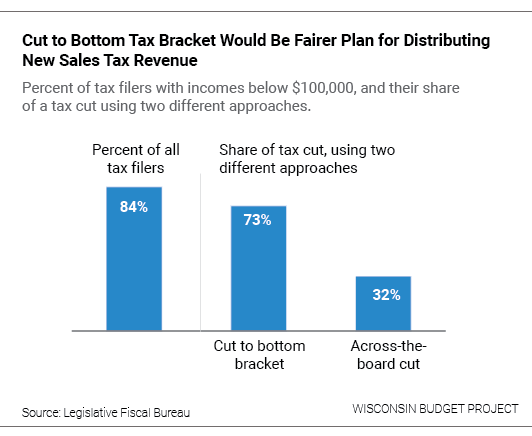 An income tax cut does not have to be skewed in favor of the wealthy. The bar graph illustrates that although the 84% of Wisconsinites who have income below $100,000 per year now get just 32% of the benefit of the $60 million being redistributed by the new income tax rate cut, they would get 73% of the benefit of an alternative proposed by the governor. That alternative would provide a flatter income tax cut by just reducing the tax rate for income in the lowest bracket.

The Joint Finance Committee (JFC) will vote this week on how to use the increased sales tax revenue, and they will probably stick with the cut to all brackets, which disproportionately benefits the wealthiest Wisconsinites. However, that won’t necessarily be the last word because the hastily written lame duck law did not accomplish the Republican’s goal of precluding the new governor from being able to have some say in how the $60 million per year is used.

Governor Evers’ budget contains many proposals that aim to make Wisconsin’s tax system more equitable. His plan to cut the tax rate for middle-income state residents would reverse cuts made in recent years to the state Earned Income Tax Credit and the Homestead credit. He seems to understand that past tax policy choices that favor wealthy people are contributing to an economic divide that is holding back lower-income parts of Wisconsin, particularly rural areas and communities of color.

Republicans are working to block much of the governor’s agenda, including most of the tax changes he has proposed. However, they cannot get the income tax changes they want unless the governor signs those into law. Governor Evers should make it clear to the legislature that he will not sign off on new tax cuts if they are fiscally irresponsible, if they leave too little revenue for other important priorities, and if they fail to start reversing the tax changes that have hurt disadvantaged families and communities in our state.