The speaker would like to strip more power from Evers.

By Melanie Conklin, Wisconsin Examiner - Jul 31st, 2020 01:28 pm
Get a daily rundown of the top stories on Urban Milwaukee 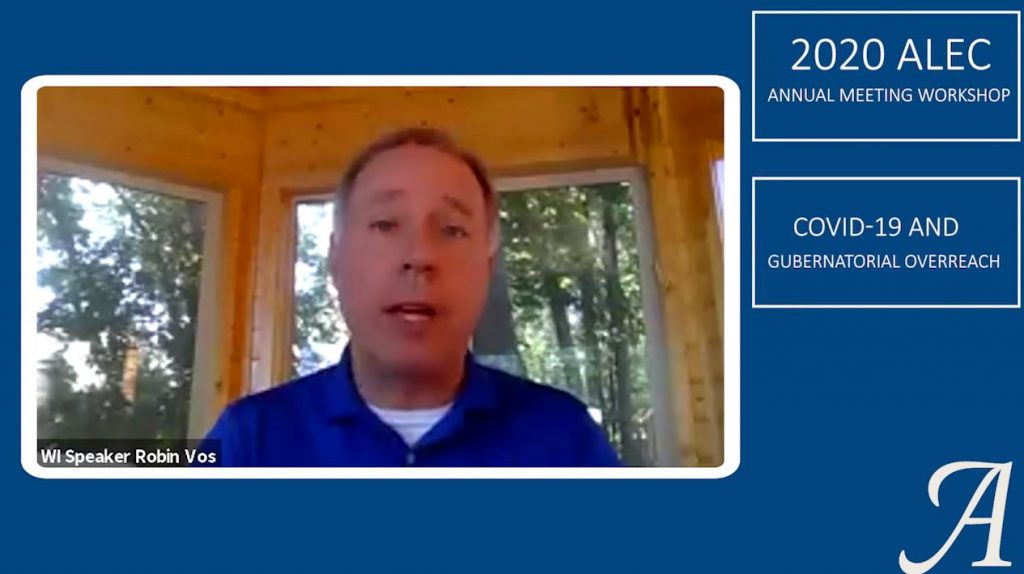 Republican Assembly Speaker Robin Vos has a few regrets about the notorious lame duck session he oversaw in December of 2018.

You may recall that Vos and Senate Majority Leader Scott Fitzgerald — with help and a signature from then-Gov. Scott Walker who had just lost an election to Gov.-elect Tony Evers —  set about to curtail Evers’ powers in various ways. Laws passed in the lame  duck session ensured that Evers, a Democrat, could not undo laws the Republican-led Legislature  passed on topics ranging from blocking healthcare to limitations on voting. While they were at it, the legislators also grabbed powers from incoming Attorney General-elect Josh Kaul, giving themselves power over lawsuit settlements and rearranging his department.

Last week, Vos took a walk down memory lane in a panel discussion at the 2020 annual meeting of the American Legislative Exchange Council (ALEC), the rightwing legislative and corporate lobbyist think tank that drafts model legislation. ALEC was the birthplace of many of the right-leaning laws that Fitzgerald, Vos and Walker put in place in Wisconsin, over Democrats’ objections, when they had full control of all branches of government.

The panel Vos spoke on was called, “COVID-19 and Gubernatorial Overreach.” For the panel discussion among legislative leaders from Arizona, Utah and South Dakota, Cliff Notes might simply read: “I do not like it when the governor makes decisions and does not include us.”

But as moderator and Speaker of the Mississippi House of Representatives Philip Gunn pointed out, Vos was the only panel member who was forced to deal with a “governor of the opposing party.” Gunn also noted that Vos v. Evers quarrels had made national news.

It gave the Wisconsin speaker a unique experience to share with his fellow conservatives. He kicked things off by describing how Evers made him feel excluded:

“He did all kinds of things that clearly did not meet the letter of that bipartisan cooperation,” said Vos. “In the state of Wisconsin we’ve taken a slightly different tack. As you know we had a Supreme Court case that was decided which really put an end to many of the executive powers that our governor had chosen to exercise, really, without consulting the Legislature.”

The tyranny of Czar Tony

Panelists were prompted to  talk about what “measures your governor has taken that seem to be extreme.” The picture Vos painted of Evers — to whom he never referred by name — was of a megalomaniac who fails to work well with others and does not care about the public good so long as he gets his way. Evers acts like a  “king” or “czar,” as Vos put it, who shoves his dictates down legislators’ throats and is partisan, manipulative and disagreeable.

“You would think knowing that he’s got a divided Legislature, the governor would have found every way possible to work together and try to say ‘We should be fighting the virus not each other,’” said Vos. “But right away in the beginning, he began to issue executive orders without consulting, in any meaningful way, my Senate counterpart or myself.”

Vos lamented this, because he was always happy, he said, to work with the executive.

“I think the Legislature was always a willing partner,” Vos claimed before lambasting Evers for not following the example of President Abraham Lincoln and bringing “together that team of rivals where we say, ‘We’re going to fight the common enemy and not each other.’”

It was “truly disappointing,” Vos continued, that Evers preferred a fight.

“It really, in many ways kind of devolved into an argument, which should have never occurred,” said Vos. “As co-equal branches of government, this would have been a prime example for us to show we can work together. But our governor was incredibly partisan.”

So “we unfortunately had to go to the courts to be able to resolve the difference.” As proof of Evers’ intense partisanship, Vos told the story of a member of Evers’ staff secretly taping the meeting with legislators after the Wisconsin Supreme Court ruled against the Evers administration’s ability to extend its Safer at Home order.

“Can you imagine a more disingenuous act then to say, ‘We’ve just lost the lawsuit and now we’re going to come together and talk about what the potential bipartisan interests there are.’ And then you record it and use it for partisan advantage? So I think that it’s just a good reminder that, you know, this is where you test your mettle,” Vos stated.

The bickering and lawsuits and partisanship and authoritarian rule that Vos described having to put up with from Evers may seem ironic to Vos’ adversaries who have described his style as speaker of the Assembly in exactly the same terms.

But it brought Vos to the topic of his regrets from that Dec. 2018 lame duck session that he and Fitzgerald led, over objections from Democrats and even a past Republican governor, who said it looked like sour grapes, adding ““It appears completely political, (like) a power grab.”

“Lucky for us, we had a special session that concluded right before our new governor was sworn in, where we had a thorough discussion of what powers the executive had — and actually took many of the powers back,” Vos told his fellow ALEC legislators. He explained that those powers had been mistakenly given to the governor by prior Legislatures.

So Vos regrets he did not do more to crush executive branch powers while he had the chance. He is currently conducting a thorough review, so that if he “ever had the chance to fix it,” here’s his plan.

“So we got over $2 billion in federal funding from the federal government (in CARES Act pandemic relief funding) entirely at the discretion of the governor — 100% — we had nothing to say about it … and our governor handed it out like candy.”

2. Require the governor, by law, to meet with legislative leadership.

“I am certain that when they put the statutes in for the pandemic in our state, they never in a million years assumed that the governor would not communicate with legislative leadership, I think that was presumed … So I would love to require that the governor has to consult on a regular basis. …  It requires three to tango, right? Both branches of the legislature and the governor should agree to do that. ”

3. Require executive orders to have an ending date.

“I think that we also need to ensure that executive orders are done on a short-term basis and they’re not going to stay forever. And, I think again, that should never be where a czar gets to issue an order and you are required to follow it with no opportunity for any kind of legislative review or even input, frankly.”

4. Require the public to watch Schoolhouse Rock. (In fairness to Speaker Vos, this was more of a suggestion about why the governor gets away with what he’s doing and the Legislature is misunderstood. He blamed an uninformed public that did not watch the animated musical skits to help children learn civics.)

“We have to go to court to make the point that the governor is exerting their authority too vigorously. I think a lot of citizens haven’t watched Schoolhouse Rock. They kind of forget that leaders are supposed to have this interaction. I think that’s a big challenge that [we have to make clear] to leaders in the future so that people remember that we’re supposed to be co-equal branches, not subservient.”