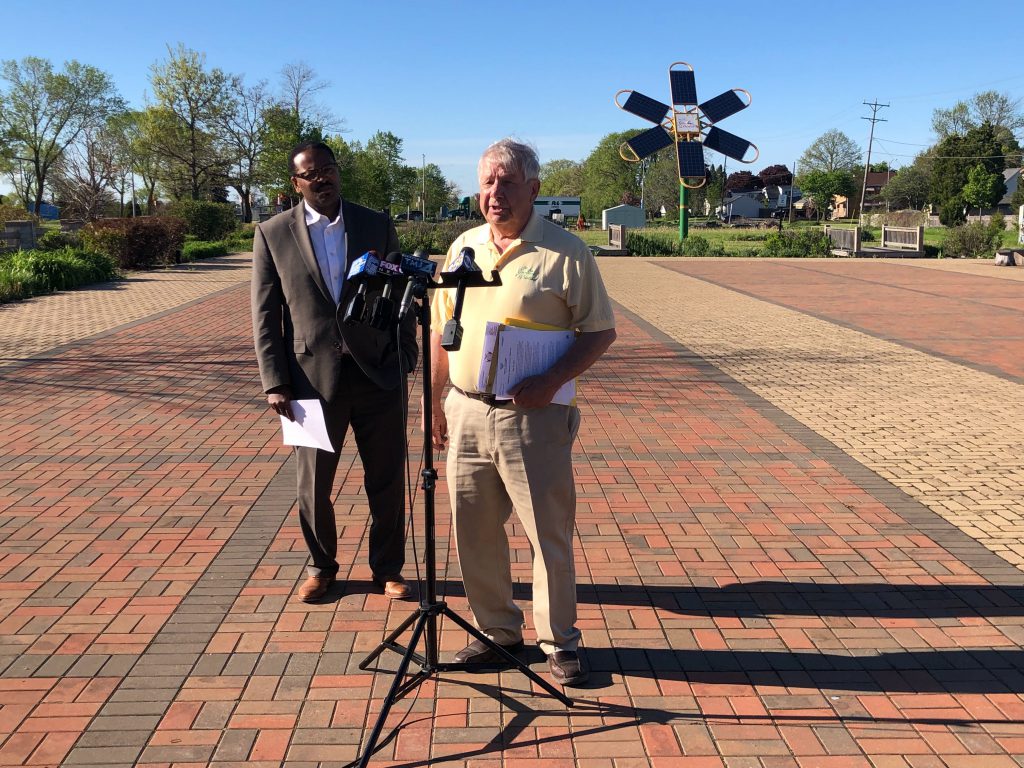 Alderman Terry Witkowski announces his resignation with Council President Ashanti Hamilton at his side. Photo by Jeramey Jannene.

Longtime southside Alderman Terry Witkowski is calling it quits. His aide Scott Spiker has filed to run for the seat.

Witkowski, the biggest advocate for the policies of Mayor Tom Barrett on the council, was first elected in 2003. He represented the council’s 13th District, which includes the Garden District, Milwaukee Mitchell International Airport and a host of far south side neighborhoods.

The 74-year-old alderman recently received substantial media attention after sending a taxpayer-funded, quarterly newsletter to district residents that said the 15 member council was making decisions based on race. “This term is more an anti-mayor/color-of-our-skin council,” Witkowski wrote. “Fairness and issues don’t seem to matter much.”

The newsletter drew sharp rebukes from many of his colleagues, including Alderman Mark Borkowski and Alderwoman Milele A. Coggs.

Council president Ashanti Hamilton, at whom the remark was targeted, told Urban Milwaukee: “Few if any votes have fallen completely along racial lines.” He said that race was an issue, but that elected officials in the minority-majority city need to deal with it honestly.

But Hamilton was by Witkowski’s side as he announced his resignation Thursday evening. “I found him to be a very knowledgeable guy about the workings of city government,” said Hamilton.

Witkowski worked for the city for 31 years before being elected, including serving as Safety Director for the Milwaukee Safety Commission. Hamilton said Witkowski’s perspective on public safety helped open his eyes.

“It is time for a summer off. I have worked since I was 12,” said Witkowski in a press release. The alderman will resign on May 30th. He said he was planning the announcement since September.

“I have never known that a 74-year-old man deciding to retire was big news,” said Witkowski while standing before reporters from almost all of the local news networks.

The alderman said he was proud of his work on the council. “I think the City of Milwaukee is in great shape,” said Witkowski, while acknowledging that plenty of problems still exist. He ticked off a list of accomplishments including creating business-friendly city departments, the creation of civilian Community Service Officers in the Milwaukee Police Department, neighborhood improvement and the formation of a number of business improvement districts.

But a press release from the Freshwater Life Action Coalition and Kingfish MKE paints Witkowski’s involvement with Whitewater in a different light. “Information that KINGFISHmke requested through Open Records Request law regarding payments received by Blue Sky Consulting from the University of Wisconsin-Whitewater for studying seat belt usage raised serious questions because of the lack of documentation provided by the University regarding final reports, outcomes and only one contract for several years of payments,” said FLAC spokesperson Robert Miranda in a statement.

The press release from Kingfish states “The resignation comes on the heels of meetings between Freshwater for Life Action Coalition (FLAC), KINGFISHmke and other groups with representatives of the State Attorney General’s office and Milwaukee County District Attorney to pass on information regarding serious questions about a business owned by Ald. Witkowski named Blue Sky Consulting Inc.”

Blue Sky Consulting, which lists Witkowski as its registered agent, is listed as being administratively dissolved in 2010 in Wisconsin Department of Financial Institution records.

Witkowski said Miranda’s statement was “political payback” for speaking the truth. The alderman issued a statement in March reinforcing the city’s belief that lead paint, not lead in water, is the primary source of lead poisoning in Milwaukee after a presentation by Miranda’s FLAC group. The alderman insisted that he always disclosed any consulting income in his ethics statement.

The alderman said Miranda’s group has made many requests for personal records in recent weeks. “As soon as Donald Trump turns over his taxes I will be happy to share my personal finances,” said Witkowski.

Witkowski survived a closely-contested election in 2016, defeating Packing House restaurant owner Chris Wiken with 53.66 percent to 46.11 percent. A key issue in the race was the recently approved streetcar, which Wiken vehemently opposed and Witkowski backed.

Witkowski’s aide, Scott Spiker, filed to run for Witkowski’s seat on Tuesday, May 21st. Does the timing of Witkowski’s announcement benefit Spiker? “I don’t know. That’s not for me to say,” said Witkowski. He said he is not endorsing Spiker at this time.

A special election would need to be called to fill Witkowski’s seat before the April 2020 election. Hamilton said a primary, if necessary, would be held in mid-July. The general election is likely to be held in mid-August.

Witkowski was first elected in a special election held following the resignation of Jeff Pawlinski. The two-term alderman resigned as a result of a plea agreement regarding the misuse of campaign funds.