Regardless of the weather, our neighbor to the north has lots to offer. 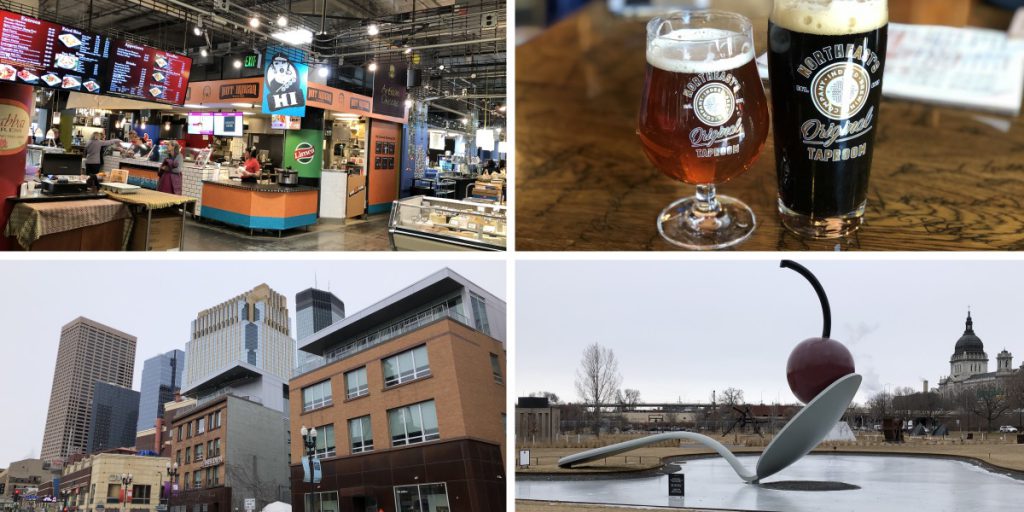 The idea of a getaway for Milwaukeeans is often associated with heading south, but don’t overlook Minnesota’s biggest city. Minneapolis boasts a wealth of cultural attractions that make it worth the visit, regardless of the weather. Whether it’s in the middle of January or the hottest days of August, the city offers something for people of all ages. It’s cosmopolitan, yet affordable, true to its Midwestern roots, but surprisingly chic.

Minneapolis owes its economic foundation to flour production as much as Milwaukee does to manufacturing. And just like Milwaukee, many of those mills have left the city high and dry. The former Washburn A Mill on the Mississippi River has been converted to a museum showcasing the industry’s impact on the city. A former freight elevator has been converted into a mobile theater, giving guests a step-by-step look at how the mill operated before dropping off visitors at the top for an incredible skyline view. It’s a museum experience unlike any I’ve encountered.

Just east of the Mill City Museum, the Guthrie Theater complex matches the massing of the historic Mississippi River mills. But what’s inside the starkly blue building is a world-class collection of theaters housing the best performances in the Twin Cities. During my recent trip, I saw the Guthrie’s production of The Great Leap. Don’t want to watch a whole show? A 45-minute backstage tour is offered.

If the weather cooperates, don’t leave the Mill District before checking out the aptly-named Gold Medal Park and historic Stone Arch Bridge. You can walk across the bridge, following the route millions of tons of flour took over the years, and get that perfect selfie with the skyline in the background.

If you enjoy Sculpture Milwaukee, you’re going to love the Walker Art Center. The center, home to the iconic Spoonbridge and Cherry sculpture, has both indoor and outdoor components. The outdoor sculpture garden is free to visit, while the indoor galleries have an admission fee. It’s worth the price for the many bold and experimental pieces found inside.

Unlike some of its peers, Minneapolis has a great jazz club featuring a large number of touring acts. Cabaret-style seating creates an intimate environment despite a 350-person capacity at The Dakota. The food is farm-to-table, the drink menu is impressive and the acoustics are great. Book your tickets in advance. Is jazz not your thing? Minneapolis has a number of other downtown concert venues.

Whether it’s the dead of winter or the Fourth of July, Minnehaha Park is a must see. The city park, located a short walk from a light rail station, is home to Minnehaha Falls. The 53-foot waterfall draws almost a million visitors a year. Regardless if it’s frozen or flowing, it’s a sight to behold. Learn more.

Depending on when you’re there, at least one of Minneapolis’ three professional sports teams will be in season. The NBA’s Minnesota Timberwolves play at the Target Center and just around the corner MLB’s Minnesota Twins play at Target Field. The Minnesota Vikings play football at US Bank Stadium, which is worth touring even if the team isn’t in town.

Make the Midtown Global Market a must-see on any Minneapolis visit. It’s a few miles outside of Downtown (a quick light rail and bus ride gets you there), but worth the trip. Unlike many public markets (and food halls), the market features a number of truly small businesses serving up ethnically-diverse food and crafts. I used my visit on my most recent trip to try a delicious camel burger from Somalian-owned Safari Express (Minneapolis is home to the largest concentration of Somalians in the United States). You won’t leave disappointed, or hungry.

A brunch hot spot in downtown Minneapolis, especially on weekends when live music is thrown into the mix. The design of the underground restaurant embraces the Hell’s Kitchen name, as you see a chandelier of knives dangling over your head on the way in. Get things started with the half-pound caramel pecan roll.

Looking for a twist on an American classic? Stop at the unassuming Matt’s Bar, one of two Twin Cities restaurants that claims to have invented the “Juicy Lucy.” While the concept of cheese on the inside of a burger has spread recently, you can’t beat going to the source, nor can you beat the price ($7.50).

Quang is a Vietnamese restaurant with a loyal following, and for good reason. It’s a great place for pho and fresh spring rolls. The restaurant is located in a middle stretch of Nicollet Ave. known as Eat Street, and is frequently jammed with customers. With a menu packed with appetizing options, you’ll likely want to glance at the menu online before going.

If you want a quick and easy meal, look no further than Lu’s Sandwich. The restaurant, which has two locations and a food truck, serves a great bahn mi sandwich.

You’ll want to make a reservation if you’re headed to Young Joni. The award-winning restaurant makes a wide variety of unique pizzas in a fine dining environment. Led by James Beard semifinalist chef Ann Kim, the restaurant has a dimly-lit, but airy design and a menu that matches the decor. Try the La Parisienne pizza, but make sure to save room for the Church Basement Cookie and Bar Plate dessert. 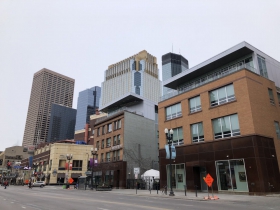 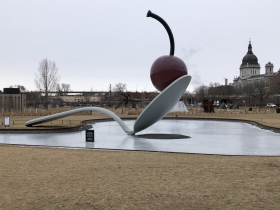 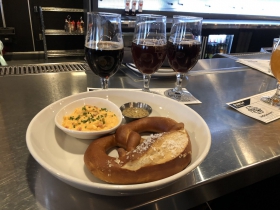 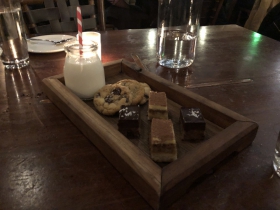 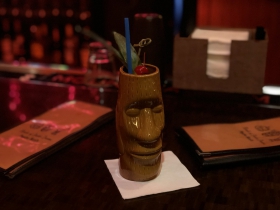 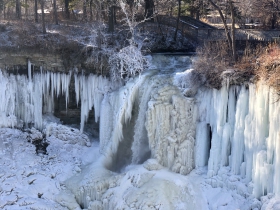 This North Minneapolis brewery will soon open a Milwaukee outpost, but we always recommend going straight to the source. The taproom isn’t packed with bells and whistles, placing the focus on the beer. Thankfully, the beer doesn’t disappoint.

What happens if you mix a supper club with a tiki bar? You get Pyscho Suzi’s. The northeast Minneapolis bar and restaurant is located along the Mississippi River, but features a drink list that is positively Caribbean. In the summer it has a great patio along the river, in the winter it’s a tropical hideaway.

Dangerous Man features a wide variety of brews in a corner bar style space. The welcoming atmosphere makes it a great place to stop in for one, or two, or maybe even three.

Surly is the 800-pound gorilla of Minneapolis breweries and looks and feels the part. But that doesn’t mean it isn’t worth your time. The tables are many, the taps are plenty and the beer is good. While you can find a handful of Surly beers in Wisconsin, in the brewery you’ll get a dizzying array of options.

I stumbled upon Gluek’s by chance years ago, and now it’s a must-visit every time I have a night out in downtown Minneapolis. It’s packed with history, a great beer list and good bar food. The restaurant and building it inhabits are named after Gluek’s Brewing Company. Founded in Minneapolis in 1857, the brewery built a number of tied houses before going out of business, including this namesake restaurant. And while the brewery is long gone, the beer lives on thanks to a Colorado brewery.

Hidden in the basement of a nondescript office building in Uptown, Volstead’s Emporium feels every bit the part of a Prohibition-era speakeasy. Even the front door, which has only a small slat to see out of, plays a part. The Uptown neighborhood has a number of great spots worthy of your time, but Volstead’s should be at the top of your list. The cocktail list is worth the difficulty you’ll have finding the place.

Downtown Minneapolis has a number of hotel options, but I was particularly impressed with the AC Hotel Minneapolis on my last trip. The Marriott-brand hotel features a welcoming, modern lobby, well-appointed rooms and direct skyway access. Less than three years old, the modernity the hotel projects isn’t the result of renovation-after-renovation, but a purpose-built design. And having visited in the midst of marathon training and fighting bad weather, I’m happy to say the gym beats those of many hotels.

How to Get Around

You always have options to get around Minneapolis. The city has a comprehensive mass transit system, with two light rail lines and a well-designed network of bus routes. Many of the city’s neighborhoods are pedestrian friendly, making walking a pleasure. Minneapolis is also one of the most bike-friendly cities in the country and has a robust bike-sharing system, Nice Ride.

If the weather is inclement, Downtown has the largest skywalk network in the United States, but don’t expect to use it reliably on nights or weekends. And if you’re in a hurry, ride-hailing companies Uber and Lyft both offer service in the area and almost any pairing of places we recommend will be about a $10 ride.

How To Get There

From Milwaukee, there are a number of relatively hassle-free ways to get to Minneapolis. Plus, never doubt the ability of a Midwesterner to head out on a road trip.

We recommend taking Amtrak’s Empire Builder train. It’s effectively the same speed as driving, but with none of the hassle. You can bring your own food or beverages (including alcohol) on board, or eat in the dining car. You can relax in the large seats, or check out the scenery from the lounge car.

One thought on “Urban Travel Guide: Weekend Getaway to Minneapolis”