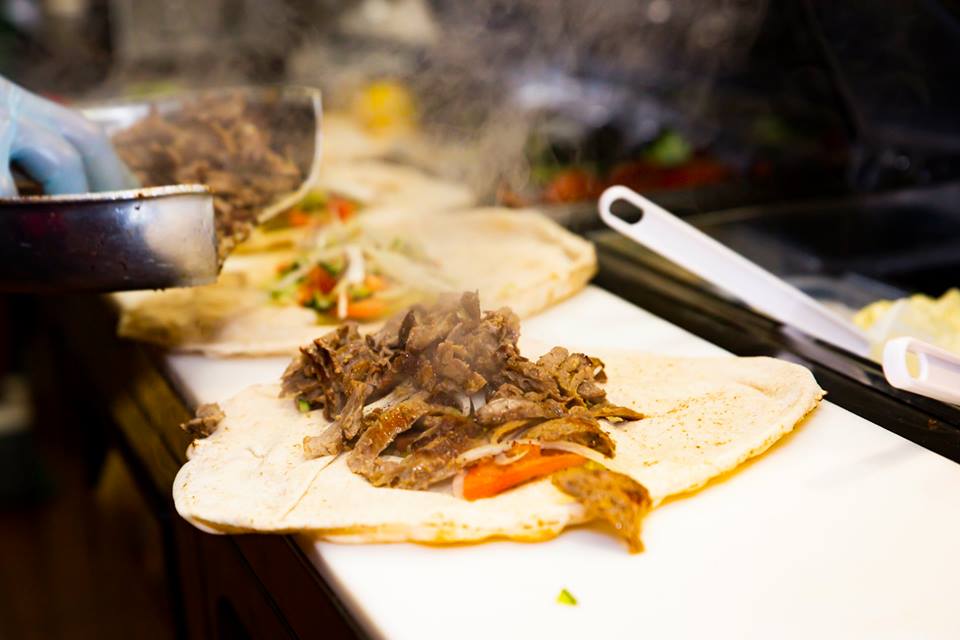 The new restaurant’s menu is smaller, but is still similar to that of the original location. OMC’s Lori Fredrich offers more:

Entrees like the mix grill include options like chicken shish tawook, a flavorful marinated chicken kebab that’s eaten widely across the Middle East from Turkey and Lebanon to Syria, Palestine and Iraq and beef kufta, a ground meat kebab which is notably tender – even juicy – with a meaty flavor that’s redolent of garlic. It’s lovely with the bright tahini sauce, which cuts the fattiness a bit.

There are also falafel, shawarma, kebab and kufta sandwiches and platters along with a selection of salads including fattoush, tabbouleh, Jerusalem and Arabic.

The restaurant has options for catering, delivery and carry out. Pita Palace is open from 11 a.m. to 12 a.m. Sunday to Thursday and 11 a.m. to 2 a.m Friday and Saturday.

A seafood concept will occupy the final stall at Crossroads Collective food hall (2238 N. Farwell Ave.). The stall will be known as Raw Bar, and is the creation of brothers Jonathan and David Manyo. Jonathan Manyo is both chef and owner of Morel (430 S. 2nd St.). Joe Elmergreen, Morel’s general manager, is also a partner in the business. The stall is expected to open mid-to-late March.

According to Jonathan Manyo, Raw Bar’s concept is “completely the opposite” of Morel’s, as the Journal Sentinel’s Carol Deptolla reports:

Raw Bar’s menu will include some sustainable and seasonal seafood, such as stone crab claws, which are available into April. (Stone crabs aren’t killed; the claws are harvested, and the crabs regenerate them.)…

The stall will have seafood such as raw oysters, king crab legs and crab claws.

Other menu items likely will include a ceviche of the day, lobster roll, shrimp cocktail, fresh albacore tuna melt and soups such as clam chowder and lobster…

A number of menu items will be at market price, with prices likely topping out at $20. Oysters on the half shell can be ordered by the piece and will range from $1.75 to $3.

The wait is almost over for the second tenant at the Bucks’ Entertainment Block. Punch Bowl Social is gearing up for its grand opening party on March 9. Along with bowling and karaoke, the “eatertainment” concept offers arcade games, billiards, giant Jenga, ping pong, bocce and foosball.

Urban Milwaukee offered a sneak peek of the food and drink menu:

The James Beard Foundation has named six individuals and one bar in Milwaukee as its 2019 semifinalists.

Urban Milwaukee reported on the nominees:

Karen Bell, owner of Bavette La Boucherie (330 E. Menominee St.), has been nominated for Best Chef Midwest for the third year in a row…

The Foundation will announce its finalists on March 27. The James Beard Awards Gala will be held at the Lyric Opera of Chicago on May 6.

Brew City MKE permanently closed on Sunday, March 3rd. The museum and tavern, which were a Milwaukee County Historical Society site, were located inside the former Applebee’s space at the Shops of Grand Avenue (275 W. Wisconsin Ave.).

The museum’s former location, along with the Grand Avenue Mall itself, will soon be replaced by a mixed-used development, named “The Avenue.” However, MCHS may still have some plans for Brew City MKE.  MCHS executive director Mame McCully spoke with Urban Milwaukee about the museum’s future:

According to the announcement, MCHS is already looking for a new location for the museum. “We’d love to continue, it just needs to be in a different place,” said McCully. “If we’re going to continue it needs to be in the right place and at that point, permanent.”

McCully also notes that while the pilot museum is ending, the Milwaukee County Historical Society operates a research library and four historic sites throughout the city: Trimborn Farm, Jeremiah Curtin House, Lowell Damon House and Kilbourntown House. More information about MCHS is available on their website.