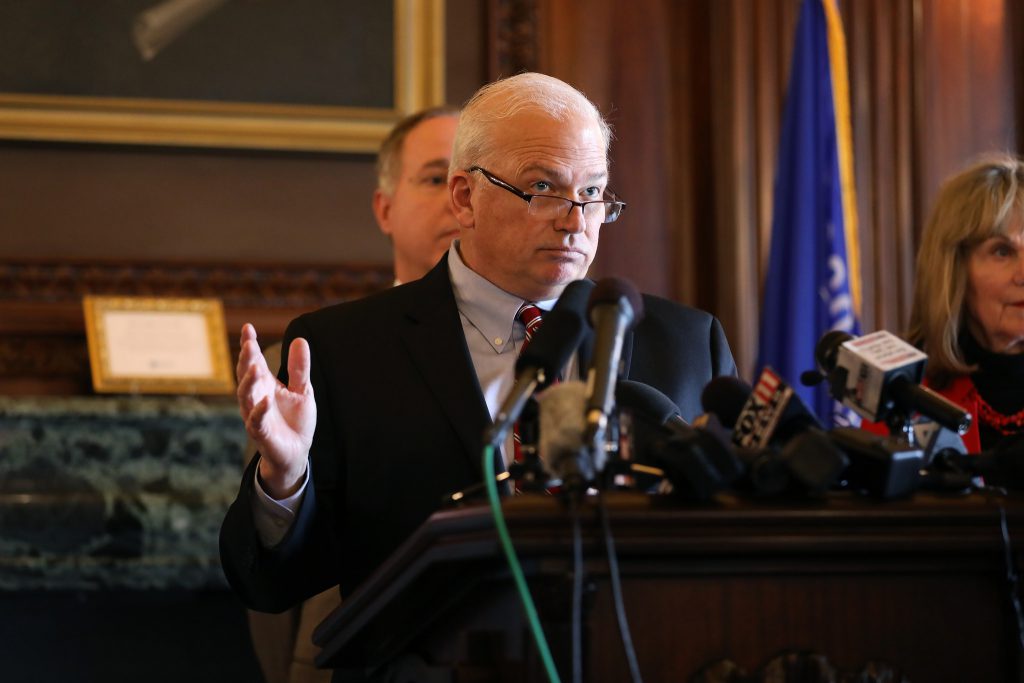 Senate Majority Leader Scott Fitzgerald, R-Juneau, speaks during a press conference on Dec. 3, 2018, at the Wisconsin State Capitol ahead of the Joint Finance Committee public hearing to discuss bills voted on during an extraordinary session of the Legislature, held on Dec. 4 and 5, 2018. Photo by Coburn Dukehart/Wisconsin Center for Investigative Journalism.

We just had an election wherein the outcome was clear, the people of Wisconsin sought change and elected a new Governor. Now should be a time of peaceful transition, but instead we have just witnessed an unprecedented power grab by Republicans in the state legislature.

The recent passing of President George H.W. Bush is a stark reminder of how far our country has come since the days when good people from both sides of the aisle could work together in mutual respect.

In his note to his successor, President Bill Clinton, President Bush wrote, “Your success now is our country’s success. I am rooting hard for you.”

After a lifetime of service to his country, President Bush understood what most of us take for granted: Democracies are only functional when citizens are confident in the peaceful transfer of power after the conclusion of an election.

Eight years later, President Clinton would write to President Bush’s son, George W., the following: “And from this day you are President of all of us. I salute you and wish you success and much happiness.”

My sympathies are with my Republican colleagues; I know too well the pain of losing an election. As state Senator, I have had the privilege of serving when both my party held power and when it lost it.

But when I entered office in 2011, I swore to uphold the constitutions of the United States and the state of Wisconsin. I pledged, just as Scott Walker did, to respect the rule of law and the democratic process.

In an unprecedented move, Scott Walker’s Republican-controlled legislature pushed a series of bills in a lame-duck session to remove checks and balances from our state government.

This package of bills, rammed through committees in the dead of the night, are designed to rig elections and consolidate power in the hands of a few. Never in Wisconsin’s history have we faced such an attack on our state Constitution and the democratic process.

On Monday December 3rd, prior to the lame-duck session, Senate Majority Leader Scott Fitzgerald stated “We trusted Scott Walker and the administration to be able to manage the back and forth with the Legislature. We don’t trust Tony Evers right now in a lot of those areas.”

It is important for elected officials to remember that we can disagree with each other on policy, but elections are never about one person. We were elected to serve the people of Wisconsin regardless of who is elected alongside us. Taking extraordinary measures to limit the power of an office because we might not “trust” the person that was elected to that office is a slap in the face to the citizens of Wisconsin that voted for change on November 6th.

We must never make the mistake of thinking that we were only elected to serve the voters who agree with us. Wisconsin’s working families deserve a legislative body where elected officials can work across the aisle and with the governor to solve Wisconsin’s toughest problems.