By Laurel White, Wisconsin Public Radio - Nov 28th, 2018 10:44 am
Get a daily rundown of the top stories on Urban Milwaukee

Under the proposal from Gov. Scott Walker, the company would receive up to about $70 million in payroll and construction tax credits over 15 years. The package is aimed at preserving about 400 jobs at Kimberly-Clark’s Cold Spring facility in Fox Crossing near Neenah. The company announced plans to close that and another nearby facility in January.

Fitzgerald said several Republican senators do not support the plan, which means it would need votes from Senate Democrats to pass.

“The votes are not there as of today,” he said Tuesday.

“Sen. Roth is still talking to members of the Senate on both sides of the aisle,” Fitzgerald said.

“It’s become clear that Republicans never intended this lame duck session to be about saving jobs at Kimberly-Clark,” Shilling said in a statement. “They haven’t made any effort to build consensus and reach an agreement to keep these jobs in Wisconsin.”

The governor had laid out a Nov. 30 deadline for the deal, which passed the Assembly in February, but Fitzgerald indicated a December vote could occur.

GOP lawmakers also discussed a proposal to move the date of the 2020 presidential primary, which is currently scheduled for April.

Some Republicans, including Walker, have argued the primary shouldn’t be held on the same day as the state Supreme Court election, because the court race is officially nonpartisan.

Democrats have criticized the move. They argue it is aimed at circumventing strong Democratic turnout for the presidential primary, which could hurt conservative-backed state Supreme Court Justice Daniel Kelly, who is up to re-election that year.

“There’s many people that think Justice Kelly would have a better chance if there’s not this competitive Democrat primary for president,” Fitzgerald said. “I think (Kelly’s) campaign would be just as concerned that that would be a criticism used against Kelly in the end.”

However, Fitzgerald acknowledged other concerns with the bill, including some raised by county clerks.

“It’s pretty easy to see the logistical issues it could create,” he said.

Other potential bills for the extraordinary session include changes that would limit Gov.-elect Tony Evers’ power when he takes office. Those include changes to the Wisconsin Economic Development Corp. board and the rules surrounding Wisconsin’s voter ID law.

Fitzgerald said changes to the WEDC board are still on the table. That proposal is aimed at limiting the power of gubernatorial appointments on the board, as Evers has said he supports eliminating the agency.

Fitzgerald also said plans are still on track to formalize some of the rules surrounding Wisconsin’s voter ID law. That change would make the rules more difficult for Evers to alter after he takes office. 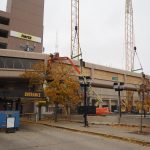