Milwaukee will get a new flag, but how or what remain big questions.

The Milwaukee Arts Board is now hours deep into debating the merits of the People’s Flag and the process that selected it, but appears no closer to rendering a decision on that particular flag.

The 17-member board is debating the issue after the Common Council punted the issue over to them in late July with the stipulation that a decision on a new flag come back by the end of the year.

The full board decided Tuesday that the city needs a new flag, but a subcommittee wasn’t prepared to recommend anything else. “We have discussed and agreed that we need a process,” said flag subcommittee chair Bill DeLind. Members of the subcommittee also informed the full board that a Legislative Reference Bureau study has found that official adoption of a new flag would cost the city approximately $3,000.

Summarizing why the city needs a new flag, Alderman Nik Kovac stated: “I don’t think there’s anyone who thinks the old Braves logo is appropriate.” The current flag, from 1955, features an homage to the Milwaukee Braves baseball team with a Native American head in wardress. The team left Milwaukee for Atlanta in 1965 and has seen its logo become the source of controversy. 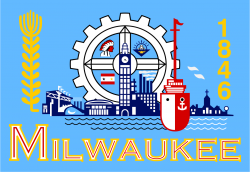 The official flag of the City of Milwaukee.

The issue has come to a head after widespread community adoption of the “People’s Flag of Milwaukee” that was chosen from a 2016 design contest. The “People’s Flag,” known originally as Sunrise Over the Lake, was designed by Robert Lenz and selected from over 1,000 entries in a design contest held in 2016 by graphic designer Steve Kodis. The entries were narrowed to a field of five by flag expert Ted Kaye, Milwaukee native Xavier Ruffin, graphic designer Jena Sher, historian John Gurda and Kodis. An online ranked-choice voting process was held to select the winner. Mayor Tom Barrett and Council President Ashanti Hamilton were present during the unveiling of the finalists and Reggie Jackson, head griot at America’s Black Holocaust Museum, gave a keynote speech at the event.

The Arts Board’s flag subcommittee has met twice, including most recently with the coalition behind the People’s Flag effort, and intends to meet again in the coming weeks to debate the flag and the process that selected it. Kodis, Jackson, Greater Together chair Ken Hanson and Def Perception branding specialist Los Glover spent over an hour answering questions on the flag selection process.

DeLind, who initially trashed the People’s Flag at the first subcommittee meeting appears to have softened, if not reversed, his position. At the first meeting, DeLind said: “I don’t like the flag. Even if I hear what they have to say, I probably still won’t like it.” But on Tuesday he told the committee that the presentation was “very informative” and that Kodis and team did a “good enough” job getting the 1,000 submissions. “Yes, we have a lot of work to do, but it was a very good presentation. Many of our questions were answered,” said Delind.

Subcommittee members clearly still have reservations about certain aspects of the process. David Flores, a veteran theatrical performer who works in the administration of the Housing Authority of the City of Milwaukee, said there were points in the People’s Flag process that city employees would have raised issues with right away. “We will give you a full report on what we thought was good or lacking,” said Flores.

How Long Could This Go?

The board could bless the People’s Flag, create a new design contest or shelve the entire matter altogether. They could also solicit more designs and simply refer them back to the council, with the legislation allowing the “possible recommendation of one or more designs.”

Kovac, serving as chair in the absence of Ald. Michael Murphy, suggested the board could also do something else. “Our recommendation could be we recommend [the Common Council] give us more time.” The alderman characterized his displeasure with the December 31st, 2018 deadline, introduced in an amendment by Ald. Mark Borkowski, as “an unnecessary rush to a generational decision.”

Arts Board members expressed reluctance to make a choice on what to do next. “My big concern is no matter what happens there are going to be really offended people here,” said Sandra McSweeney. Lynden Sculpture Garden director Polly Morris suggested one way to put the issue to rest: simply eliminate the official city flag. Morris also suggested that if the process is to be redone, a consultant should be hired to draw up a proper request for proposals.

Tina Klose suggested another way to get the issue over with at an earlier subcommittee meeting. “It’s already out there,” she noted. “It’s stickers. It’s bicycles. It’s beer. It’s (on) everything. I don’t think we can rein [the People’s Flag] back in.” Perhaps, she suggested, “We can just adopt it, get on with our life, get back to work.”

McSweeney suggested yet another solution: “The old flag could be redone.” The Native American head and other elements could be replaced.

That would slightly change a flag that design experts have dubbed the worst city flag in America. And it would have to be done without the old flag’s creator, who’s long since passed from the scene.

Milwaukee’s original flag was a mish-mash created when the Common Council didn’t select a winner from a 1954 design contest, and Ald. Fred Steffan took elements from the entries and assembled them into a sort of super flag that the council adopted in 1955. Who would have imagined this non-designer’s work would last so long?