Should the People’s Flag of Milwaukee be adopted as the official city flag?

That’s the central question the Milwaukee Arts Board is grappling with after the Common Council punted the issue over to them in July. They’re required to render a decision back to the council by December 31st and don’t appear close to doing so.

The 17-member board created a subcommittee to study the issue. That group, chaired by former gallery owner Bill DeLind, met for the first time on September 25th to debate what to do and came up with more questions than answers.

The one thing everyone agreed on was the need for a new flag, regardless of what it is. David Flores moved to adopt the position, telling his fellow committee members: “there is at least one element in our current flag that people object to very, very strongly.” Flores was referring to the depiction of a Native American head in wardress on the 1955-designed flag, which is believed to be designed as a representation of the then-Milwaukee Braves professional baseball team. 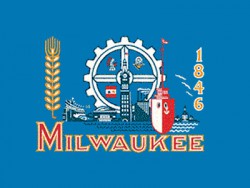 The current flag, which has been derided as the worst city flag in America, was created by then-Alderman Fred Steffan by merging elements from a variety of design contest entries into a single flag.

But with the desire for a new flag settled, the committee then spent a considerable amount of time debating what to do next.

One chief concern was the cost of a new flag which could range from $3,000 to $300,000 according to a report from the Legislative Reference Bureau. Legislative analyst Tea Norfolk told the committee there are two primary cost drivers. The straight-forward component is replacing all of the flags on display at city buildings, something that would cost approximately $3,000. The more complicated matter is replacing the image of the flag on the driver’s and passenger’s side of every city vehicle. Replacing the seals would cost $16 per seal, but doing so as the vehicles are replaced would result in no new cost for the city. The more aggressive measure, replacing every decal as fast as possible, would cost $252,412.50 according to the Department of Public Works.

The more difficult matter is what to replace the flag with. The committee was torn on its view of the proposed People’s Flag and how equitable its selection process was.

The “People’s Flag,” known originally as Sunrise Over the Lake, was designed by Robert Lenz and selected from over 1,000 entries in a design contest held in 2016 by graphic designer Steve Kodis. The entries were narrowed to a field of five by flag expert Ted Kaye, Milwaukee native Xavier Ruffin, graphic designer Jena Sher, historian John Gurda and Kodis. An online ranked-choice voting process was held to select the winner. Mayor Tom Barrett and Council President Ashanti Hamilton were present during the unveiling of the finalists and Reggie Jackson, head griot at America’s Black Holocaust Museum, gave a keynote speech at the event.

The committee decided to schedule a presentation by Kodis and other leaders of the People’s Flag selection process, but that didn’t stop some committee members from weighing in with opinions before hearing from the flag’s creators.

Subcommittee chair DeLind is not a fan of Lenz’s work. “I don’t like the flag,” he said. “Even if I hear what they have to say, I probably still won’t like it.” He said he just learned of the new flag a few weeks ago. Mildred Harpole knew even less. “I never even saw the [new] flag until we started talking about this,” she said.

But Tina Klose raised the potential for the worst possible outcome for the committee. “Say we do the whole competition over, we get a design, half the people like it, half the people don’t, we’re still in the same boat. But we have this third flag now to adopt? The People’s Flag is still out there. It’s stickers. It’s bicycles. It’s beer. It’s everything. It’s already out there. I don’t think we can rein it back in,” Klose stated. Perhaps, she suggested, “We can just adopt it, get on with our life, get back to work.”

But she didn’t find support from her colleagues. “I don’t think our charge is to give up… that’s why it was sent to us,” offered Flores. “Just because it’s all around doesn’t mean we have to adopt it.”

The subcommittee decided to hold any future action until hearing a presentation from Kodis and his team on their process. The People’s Flag campaign is scheduled to present to the subcommittee at 4 p.m. Tuesday, October 2nd in room 303 at city hall.

About Sunrise Over the Lake

The committee spent a lot of time debating what the flag represents, but according to the People’s Flag campaign website there are clear symbols in the flag:

The gold color of the top fess symbolizes Milwaukee’s rich brewing history. Once known as “The Beer Capital of the World,” Milwaukee is affectionately referred to as the “Brew City” to this day.

The centered disc represents the sun rising over the horizon of Lake Michigan, as seen while looking East from the shore of the city. The sunrise symbolizes hope and a new day. Universally, the color white represents peace and unity. To many Milwaukeeans, this color has also come to symbolize our long winters.

The three stripes in the sun’s reflection represent the founders of Milwaukee and its three original settlements: Kilbourn Town, Juneau Town and Walker’s Point. Their light blue colorsymbolizes our three rivers: Milwaukee, Menomonee, and Kinnickinnic.

The navy color of the bottom symbolizes Lake Michigan and our status as a port city and hub for water technology.