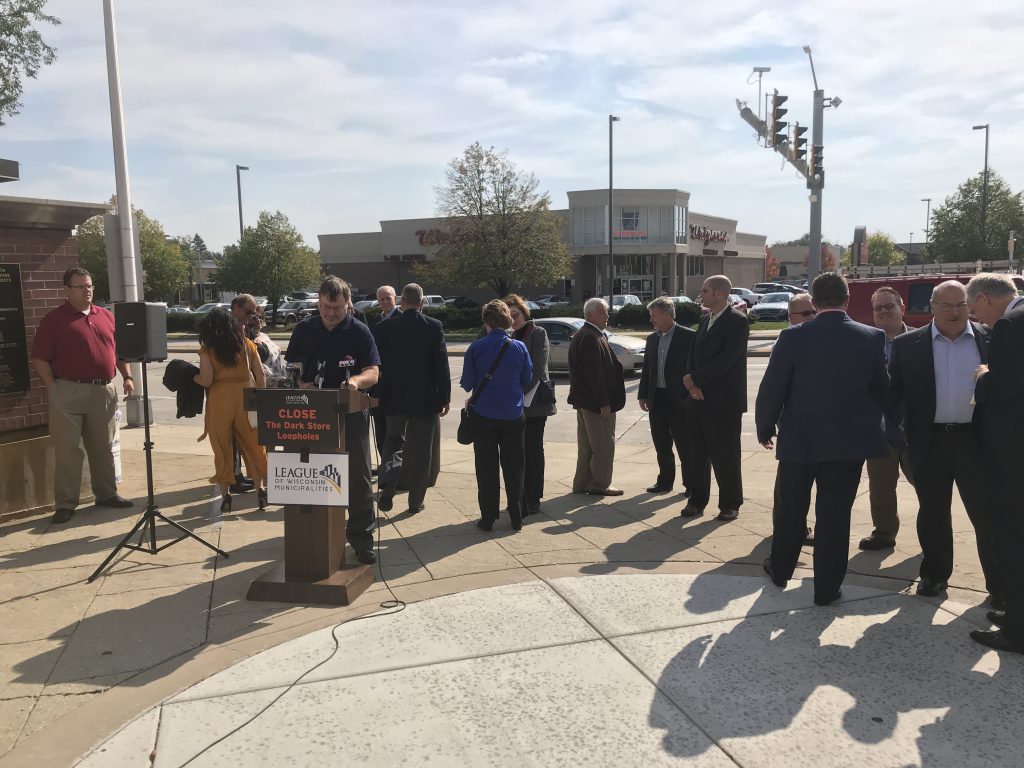 Local leaders gather in front of a Walgreens in West Allis. Photo by Graham Kilmer.

Leaders from local governments around Milwaukee County gathered Monday in front of a West Allis Walgreens to publicly call for an end to tax loopholes benefiting corporations like it, and costing local governments millions.

These loopholes are called the “Dark Store loophole” and the “Walgreen’s loophole.” They each greatly reduce the property taxes that major corporations pay for their stores and also open cities and municipalities up to costly legal action.

The Walgreen’s loophole comes from a 2008 decision by the Wisconsin Supreme Court that allows the stores they lease to be assessed significantly lower than market value. And the Dark Store loophole allows big box stores like Menards to have their operational properties assessed like they’re vacant.

A group of mayors and village presidents sent a letter Monday to Governor Scott Walker and his Democratic opponent, Superintendent Tony Evers, calling upon them to address these loopholes. It has the signatures of 17 mayors and presidents and County Executive Chris Abele.

The effect of these loopholes is that property tax revenues from these large companies and corporations go down, and the tax burden paying for essential services like police and fire is shifted to homeowners and small business owners. Some communities can see their property taxes increase by as much as 8 percent when companies take advantage of the loopholes. It also opens municipalities up to legal action. These companies sue local governments to achieve the reduction in taxes and money back from previous tax bills, sometimes costing local taxpayers hundreds of thousands of dollars a year. For example, Wauwatosa has spent more than $2 million on outside litigation related to these loopholes in just the past three years, according to Mayor Kathy Ehley. Wauwatosa has 11 properties that are currently in litigation.

And the issue is not obscure. The phenomenon has been widely reported throughout the state, where nearly every county has called upon the state legislature and governor to get rid of these loopholes. There are bills sitting in the legislature and have been for almost a year without being called up for a vote, despite the fact it has broad bipartisan support and dozens of co-sponsors.

Barrett was clear that the cities and villages aren’t asking the state for more money. Rather, they’re asking the state to stop these companies from shifting their tax burdens onto homeowners.

The press conference was held Monday in West Allis in front of a Walgreens at the corner of W. Greenfield Avenue and S. 84th Street that illustrates the Walgreens loophole. The building has been listed for sale at more than $5 million, but is assessed at approximately $1.8 million, Devine said. In Franklin, Menards has a property that shows the Dark Store loophole playing out. Franklin Mayor Steve Olson said the company spent $15 million on the new store and it was valued at over $10 million, and today, Menards is suing Franklin to make their assessment $5.5 million.

“We’re currently being sued by Menards, Walmart, Sam’s Club, we just settled with Lowes,” Olson said. “And all of these are looking for money back.”

Mayor Dan Devine of West Allis said his city held a referendum and found that 91 percent of voters favored closing the tax loopholes. Some 22 other municipalities will follow suit with West Allis this November and hold referendums on the loopholes. Among them will be Glendale, represented by State Senator Alberta Darling, chair of the Legislature’s powerful Joint Finance Committee.

“We’re trying to send a message to state Senator Darling that her constituents want to see this put up for a vote,” said Glendale Mayor Bryan Kennedy. Michael Neitzke, mayor of Greenfield, said he and the signatories of the letter, “have to become lobbyists without a wallet to do any lobbying.”

Kennedy said leadership in the Assembly and the Senate won’t bring the bills up for a vote because they’ve been successfully lobbied by the Wisconsin Manufacturers and Commerce and other special interest groups and the corporations themselves.