The Best Governor Money Can Buy

Just about every Walker policy was bought by special interests. 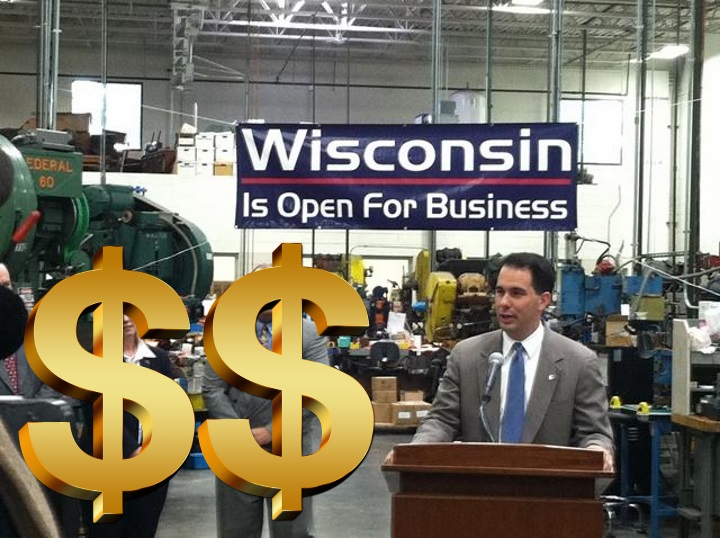 On Tuesday Gov. Scott Walker accused his Democratic candidate Tony Evers of being “bought and paid for” by special interests, namely labor unions, which contributed $1.5 million to the state Superintendent of Public Instruction in his three campaigns for that office.

Once upon a time, $1.5 million would have been a notable amount of money for a state campaign, but that was before Walker obliterated all spending records in Wisconsin, getting some $100 million in donations to his three gubernatorial campaigns, plus more than $42.6 million in spending by outside interests, according to the Wisconsin Democracy Campaign. No governor in state history has gotten more money from special interests, and none have been so willing to champion policies these groups favor.

Two of his biggest supporters have been the Koch Brothers, who have donated $4.8 million to Walker’s campaigns, and the state’s biggest business group, Wisconsin Manufacturer’s and Commerce, which has given $9.5 million to his campaigns.

Walker’s signature law, Act 10, which decimated public employee unions, was backed the Koch Brothers and WMC. The two groups also supported the Right to Work law, which makes it difficult to organize private unions and which Walker had promised unions supporting him in 2014 that he would never support. But he signed it into law in 2015.

The full list of laws supported by the Kochs and WMC which Walker signed is too long to include but here are some highlights:

They supported the Manufacturing and Agriculture Credit, a tax cut that has cost the state some $1.4 billion and which has had a negative impact on jobs, leaving the state badly trailing the nation in the creation of manufacturing jobs.

The two groups supported Walker’s policy making it harder for people to get food stamps and a law Walker signed that allows an estimated 100,000 acres of wetlands to be destroyed, which was called the worst conservation bill in a generation by the Wisconsin Wildlife Federation. They also supported a far-ranging law signed by the governor that makes it much harder for state agencies to amend or create new rules to protect the environment, consumer rights, public health and safety and other areas of concern.

Even a slight connection to the Koch Brothers seems to count. Walker backed off from a plan to create a The Wisconsin-Lake Michigan National Marine Sanctuary encompassing 1,075 square miles of Lake Michigan and protecting 37 shipwrecks and 80 unexplored potential shipwrecks, after opposition arose from an activist connected to the Koch Brothers and from Tea Party activists.

By itself the WMC has had massive clout with Walker, bragging that it has won policy victories “too numerous to mention,” including repeal of the state’s moratorium on metals mining; repealing the state’s alternative minimum tax, which is generally paid by wealthier taxpayers; repealing the personal property tax exemption on machinery, which is estimated to save businesses $74 million a year; and approving the massive Foxconn subsidy, which has grown to $4.1 billion in state and local incentives.

Walker signed a law backed by the WMC and opposed by environmental groups, which no longer classifies slag as solid waste in some cases, though it can be contaminated with thallium and manganese. Other laws pushed by WMC which he signed include one loosening state restrictions on fish farms and a law giving businesses more protection from civil lawsuits, including reducing from six to three years the statutes of limitations for lawsuits involving liability, fraud, rights violations and injury to character.

And Walker favors a state subsidy for Kimberly-Clark that would give the company the highest giveaway per job in state history, tied with that given to Foxconn. This, too, is supported by the WMC, and of course by Kimberly-Clark, whose executives and employees gave the governor $5,340.

Walker’s creation of the Wisconsin Economic Development Corporation (WEDC) to replace the Department of Commerce has been a dismal failure at creating jobs, but a roaring success at garnering campaign donations. One Wisconsin Now found that 60 percent of the money awarded by WEDC went to companies that donated $2.1 million to Walker. And a Legislative Audit Bureau report found that of hundreds of millions in tax credits, grants and loans authorized since 2011, the WEDC “cannot be certain about the number of jobs actually created or retained as a result of any awards.” In fact only 12.5 percent of contract awards “even had an expected result of job creation or retention.”

Another big Walker donor is the National Rifle Association, which spent $3.5 million to elect Walker in his first three campaigns for governor, and he has backed numerous pro-gun bills, including the concealed carry law and eliminating the 48-hour waiting period to buy a gun.

Big Agriculture has also been a big Walker supporter and beneficiary. Under Walker the state DNR has been much less tough on pollution caused by agricultural interests, which had donated $33 million to Walker by August of 2016. The DNR also backed a 2017 legal settlement giving factory farms more leeway to discharge waste. And Walker signed a bill supported by agricultural groups and the WMC which reduces state oversight of high-capacity wells, which have caused some rivers, lakes, and streams to shrink or dry up during the summer, damaging fish, wildlife and habitat.

Walker even supported a law legalizing hemp which farm groups who gave the governor $1.3 million wanted.

Another Walker ally is the real estate industry, which has contributed $3 million to the governor and gotten laws it supported passed. Walker signed a law restricting inspections of rental properties by local governments checking for electrical, plumbing, rodent, or mold problems and other possible violations. Another law reduced state lead painting inspection and testing requirements and another makes it easier and faster for landlords to evict tenants and dispose of personal property that is left behind, as the Wisconsin Democracy Campaign reported.

And let’s not forget the always powerful construction industry, which has donated $6 million to Walker. In return, “nearly six dozen bills back by the builders association have become law, mostly since 2011 when Walker and GOP legislators gained control of state government,” the WDC noted.

Often times bills signed by Walker were supported by a constellation of groups donating to him, including a law that restricts the ability of local governments to control storm water runoff and resulting pollution, erosion and flooding. The law was supported by the construction, real estate, and agriculture industries, who together had donated $15.3 million to Walker.

Walker also supported the expansion of state spending on school vouchers and in return received $1.3 million from wealthy, pro-school choice donors; he got $483,000 from public utilities and signed a bill giving them more power in rate disputes; and got $161,000 from logging and paper making companies and signed a provision allowing the logging of 335,000 acres in the Brule River, Black River, Coulee, Peshtigo River, Northern Highland American Legion, and Flambeau River state forests.

There’s probably a political science book to be written some day on how the Walker era exemplifies the power of special interests in American government. Republican legislators were so appalled by how Walker larded his 2017-’19 budget with giveaways, many requested by special interests, that they removed 83 items.

Walker has often portrayed himself as the victim of outside spending, and his latest attack on Evers is an example of that. Yet, in 2015, the governor signed into law a bill that has made it much easier for wealthy individuals and outside groups to spend money in Wisconsin’s elections. And with good reason, for Walker has been a master at grabbing such money, for instance, raising $36.1 million from January 2011 to June 2012. Nearly $22 million, or 64 percent of the contributions, came from people outside the state in the banking, manufacturing, construction, real estate and other powerful sectors, from states like Florida, Texas, New York, Missouri, Nevada, Wyoming and New Jersey.

Odds are they were later rewarded with legislation signed by Walker.

5 thoughts on “Murphy’s Law: The Best Governor Money Can Buy”