Company demands subsidy by September 30. Why that won’t happen. 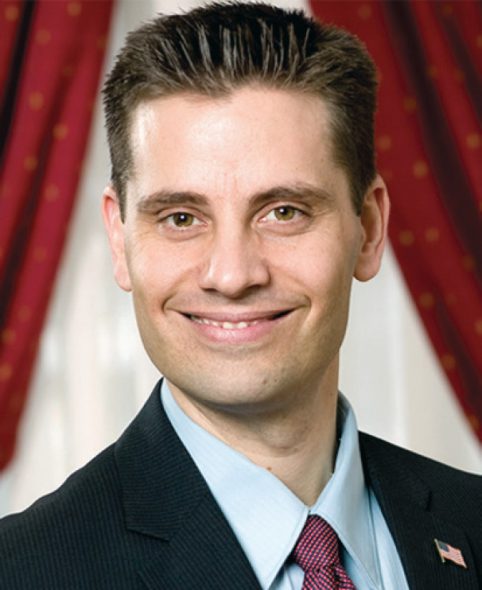 Chris Kapenga. Photo from the State of Wisconsin Blue Book 2013-14.

“This allows us to finalize our project plans and minimize the uncertainty and distractions being felt at our various sites,” he added.

Senate Majority Leader Scott Fitzgerald, who recently joined Gov. Scott Walker in a K-C plant tour, said the company was cutting about 110 jobs and another 500 jobs at its Village of Fox Crossing plant are at risk without an aid package.

Over six days in February, Assembly Republicans introduced, held a public hearing on and passed, on a 56-37 vote, K-C tax breaks the Legislative Fiscal Bureau estimated would total more than $105 million over the next 15 years.

State Senate Republican leaders scheduled the Assembly-passed bill for a March vote but canceled it when it became obvious that it wouldn’t pass the 33-member Senate.

That’s the first reason K-C’s Sept. 30 deadline won’t be met: The package still divides the 18 Republicans who – for now – control the Senate. Voters on Nov. 6 will decide which party runs the Senate in January.

GOP Sen. Chris Kapenga, of Delafield, who has no opponent on Nov. 6, came out against the K-C aid package in July. “This is a precedent that we should not set,” Kapenga said then. “Wisconsin has robust existing programs to promote economic development and job retention that Kimberly-Clark can attempt to utilize, just as any other company can.”

The $2.8 billion in potential tax breaks for Foxconn, which is developing a Racine County manufacturing campus, was a “once-in-a-lifetime opportunity” and “not a template to provide extra benefits to any company who asks,” Kapenga added.

Two other GOP senators may want to avoid a vote on a tax-break package for K-C: Assistant Senate Majority Leader Leah Vukmir, of Brookfield, is running against Democratic U.S. Sen. Tammy Baldwin. And first-term Sen. Howard Marklein, a Spring Green accountant, is trying to fend off Democratic challenger Kriss Marion. Marquette University polls have found the Foxconn aid package is most disliked by residents who do not live in southeast Wisconsin.

Senate President Roger Roth, of Appleton, whose district includes the K-C Fox Crossing plant and who faces a tough re-election fight, and Walker both have said that any aid package for the company cannot pass without Democratic votes.

It would “save plenty of good-paying jobs,” Walker tweeted last week. But, “The only way to pass it is with votes from both parties.”

That’s the second reason why Sept. 30 will come and go without a K-C aid package: No Democrat has yet said they will vote for it.

No Assembly Democrat voted for the K-C aid package on Feb. 22. And even Lee Snodgrass, Roth’s opponent on Nov. 6, opposes the Assembly-passed bill.

“Lee wants any new proposal to provide a sustainable and robust investment in our paper industry – unlike Sen. Roth, who first blocked a vote on this package last session and now wants to water it down,” Snodgrass campaign aide Ryan Lashua said.

One more reason why the Assembly-passed K-C aid package won’t pass soon: Any changes to it would have to be approved by the Assembly, whose Republican leaders don’t want to force their members to return to the Capitol to cast a painful vote weeks before election day.

Assembly Majority Leader Jim Steineke, of Kaukauna, was the chief sponsor of the K-C benefit package that passed Feb. 22. But Assembly  Republicans in tough re-election fights want nothing to do with a second K-C bailout vote.

One more reason why K-C won’t get an answer by Sept. 30? Uncertainty surrounds the future of the Wisconsin Economic Development Corporation (WEDC), the agency that negotiated the Foxconn tax-break package. The Assembly bill requires WEDC to negotiate details – including jobs-saved benchmarks – of any K-C tax breaks.

If elected governor, Democrat Tony Evers said, his proposed 2019-21 budget would eliminate WEDC. He hasn’t said what would replace it, however.

WEDC “has been a constant source of controversy, inefficiency and ineffectiveness,” Evers said.

“Millions have been lost or unaccounted for, with taxpayer-funded loans used to buy luxury cars. Too many Wisconsin communities are left feeling ‘what about us?’”